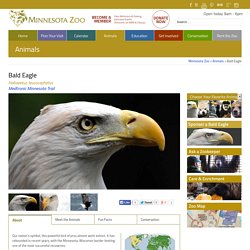 It has rebounded in recent years, with the Minnesota-Wisconsin border hosting one of the most successful recoveries. Fish, ducks, and dead animals (carrion) such as deer. Forested areas near water. In Minnesota, bald eagles nest mostly in the central part of the state, and in winter they can be found along the Mississippi River. Bald eagles nest and hunt along the waterways. Recovering but still protected by law. North America River, Lake, Wetland Temperate Forest/Taiga Length: 3.5 ft Weight: 9-14 lbs (females average 25% larger than males) Wingspan: 6-8 feet Flying Speed: up to 50 miles per hour Lifespan: 20-30 years (wild); up to 50 years (captive) Bird Medtronic Minnesota Trail This female bald eagle is on loan to the Minnesota Zoo from the U.S.

After a year of care at the Raptor Center, the eagle came to live at the Minnesota Zoo. Where to see her: Medtronic Minnesota Trail. BALD EAGLE. Adaptations Penthouse Nests Eagle nests, called “eyries”, are built as high as possible, usually 60-100 feet off the ground, to maintain better visibility. 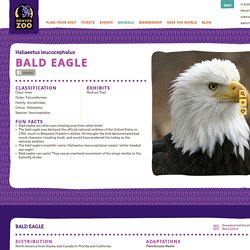 New nests average five feet across and two feet deep. Mated pairs use the same nest year after year, remodeling them by adding feathers, moss, sticks and branches. After repeated use, nests may reach more than 10 feet wide and weigh several tons! Built to Hunt Bald eagles have excellent eyesight, large talons and a hooked beak.

High Flyers. Saint Louis Zoo. Symbol of Our Nation The bald eagle was adopted as our national emblem in 1782. 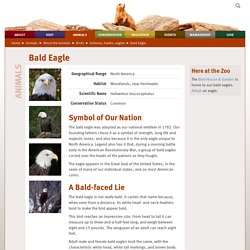 Our founding fathers chose it as a symbol of strength, long life and majestic looks, and also because it is the only eagle unique to North America. Legend also has it that, during a morning battle early in the American Revolutionary War, a group of bald eagles circled over the heads of the patriots as they fought. The eagle appears in the Great Seal of the United States, in the seals of many of our individual states, and on most American coins. Northern bald eagle - Philadelphia Zoo. Female bald eagles are larger than males. 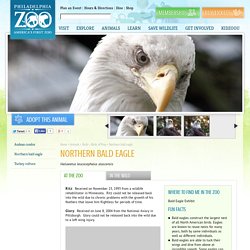 The bald eagle's body feathers are brown-black in color, and their head and tail is a brilliant white. They are fish eagles with powerful talons for seizing fish as they skim the surface of the water. Northern bald eagles inhabit coastal areas, mountain ranges, rivers and lakes. They prefer areas near water. Longevity Although it is not known for certain, northern bald eagles are estimated to live up to about 30 years in the wild. Reproduction Eagles mate for life and make excellent parents. Behavior Eagles travel by soaring and gliding on thermals.

Adaptations The eagle's wing is light in weight but incredibly strong. Los Angeles Zoo and Botanical Gardens Eagle, Bald - Los Angeles Zoo and Botanical Gardens. During winter, groups of bald eagles will gather at the spawning grounds of salmon in the Pacific Northwest, feeding on life fish as well as dead or dying fish that are unable to mate and wash up on nearby shores. 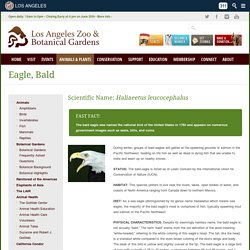 STATUS: The bald eagle is listed as of Least Concern by the International Union for Conservation of Nature (IUCN). HABITAT: This species prefers to live near the rivers, lakes, open bodies of water, and coasts of North America ranging from Canada down to northern Mexico. Bald Eagle. Animals Birds Haliaeetus leucocephalus Did you know that bald eagles can be found in Texas year round? 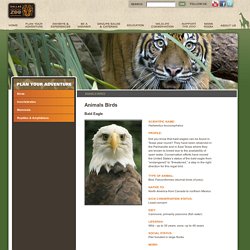 They have been observed in the Panhandle and in East Texas where they are known to breed due to the availability of open water. Conservation efforts have moved the United States’s status of the bald eagle from “endangered” to “threatened,” a step in the right direction for this regal bird. Bird, Falconiformes (diurnal birds of prey) North America from Canada to northern Mexico Least concern Carnivore; primarily piscivore (fish eater) Bald Eagle - HOUSTON ZOO - NATURALLY WILD. Bald Eagle. Taking Wing Even though a bald eagle is less than 4 feet tall, its wings more than make up for it—they span 5 1/2 to 8 feet! 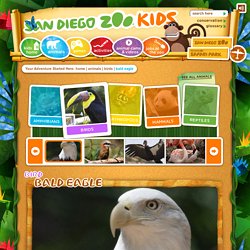 And these birds know how to use them—a bald eagle can reach a speed of up to 200 miles per hour when diving through the air to grab a meal. These wings are really "in tune," because when a bald eagle loses a feather on one wing, it also loses a matching one on the other wing; this way the bird stays balanced. You may have heard someone say you have "eagle eyes. " You should take it as a compliment, because it means you can see things that others might not notice. Bald Eagle. Bald eagles live near bodies of water to be close to their favorite food—fish! 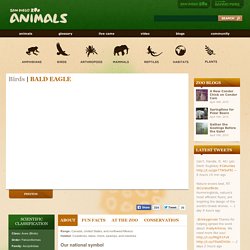 No need for a fishing pole—bald eagles come equipped with spiny scales and sharp talons on their toes for grabbing fish. Rough pads on the bottom of each foot also help grip this slippery food. A hungry eagle waits on its favorite perch until it spies a fish near the surface. It can swoop down on the water and snatch a fish with those special feet. Then, holding tight, the eagle flies back to its nest or a convenient perch in a tree to enjoy its meal. Bald Eagle Fact Sheet.