Brazil's forgotten state: oil and agribusiness threaten Amapá forests – in pictures. We are destroying rainforests so quickly they may be gone in 100 years. If you want to see the world’s climate changing, fly over a tropical country. 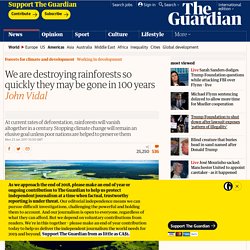 Thirty years ago, a wide belt of rainforest circled the earth, covering much of Latin America, south-east Asia and Africa. Today, it is being rapidly replaced by great swathes of palm oil trees and rubber plantations, land cleared for cattle grazing, soya farming, expanding cities, dams and logging. People have been deforesting the tropics for thousands of years for timber and farming, but now, nothing less than the physical transformation of the Earth is taking place. Brazil: Clash of cultures over Amazon dams. Project Profile: Advancing Sustainable Landscapes in the Andean Amazon (ASLAA) The project was designed to counteract several of the major threats to biodiversity and livelihoods in the Andean-Amazon region. 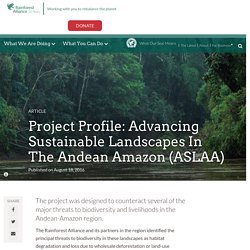 The Rainforest Alliance and its partners in the region identified the principal threats to biodiversity in these landscapes as habitat degradation and loss due to wholesale deforestation or land-use conversion; gold mining is a further threat unique to the Peruvian landscape, affecting the Tambopata Reserve and its surrounding buffer zone. The drivers or root causes of these threats can be grouped into three areas: a) limited institutional capacity by local governments and communities for natural resource management; b) limited participation in and access to programs by local groups for resource management and sustainable production chains; and c) weak organizational capacity and market linkages of local producers and operators to grow local economic opportunities. 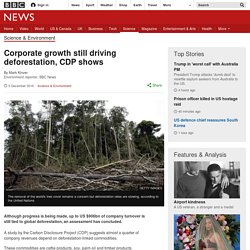 A study by the Carbon Disclosure Project (CDP) suggests almost a quarter of company revenues depend on deforestation-linked commodities. These commodities are cattle products, soy, palm oil and timber products. The findings are based on disclosure requests to 365 investors worth US $22 trillion (£17 trillion). "We found this year that a substantial share of corporate income depends upon commodities that are linked to deforestation risk," explained Katie McCoy, CDP's head of forests.

"When we carried out our analysis, we found that - on average - about a quarter of companies' revenue are dependent on commodities that have been linked to deforestation. " The Lungs of the Earth. Basuki’s men are resting for a moment in the shade of a wooden shed. 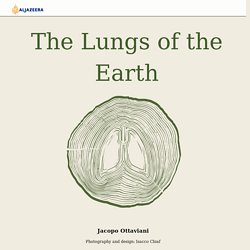 There are some hammocks, a gas burner for making coffee and an open air shower. A few metres away, pots are lined up. Rare Photos of Brazilian Tribe Spur Pleas to Protect It. Forests: Stabilizing Climate and Supporting Development. With the Paris Agreement entering into force last week, negotiators at this year’s UN climate meeting (COP22) in Morocco are getting to work on the specific rules and guidance that will translate Paris commitments into action. 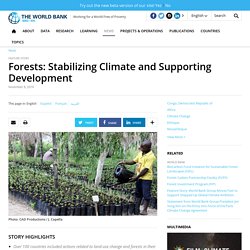 Achieving the Agreement goals will require a strong focus on protecting, restoring, and sustainably managing all types of forests. Deforestation, forest degradation, and land use change account for around 12% of all greenhouse gas emissions on the planet, so it’s clear that forests will play a critical role in helping countries meet their nationally determined contributions to fight climate change. Peru's Rotten Wood. Peru's vast and ancient rainforests are vital to the global response to climate change, home to an astonishing diversity of plants and animals and integral to the way to life of indigenous peoples. 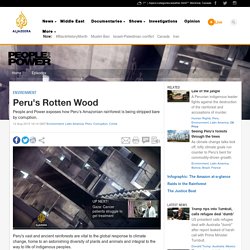 They are supposedly protected by government regulation and international law. Stopping deforestation will not end tropical species losses. Mexican village uses fireflies to halt deforestation by local logging industry. In the village of Nanacamilpa, tiny fireflies are helping save the towering pine and fir trees on the outskirts of the megalopolis of Mexico City. 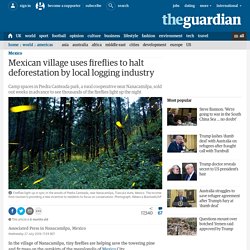 Thousands of them light up a magical spectacle at dusk in the old-growth forests on reserves such as the Piedra Canteada park, about 45 miles (75km) east of Mexico’s sprawling capital city. Piedra Canteada in Tlaxcala state isn’t a government-run park, but a rural cooperative that has managed to emerge from poverty and dependence on logging with the help of the fireflies.

For years, economic forces, including low prices for farm produce, forced rural communities like Piedra Canteada to cut down trees and sell the logs. Then, in 1990, community leader Genaro Rueda Lopez got the idea that the forest could bring tourism revenue from campers. Business was slow for years. “The amount of fireflies you see is impressive,” said Carlos Landa, a Mexico City native who visited Piedra Canteada this week. Chefs See an Olympic Opportunity for Rainforest Preservation. There are thousands of fruits, vegetables, and fish in the Amazon, but most of the world only knows a few dozen of them. 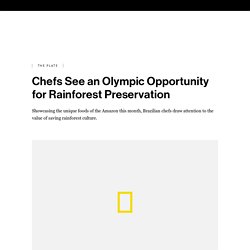 Rainforest to Table is a fledgling movement that aims to change that, enlisting top chefs from Latin America to work with indigenous tribes to learn about and promote foods from the rain forest in a very appealing way: by cooking them—and then giving back to these communities. “This is a new tool in the toolbox when we think about conservation,” says Michael Jenkins of Forest Trends, a nonprofit conservation group, in a promotional video. Forest Trends, along with Canopy Bridge and āmaZ restaurant in Peru, launched the Rainforest to Table movement last November. Tasso Azevedo: Hopeful lessons from the battle to save rainforests. Bolivia: Weaving along the Desaguadero. For geography teacher and adventurer Fearghal O’Nuallain, it took local knowledge and an acceptance of the unknown to make it along Bolivia’s 200-mile river in one piece A gust of wind burnished the surface of the Rio Desaguadero. 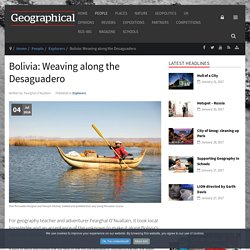 Moments earlier the water had been glass calm. Now hailstones stung my sunburned forearms. Amazon: The final frontier? Last year, American anthropologists Robert Walker and Kim Hill - of the University of Missouri and Arizona State University respectively - took it upon themselves to write an editorial for the weekly journal Science, entitled "Protecting isolated tribes". 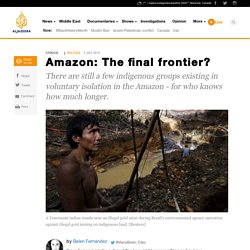 The tribes in question, according to Walker and Hill, are "about 50 isolated indigenous societies across lowland South America … with limited to no contact with the outside world". According to the prominent human rights group Survival International, there are more than 100 so-called "uncontacted" tribes living in voluntary isolation in the world, the vast majority of them in the South American Amazon. Walker and Hill's strategy for "protecting" these groups is one of "controlled contact", in which governments initiate well-organised and sustained contact with the tribes and gradually integrate them into the official domestic fold, where their rights can allegedly be better protected.