‘What should be pristine white is littered with blue’ – Timo Lieber’s Arctic photography. Larsen ice crack continues to open up. Drone footage shows huge Antarctic ice crack. 11 Ways to See How Climate Change Is Imperiling the Arctic. While the average temperature of the planet is slowly creeping up, the Arctic is warming far more quickly—as much as two to three times faster. 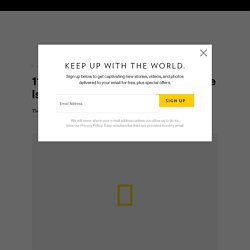 On December 22, a weather buoy near the North Pole reported temperatures at the melting point of 32 degrees Fahrenheit. And recent research suggests that the average summer temperature in the region over the last century is higher than in any other century for at least 44,000 years. Maps and visualizations of the resulting changes in the Arctic make it clear that global warming is no hoax. Scientists are getting a vastly improved picture of what is happening in the Arctic today as sea-ice extent, thickness, and volume are tracked by satellites, ocean buoys, and submarines with upward-looking sonar. Huge Antarctic iceberg poised to break away. Image copyright Adrian Luckman An iceberg expected to be one of the 10 largest ever recorded is ready to break away from Antarctica, scientists say. 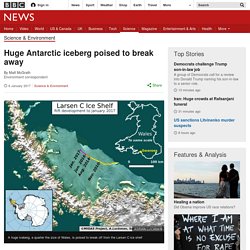 A long-running rift in the Larsen C ice shelf grew suddenly in December and now just 20km of ice is keeping the 5,000 sq km piece from floating away. Ice loss spreads up Antarctic glaciers. Image copyright NASA The scale and pace of change now taking place in West Antarctica is captured in a new, long-term satellite record. 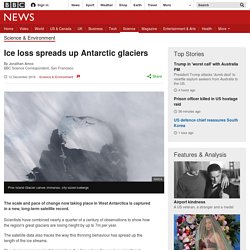 Scientists have combined nearly a quarter of a century of observations to show how the region's great glaciers are losing height by up to 7m per year. The satellite data also traces the way this thinning behaviour has spread up the length of the ice streams. The Great Thaw: mapping Arctic sea ice thickness. As Geographical takes a look at the geopolitical state of the Arctic, Benjamin Hennig maps current ice thickness at the top of the world Sea ice can be described as frozen seawater floating on the surface of the polar oceans. 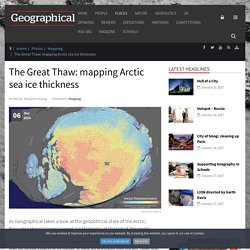 It does not include icebergs or ice shelves, as these are originating from glaciers, rather than sea water. Sea ice becomes thickest and most widespread over the respective winter months in each hemisphere, covering the oceans around the Arctic and Antarctic with millions of square kilometres of ice. A Rare Look at the Disappearing World of Antarctica's Whales. Ari Friedlaender kneels at the front of our inflatable boat as it bobs on the ocean. 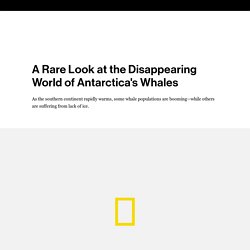 He holds a rifle, with two metal harpoons protruding from its muzzle. His gaze is fixed a few feet ahead, where something big stirs just beneath the surface. Why Antarctica Is So Hard on the Body—Even for Buzz Aldrin. Buzz Aldrin, one of the first men to walk on the moon, was safely evacuated from the South Pole, the U.S. 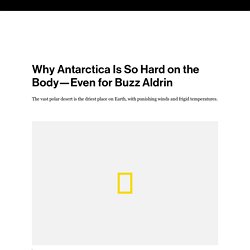 National Science Foundation said December 1. The agency, which runs the U.S. Amundsen-Scott South Pole research station, transported the ailing 86-year-old Apollo 11 astronaut on a military flight to McMurdo Station on the coast and then on to New Zealand. Ice sheets & Climate. Over recent years, a large amount of attention has been paid to ice sheets in the Arctic and Antarctic, by both scientists and the media. 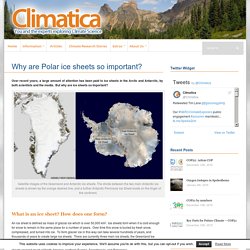 But why are ice sheets so important? Satellite images of the Greenland and Antarctic ice sheets. The divide between the two main Antarctic ice sheets is shown by the orange dashed line, and a further Antarctic Peninsula Ice Sheet exists on the finger of the continent. What is an ice sheet? Alaska's Inupiat elders create a video game to keep culture alive among their youth - Nov. 4, 2016.

Their stories, rooted in folklore and mythology, include tales of overcoming obstacles faced by the community, located in the northern most region of Alaska. 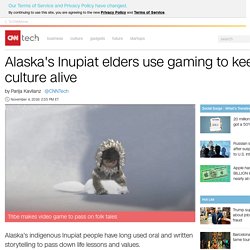 Winter is brutal and sunlight disappears from mid-November until the end of January. But as much as storytelling is integral to Inupiat culture, it risks becoming a dying art form. Watch Arctic sea ice disappear. World's largest marine protected area declared in Antarctica. Image copyright John B. 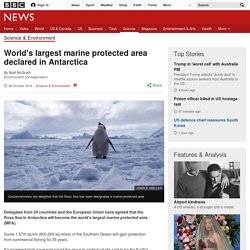 Weller Delegates from 24 countries and the European Union have agreed that the Ross Sea in Antarctica will become the world's largest marine protected area (MPA). Some 1.57m sq km (600,000 sq miles) of the Southern Ocean will gain protection from commercial fishing for 35 years. These Maps Show the Epic Quest for a Northwest Passage. It had to be there: an ocean at the top of the world. 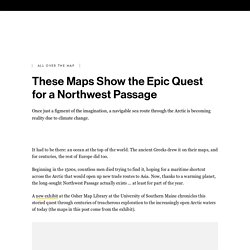 The ancient Greeks drew it on their maps, and for centuries, the rest of Europe did too. Beginning in the 1500s, countless men died trying to find it, hoping for a maritime shortcut across the Arctic that would open up new trade routes to Asia. Now, thanks to a warming planet, the long-sought Northwest Passage actually exists … at least for part of the year. A new exhibit at the Osher Map Library at the University of Southern Maine chronicles this storied quest through centuries of treacherous exploration to the increasingly open Arctic waters of today (the maps in this post come from the exhibit). The idea of a northern ocean passage dates back at least to the second century A.D. Future of Antarctic marine protected areas at risk. Antarctica's surrounding waters are home to some of the healthiest marine ecosystems on Earth and support thriving populations of krill, seabirds, fish and whales. But efforts to establish a network of effective Marine Protected Areas (MPAs) in the Southern Ocean are being hobbled by political infighting and demands that prioritize fishing interests over conservation by members of the international consortium tasked with conserving the region, Stanford scientists say.

The findings, published Oct. 14 in Science, come as 24 countries and the European Union convene in Hobart, Australia, next week for the annual meeting of the Commission for the Conservation of Antarctic Marine Living Resources (CCAMLR), to resume negotiations of Southern Ocean MPAs. "Our research shows that CCAMLR's positions for and against MPAs have become entrenched," said lead author Cassandra Brooks, a PhD candidate at Stanford School of Earth, Energy & Environmental Sciences.

Arctic crossing planned for ‘Boaty’ sub. The UK’s favourite new yellow submarine, Boaty McBoatface, is in training for a grand challenge. Scientists plan to send the long-range autonomous vehicle under the sea-ice of the Arctic - from one side of the ocean basin to the other. It is a journey of at least 2,500km - and while nuclear subs might routinely do it, the prospect is a daunting one for a battery-operated research vehicle. The trip could happen in 2018 or 2019. “It represents one of the last great transects on Earth for an autonomous sub,” said Prof Russell Wynn, from the National Oceanography Centre, Boaty's UK base.

When Survival Depends on What's in Your Backpack. If you’re Lonnie Dupre, it’s about 60 pounds of survival essentials. “Trying to carry 19 days of supplies isn’t easy—it requires a hard look at everything you’re carrying,’’ says Dupre, the legendary Arctic explorer and mountaineer who in 2015 became the first climber to complete a January solo summit of Alaska’s Mount Denali. The Rolex Laureate left his Minnesota home last weekend for a five-week expedition to the Himalaya, where he’ll be part of Vertical Nepal, a six-person climbing team attempting the first ever ascent of 20,885-foot Langju in the remote Tsum Valley. When he returns in mid-November, he’ll prepare for a first ever winter assault of Alaska’s Mount Hunter. Following Protocol: celebrating the Environmental Protocol. This week marks the 25th anniversary of the Environmental Protocol to the Antarctic Treaty The Antarctic Treaty, signed by the United Kingdom and 11 other countries in 1959, declared that ‘in the interest of all mankind, Antarctica shall continue for ever to be used exclusively for peaceful purposes and shall not become the scene or object of international discord.’

However, three decades later, a debate began brewing over the opportunities available for mining and other such extractive activities on the continent. Instead, in the spirit of the Antarctic Treaty, the Protocol on Environmental Protection to the Antarctic Treaty was signed on 4 October 1991 by 31 countries, which designated Antarctica as ‘a natural reserve, devoted to peace and science’. “The big issue is how long countries are going to be politically inclined to protect Antarctica” This is who's responsible for the Arctic. In August 2016 the 13-deck, 1,000-passenger Crystal Serenity set sail from Alaska to become the first cruise liner to attempt the Arctic’s fabled “north-west passage” that runs across the top of North America from the Pacific to the Atlantic.

Until recently the passage was too clogged with ice for all but the sturdiest of ships. This voyage, only possible thanks to climate change, highlights just one impact of melting Arctic sea ice. As the ice melts further new opportunities will arise to fish, to drill for oil and gas, or to sail through the once-frozen ocean. Inevitably, this activity will create competition with traditional Arctic communities, and risks severe damage to the environment. Drones on ice. ANTARCTIC BLOG: Typical week at Bird Island Station - Blog post - British Antarctic Survey.