Endangered glaciers: Alpine ice begins Antarctic voyage. More than 400 pieces of Alpine ice have been moved to a giant freezer - a first step in their journey to Antarctica. 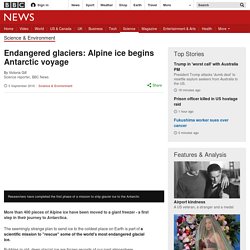 The seemingly strange plan to send ice to the coldest place on Earth is part of a scientific mission to "rescue" some of the world's most endangered glacial ice. Bubbles in old, deep glacial ice are frozen records of our past atmosphere. Scientists say their purpose-built Antarctic ice bunker will keep these safe for future research. Image copyright Victoria Gill. Major Landforms of Louisiana. Gulf Coast of the United States - Wikipedia. Night time astronaut image of the northern Gulf coast. 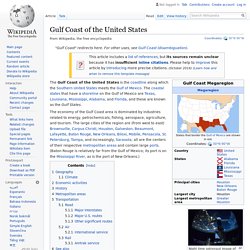 The Gulf Coast of the United States is the coastline along which the Southern United States meets the Gulf of Mexico. The coastal states that have a shoreline on the Gulf of Mexico are Texas, Louisiana, Mississippi, Alabama, and Florida, and these are known as the Gulf States. The economy of the Gulf Coast area is dominated by industries related to energy, petrochemicals, fishing, aerospace, agriculture, and tourism. Impacts of sea level rise on sedimentation in tidal salt marsh settings of the Coastal Plain, U.S.A. Rachel Hatch April 27, ppt download. New Orleans District > Missions > Environmental > Louisiana Coastal Area > Critical Near-Term Projects. Coastal. USGS Gulf of Mexico Science Coordination - Barrier Island Comprehensive Monitoring (BICM) The form of Louisiana’s coast is a function of the dynamic balance between the Mississippi River and the Gulf of Mexico. 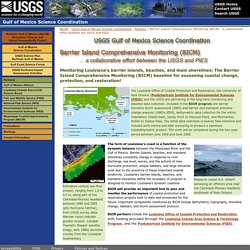 Barrier Islands, beaches, and mainland shorelines constantly change in response to river discharge, sea level, waves, and the actions of man. Hurricane protection, unique habitats, and large estuaries exist due to the presence of these important coastal landforms. Louisiana's barrier islands, beaches, and mainland shorelines define the boundary of program is designed to monitor Louisiana's dynamic coastline. BICM will provide an important tool to plan and monitor the performance of coastal protection and resotration projects built to date and envisioned for the future. Important components monitored by BICM include bathymetry, topography, shoreline change, habitats, and storm assessment protocol. Cosmic clue to UK coastal erosion. Image copyright Martin Hurst et al Recent centuries have seen a big jump in the rates of erosion in the iconic chalk cliffs on England's south coast. 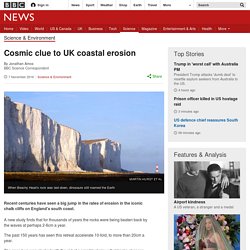 A new study finds that for thousands of years the rocks were being beaten back by the waves at perhaps 2-6cm a year. The past 150 years has seen this retreat accelerate 10-fold, to more than 20cm a year. The speed-up was clocked with the aid of a smart technique that tracks changes induced in rocks when they are exposed to energetic space particles. 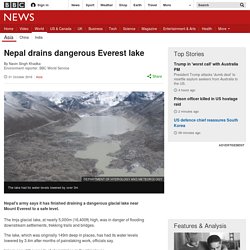 The Imja glacial lake, at nearly 5,000m (16,400ft) high, was in danger of flooding downstream settlements, trekking trails and bridges. Coast Lines. Coasts are a more complex geographical entity than you might believe. 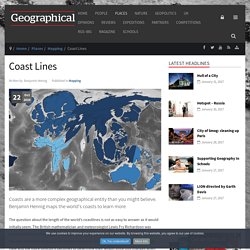 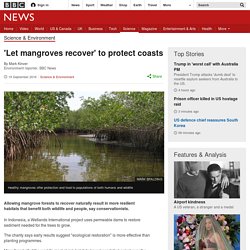 Beaches on Dorset's famous Jurassic Coast could be shut if tourists do not start to exercise ‘common sense’ and listen to safety warnings when visiting the Unesco World Heritage Site. 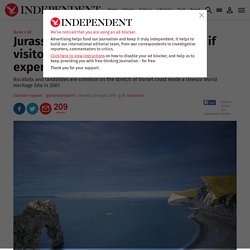 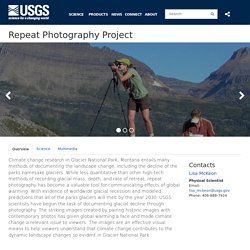 We began searching for historic photographs of glaciers in the vast collection that spans over a century. Many high quality photographs exist from the parks early photographers such as Morton Elrod, T.J. Hileman, Ted Marble, F.E. Matthes, and others who scoured the park to publicize its beauty and earn their livings. Map showing glaciers re-photographed by USGS since 1997. What’s happening to Europe’s longest glacier? The mighty Aletsch Glacier is melting at an ever-quickening pace and could almost disappear by the end of this century. 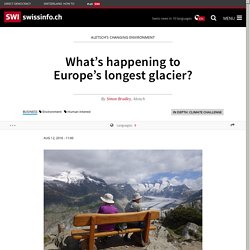 The shrinking field of ice is just one of a series of dramatic changes to the local region’s landscape and fauna. From the top of the Moosfluh peak above the village of Riederalp, the sweeping panoramic vista takes your breath away. A huge grey-and-white cracked sea of ice snakes into view from around a distant mountain. Just below, an elderly Japanese couple munch away on their packed lunch, silently digesting the natural wonder from their balcony seat.

“I’ve been here three times in the past 17 years and each time it looks a bit different,” says the man. Stretching over 23 kilometres, the Aletsch Glacier in canton Valais is the longest in Europe, measuring 1.5 kilometres wide on average and 900 metres at its thickest point. Glacial investigation Task. ESRI - Holderness Coastal Erosion Investigation. Coastal landforms investigation. Dwindling water from glaciers, and the hope in technology. UK Coastal flooding/erosion investigation tool.