Floods lash Bolivia and Peru. The past few days have seen flooding across parts of South America. 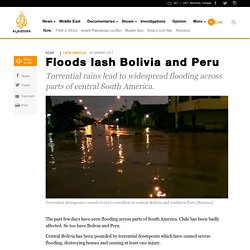 Chile has been badly affected. So too have Bolivia and Peru. Central Bolivia has been pounded by torrential downpours which have caused severe flooding, destroying homes and causing at least one injury. La Paz had 24mm of rain on Wednesday, and 37mm in the past two days. This makes up more than a quarter of the January average which is 137mm. Rush to build new homes will increase flooding, experts warn. The rush to build one million new homes in England by 2020 is set to increase flooding by overwhelming drains, according to the nation’s building and flooding professionals. 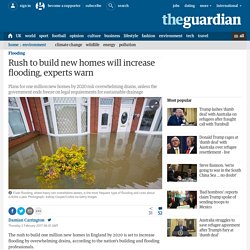 The risk could be avoided, however, if the government ends its seven-year freeze on implementing legal requirements for new developments to include sustainable drainage systems (SuDS), such as ponds, green roofs and permeable paving. These slow the flow of water into drains, cutting the risk of floods. Flood prevention being ignored - MPs. Image copyright Getty Images Simple actions to help protect homes in England from flooding are still being ignored by government, MPs say. 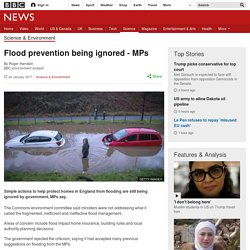 The Commons environment committee said ministers were not addressing what it called the fragmented, inefficient and ineffective flood management. Areas of concern include flood impact home insurance, building rules and local authority planning decisions. The government rejected the criticism, saying it had accepted many previous suggestions on flooding from the MPs. The committee’s comments are the latest in a running tussle between MPs and the environment department Defra. Flash floods kill 18 in southern Thailand. Flash floods have killed at least 18 people in Thailand as heavy rains continued to ravage the country's south. 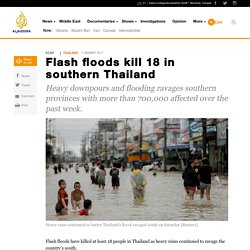 The flooding, which is roof-high in some areas, affected more than 700,000 people since it started a week ago, Thailand's interior ministry said in a statement on Saturday. At least 18 people have died and one is missing, it added, with the rains turning roads into rivers, inundating farmland, and damaging more than 1,500 schools in the region. Flood spending decisions 'perverse', Green Alliance says. Image copyright Getty Images England spends nearly four times more on activities that may cause flooding than it invests to combat flooding, the Green Alliance think tank has said. 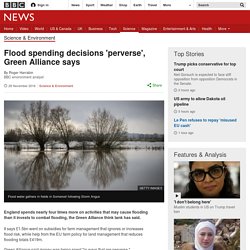 It says £1.5bn went on subsidies for farm management that ignores or increases flood risk, while help from the EU farm policy for land management that reduces flooding totals £419m. Green Alliance said money was being spent "in ways that are perverse. " The government said natural flood management plays "an important role". Thailand's south hit by deadly floods. Heavy rain continues to cause flooding across southern Thailand after at least eight people lost their lives. 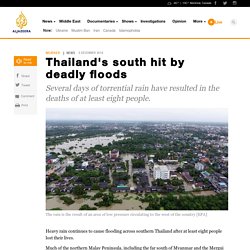 Much of the northern Malay Peninsula, including the far south of Myanmar and the Mergui Archipelago, has been hit by continuous rain, which began early on Friday. Some areas have recorded up to half a metre of rain (500mm). This compares to an average rainfall for the entire month of December of 150 to 200mm. Last winter's flooding 'most extreme on record' in UK. Image copyright Getty Images Flooding across parts of the UK last winter was the most extreme on record, experts have said. 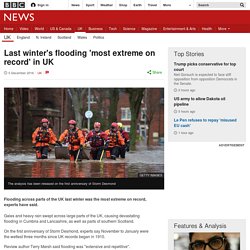 Gales and heavy rain swept across large parts of the UK, causing devastating flooding in Cumbria and Lancashire, as well as parts of southern Scotland. On the first anniversary of Storm Desmond, experts say November to January were the wettest three months since UK records began in 1910. Review author Terry Marsh said flooding was "extensive and repetitive". Storm Desmond began battering parts of the UK on 5 December, depositing a record month's worth of rain on Cumbria in just one day. The aftermath of Turin floods. Outcry over lack of cash for flood defences as storm hits south UK.

The government has been accused of being “all talk and no action” on flood defences, as the first named storm of the season brought flooding and power cuts to the south of England. 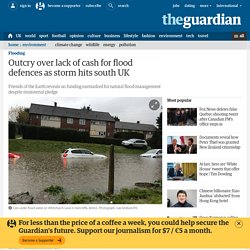 Storm Angus saw gusts of up to 106mph recorded 23 miles off the coast of Margate, while gusts of 80mph hit Langdon Bay, also in Kent. While Met Office weather warnings connected with Storm Angus expired at 1pm on Sunday as the storm moved out to the North Sea, a new series of warnings were issued for Monday and Tuesday for heavy rain in south-west England, parts of northern England and Wales. Andy Page, chief meteorologist at the Met Office, said Devon was likely to be most affected. “Although the more persistent rain should clear from Devon by early afternoon, heavy and possibly thundery showers are likely to follow,” he said. Storms bring flooding to Mexico - News from Al Jazeera. A trough of low pressure lying north-south through Mexico, and a cold weather front moving southwards across the United States, coincided to bring the severe weather conditions. 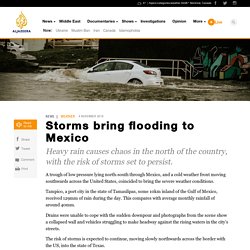 Tampico, a port city in the state of Tamaulipas, some 10km inland of the Gulf of Mexico, received 129mm of rain during the day. This compares with average monthly rainfall of around 40mm. Drains were unable to cope with the sudden downpour and photographs from the scene show a collapsed wall and vehicles struggling to make headway against the rising waters in the city’s streets. The risk of storms is expected to continue, moving slowly northwards across the border with the US, into the state of Texas. 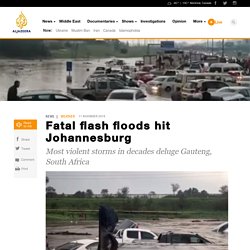 At least six people are reported as dead in Gauteng, and more may be still missing. Heavy rains caused national roads and the OR Tambo International Airport to flood on Wednesday afternoon. On approach roads and, indeed, other roads, many cars were washed away while drivers looked on helplessly. SurgeWatch. See at a glance how rewilding reduces flooding risk with our new infographic □□□ Post-heatwave storm brings flash floods causing widespread disruption. Flash flooding has caused travel chaos in parts of England as thunderstorms dumped almost half a month's rain in some parts within hours. A train from Milton Keynes to Euston derailed in a landslip near Watford Junction, injuring two people. The worst-hit areas are across the east, south and south-east of England, with disruption due to continue into the weekend. Roads, homes and a hospital are flooded and lightning has damaged buildings.

Train derailed by landslide In pictures: Flash flooding. North Korea floods: Tens of thousands displaced. Image copyright AFP Aid agencies have warned that North Korea is facing a humanitarian disaster after tens of thousands of people were displaced by flooding. The UN and the International Red Cross say the government has reported 133 deaths with nearly 400 people missing and homes and crops destroyed. More than 130 people dead in North Korea floods - News from Al Jazeera. Torrential rain has caused severe flooding in the northeast of North Korea. According to the UN, 133 people have died and another 395 are currently missing. The UN Office for the Coordination of Humanitarian Affairs (OCHA) quoted Pyongyang government figures, saying that around 107,000 residents had been forced from their homes in the area along the Tumen River. OCHA added that more than 35,500 homes had been destroyed along with 8,700 public buildings. The past few weeks have seen bands of heavy rain sweeping across North Korea.

Hundreds of key sites in England at risk of floods. Image copyright Owen Humphreys As many as 530 key infrastructure sites across England are still vulnerable to flooding, according to a government review. The report commits a total of £12.5m to new temporary flood defences in England. The review was commissioned after 16,000 houses across northern England were flooded during the wettest December in a century last year.

Louisiana struggles a month after devastating US floods - News from Al Jazeera. Baton Rouge, United States - Beyond an immense mound of destroyed belongings and rotting wood sitting in the yard across from her home, Mary Mercado puts out food and water for her neighbour's cat. It has been a month since this part of Louisiana was submerged by floods, and Mercado has been coming back daily to feed pets and check on her home. Like most other houses on the block and throughout the Sherwood neighbourhood, hers was so badly damaged that it is still uninhabitable. Flooding: the problem that will not go away. The route of the Oxford Flood Alleviation Scheme.

Focus on flood rescue and relief efforts in Wuhan, China.