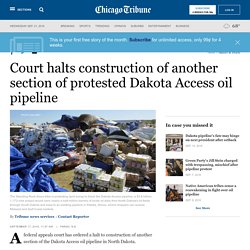 A three-judge panel of the U.S. Court of Appeals for the District of Columbia Circuit said in a ruling late Friday that it needs more time to consider the Standing Rock Sioux Tribe's request for an emergency injunction. It said it will issue another order setting a date for oral arguments on the motion. The order "should not be construed in any way as a ruling on the merits of that motion," the panel said.

The ruling stops construction within 20 miles on either side of Lake Oahe. Vicki Granado, spokeswoman for Dakota Access LLC, said the company does not comment on pending litigation. "Judge Boasberg, in his thoughtful and thorough opinion last week, confirmed that the Army Corps of Engineers did their jobs expertly and in accordance with the law," Stevens said in a statement. Republican Rep. Associated Press. Understanding the Controversy Behind the Dakota Access Pipeline. The controversial Dakota Access Pipeline continues to make headlines. 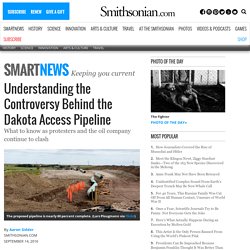 Yesterday, Energy Transfer Partners, the developer behind the $3.8 billion proposed project issued a memo to employees that the pipeline is nearly 60 percent complete, but did not respond to the Obama administration’s recent request for the company to voluntarily halt construction on the project on federal land. The memo did, however, say that the company's CEO plans to meet with federal officials and stated that the project would go forward. Obama’s statement came after the U.S. District Judge James E. Boasberg ruled on Friday that the Army Corps “likely complied” with its obligation to consult the Standing Rock Sioux. The Standing Rock Sioux opposes the pipeline's construction near the Sioux reservation on the grounds that it threatens their public health and welfare, water supply and cultural resources.

As reported by NPR, the agencies stated: A Pipeline Fight and America’s Dark Past. This week, thousands of Native Americans, from more than a hundred tribes, have camped out on the Standing Rock Sioux reservation, which straddles the border between the Dakotas, along the Missouri River. 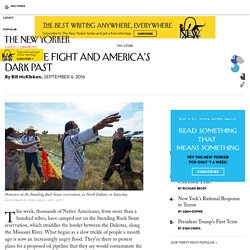 What began as a slow trickle of people a month ago is now an increasingly angry flood. They’re there to protest plans for a proposed oil pipeline that they say would contaminate the reservation’s water; in fact, they’re calling themselves protectors, not protesters. Their foe, most directly, is the federal government, in particular the U.S. Army Corps of Engineers, which has approved a path for the pipeline across the Missouri under a “fast track” option called Permit 12. That’s one reason the Dakota Access Pipeline, as it’s known, hasn’t received the attention that, say, the Keystone XL Pipeline did, even though the pipe is about the same length.

Pictures from that confrontation recall pictures from Birmingham circa 1963. The protests have been peaceful and nonviolent. Wikileaks - Can We Trust The Media? Julian Assange (26th July 2013)

Environment. Labour. Foreign Policy. Cybersecurity bill could 'sweep away' internet users' privacy, agency warns. The Department of Homeland Security (DHS) on Monday said a controversial new surveillance bill could sweep away “important privacy protections”, a move that bodes ill for the measure’s return to the floor of the Senate this week. 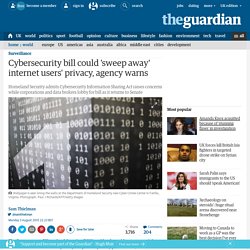 The latest in a series of failed attempts to reform cybersecurity, the Cybersecurity Information Sharing Act (Cisa) grants broad latitude to tech companies, data brokers and anyone with a web-based data collection to mine user information and then share it with “appropriate Federal entities”, which themselves then have permission to share it throughout the government. Minnesota senator Al Franken queried the DHS in July; deputy secretary of the department Alejandro Mayorkas responded today that some provisions of the bill “could sweep away important privacy protections” and that the proposed legislation “raises privacy and civil liberties concerns”. Obama's Endorsement Of Debbie Wasserman Schultz Brings In Serious Money... For Her Challenger.