Research reveals a new secret to the miracle of breast milk. One of the secrets to rich milk production in lactation has been uncovered by researchers at the Walter and Eliza Hall Institute. 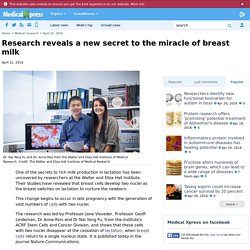 Their studies have revealed that breast cells develop two nuclei as the breast switches on lactation to nurture the newborn. This change begins to occur in late pregnancy with the generation of vast numbers of cells with two nuclei. The research was led by Professor Jane Visvader, Professor Geoff Lindeman, Dr Anne Rios and Dr Nai Yang Fu, from the institute's ACRF Stem Cells and Cancer Division, and shows that these cells with two nuclei disappear at the cessation of lactation, when breast cells return to a single nucleus state.

It is published today in the journal Nature Communications. Using unique 3-D imaging technology Dr Rios and Dr Fu found huge numbers of cells became binucleated - developed a second nucleus - a process that is critical to milk production. "We know that these cells are milk-producing factories," Professor Visvader said. The Evolution Of The Y Chromosome. In modern day mammals sex is determined by the Y chromosome. 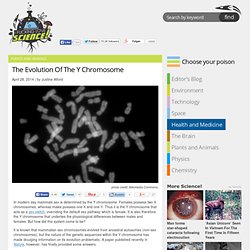 The team were also able to trace the evolution of the different sex determining genes for therians and monotremes which are called SRY and AMHY, respectively. Kaessmann_march2014eng. Gray wolf. The gray wolf or grey wolf (Canis lupus) is a canid native to the wilderness and remote areas of North America, Eurasia, and North Africa. 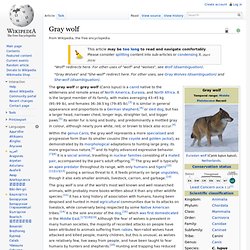 It is the largest member of its family, with males averaging 43–45 kg (95–99 lb), and females 36–38.5 kg (79–85 lb).[3] It is similar in general appearance and proportions to a German shepherd,[4] or sled dog, but has a larger head, narrower chest, longer legs, straighter tail, and bigger paws.[5] Its winter fur is long and bushy, and predominantly a mottled gray in colour, although nearly pure white, red, or brown to black also occur.[4] Etymology The English word "wolf" stems from the Old English wulf, which is itself thought to be derived from the Proto-Germanic *wulfaz, from the Proto-Indo-European root *wlqwos/*lukwos.[21] Old English literature contains several instances of Anglo-Saxon kings and warriors taking on wulf as a prefix or suffix in their names. 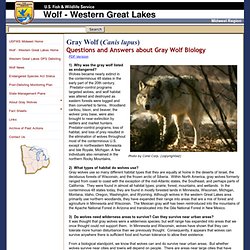 Wolves became nearly extinct in the conterminous 48 states in the early part of the 20th century. Predator-control programs targeted wolves, and wolf habitat was altered and destroyed as eastern forests were logged and then converted to farms. Woodland caribou, bison, and beaver, the wolves’ prey base, were also brought to near-extinction by settlers and market hunters. Predator-control programs, loss of habitat, and loss of prey resulted in the elimination of wolves throughout most of the conterminous U.S. except in northeastern Minnesota and Isle Royale, Michigan. 2) What types of habitat do wolves use? Gray wolves use so many different habitat types that they are equally at home in the deserts of Israel, the deciduous forests of Wisconsin, and the frozen arctic of Siberia. 3) Do wolves need wilderness areas to survive? From a biological standpoint, we know that wolves can and do survive near urban areas. 5) What do wolves eat? 25 Most Adorable Baby Animals From OneBigPhoto.