Five Ways Nanotechnology Is Securing Your Future. The past 70 years have seen the way we live and work transformed by two tiny inventions. 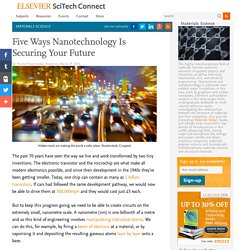 The electronic transistor and the microchip are what make all modern electronics possible, and since their development in the 1940s they’ve been getting smaller. Today, one chip can contain as many as 5 billion transistors. If cars had followed the same development pathway, we would now be able to drive them at 300,000mph and they would cost just £3 each. But to keep this progress going we need to be able to create circuits on the extremely small, nanometre scale. A nanometre (nm) is one billionth of a metre and so this kind of engineering involves manipulating individual atoms. The real challenge is using such techniques reliably to manufacture working nanoscale devices. 1.

Wearable fitness technology means we can monitor our health by strapping gadgets to ourselves. 2.

Holometer rules out first theory of space-time correlations. Our common sense and the laws of physics assume that space and time are continuous. 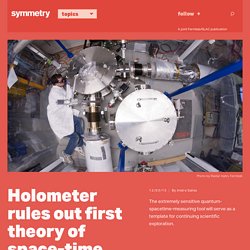 The Holometer, an experiment based at the US Department of Energy’s Fermi National Accelerator Laboratory, challenges this assumption. We know that energy on the atomic level, for instance, is not continuous and comes in small, indivisible amounts. The Holometer was built to test if space and time behave the same way. In a new result released this week after a year of data-taking, the Holometer collaboration has announced that it has ruled out one theory of a pixelated universe to a high level of statistical significance. If space and time were not continuous, everything would be pixelated, like a digital image. When you zoom in far enough, you see that a digital image is not smooth, but made up of individual pixels. But as Hogan emphasizes, it's just one theory, and with the Holometer, this team of scientists has proven that space-time can be probed at an unprecedented level.

So what’s next? Video: Ants Act Like Both Liquids and Solids. Kind of like the T-1000 from "Terminator 2. 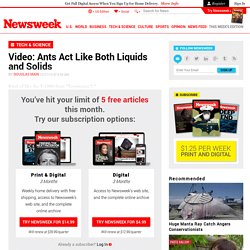 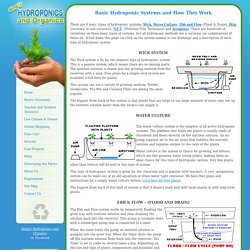 (Nutrient Film Technique) and Aeroponic. There are hundreds of variations on these basic types of systems, but all hydroponic methods are a variation (or combination) of these six. Scroll down this page (or click on the system names) to see drawings and a description of each type of hydroponic system. The Wick system is by far the simplest type of hydroponic system. This is a passive system, which means there are no moving parts. This system can use a variety of growing medium. The biggest draw back of this system is that plants that are large or use large amounts of water may use up the nutrient solution faster than the wick(s) can supply it.

The water culture system is the simplest of all active hydroponic systems. Englund group members develop ultrasensitive magnetic-field detector. Members of the Quantum Photonics Lab including its director Professor Dirk Englund and EECS graduate student Hannah Clevenson have developed a new, ultrasensitive magnetic-field detector that is 1,000 times more energy-efficient than its predecessors. 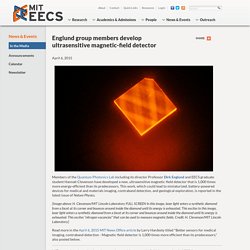 This work, which could lead to miniaturized, battery-powered devices for medical and materials imaging, contraband detection, and geological exploration, is reported in the latest issue of Nature Physics. [Image above: H. Clevenson/MIT Lincoln Laboratory FULL SCREEN In this image, laser light enters a synthetic diamond from a facet at its corner and bounces around inside the diamond until its energy is exhausted. Cheaper, More Compact Particle Accelerators Are A Step Closer. Scientists working on an experiment at the SLAC National Accelerator Laboratory in the US have taken a step forward in developing a technology which could significantly reduce the size of particle accelerators. 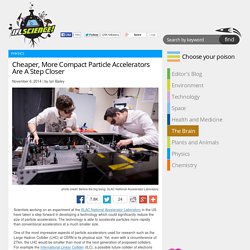 The technology is able to accelerate particles more rapidly than conventional accelerators at a much smaller size. One of the most impressive aspects of particle accelerators used for research such as the Large Hadron Collider (LHC) at CERN is its physical size. Yet, even with a circumference of 27km, the LHC would be smaller than most of the next generation of proposed colliders. For example the International Linear Collider (ILC), a possible future collider of electrons and positrons (anti-electrons) could be 31km long, and there is even a proposal for a circular accelerator with an 80km circumference that could be built at CERN as part of the Future Circular Colliders (FCC) project.

This matters because particle accelerators are not just for particle physicists.