Memories Retrieved in Mutant "Alzheimer's" Mice. People with Alzheimer's disease may forget faces or where they left familiar objects because their brains cannot find where they put those memories, a study in mice suggests. 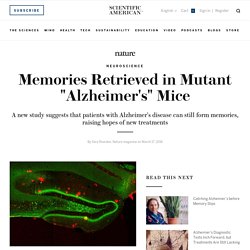 The study, reported in Nature, contradicts the notion that Alzheimer’s prevents the brain from making new memories. It also suggests that brain stimulation might temporarily improve the memories of patients in the early stages of the disease. The research builds on earlier work by lead author Susumu Tonegawa, a neuroscientist, and his colleagues at Massachusetts Institute of Technology in Cambridge. Last year, they showed that in certain types of amnesia, memories were stored but could not be retrieved. It is difficult to detect the difference between a stored and a retrieved memory in humans, as the only way to test memory is to ask patients to recall information.

These mice develop amyloid protein clusters, or plaques, in their brains and eventually lose their memories—just as humans with Alzheimer's disease do. New Gene Found That Could be the Culprit for Alzheimer's, But Could Also Stop the Disease - The Latest News. Scientists have long tried to tackle Alzheimer’s disease (AD), but there are still no working therapies that would stop, let alone reverse the condition and the researchers are working hard on identifying the genes that cause the start and progression of this disease. 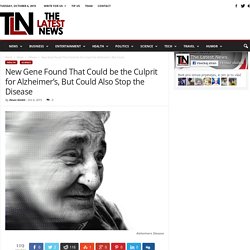 Until recently the biggest culprit was thought to be APOE e4 allele, which has already been identified as a cause for the development of this disease. 10/01/14 22:59. Memory Loss Associated with Alzheimer’s Reversed for First Time. Small trial from UCLA and Buck Institute succeeds using systems approach to memory disorders. 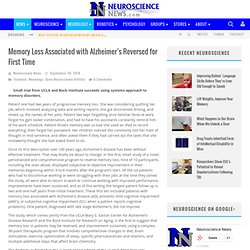 Patient one had two years of progressive memory loss. She was considering quitting her job, which involved analyzing data and writing reports, she got disoriented driving, and mixed up the names of her pets. Patient two kept forgetting once familiar faces at work, forgot his gym locker combination, and had to have his assistants constantly remind him of his work schedule. Patient three’s memory was so bad she used an iPad to record everything, then forgot her password. Her children noticed she commonly lost her train of thought in mid-sentence, and often asked them if they had carried out the tasks that she mistakenly thought she had asked them to do. Since its first description over 100 years ago, Alzheimer’s disease has been without effective treatment.

The study, which comes jointly from the UCLA Mary S. The downside to this program is its complexity. Share this Neurology News. Schizophrenia not a single disease but multiple genetically distinct disorders. New research shows that schizophrenia isn’t a single disease but a group of eight genetically distinct disorders, each with its own set of symptoms. 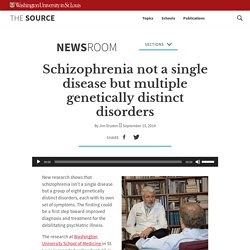 The finding could be a first step toward improved diagnosis and treatment for the debilitating psychiatric illness. The research at Washington University School of Medicine in St. Louis is reported online Sept. 15 in The American Journal of Psychiatry. About 80 percent of the risk for schizophrenia is known to be inherited, but scientists have struggled to identify specific genes for the condition. Now, in a novel approach analyzing genetic influences on more than 4,000 people with schizophrenia, the research team has identified distinct gene clusters that contribute to eight different classes of schizophrenia. “Genes don’t operate by themselves,” said C. Robert Boston Igor Zwir, PhD, one of the senior investigators, helped match precise DNA variations in people with and without schizophrenia to symptoms in individual patients.

Brains flush toxic waste in sleep, including Alzheimer’s-linked protein, study of mice finds. Scientists say this nightly self-clean by the brain provides a compelling biological reason for the restorative power of sleep. 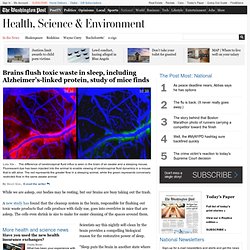 “Sleep puts the brain in another state where we clean out all the byproducts of activity during the daytime,” said study author and University of Rochester neurosurgeon Maiken Nedergaard. Those byproducts include beta-amyloid protein, clumps of which form plaques found in the brains of Alzheimer’s patients. Staying up all night could prevent the brain from getting rid of these toxins as efficiently, and explain why sleep deprivation has such strong and immediate consequences. Too little sleep causes mental fog, crankiness, and increased risks of migraine and seizure.

Rats deprived of all sleep die within weeks. Although as essential and universal to the animal kingdom as air and water, sleep is a riddle that has baffled scientists and philosophers for centuries. Sleep Drives Metabolite Clearance from the Adult Brain. This is a more extensive. Less Sleep Linked To Alzheimer’s Disease. Here’s one more reason to get to bed earlier. 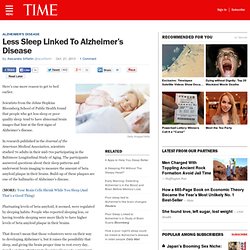 Scientists from the Johns Hopkins Bloomberg School of Public Health found that people who get less sleep or poor quality sleep tend to have abnormal brain images that hint at the first signs of Alzheimer’s disease. In research published in the Journal of the American Medical Association, scientists studied 70 adults in their mid-70s participating in the Baltimore Longitudinal Study of Aging. The participants answered questions about their sleep patterns and underwent brain imaging to measure the amount of beta amyloid plaque in their brains.

Build-up of these plaques are one of the hallmarks of Alzheimer’s disease. (MORE: Your Brain Cells Shrink While You Sleep (And That’s a Good Thing) Fluctuating levels of beta amyloid, it seemed, were regulated by sleeping habits. My interest in curing.