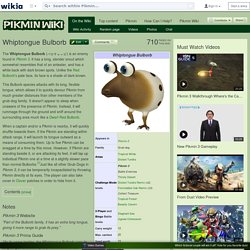 It has a long, slender snout which somewhat resembles that of an anteater, and has a white back with dark brown spots. Unlike the Red Bulborb's pale face, its face is a shade of dark brown. This Bulborb species attacks with its long, flexible tongue, which allows it to quickly devour Pikmin from much greater distances than other members of the grub-dog family. It doesn't appear to sleep when unaware of the presence of Pikmin. Instead, it will rummage through the ground and sniff around the surrounding area much like a Dwarf Red Bulborb. Hairy Bulborb - Pikmin Wiki. Hairy Bulborbs (ケチャッピー) are enemies in Pikmin 2. 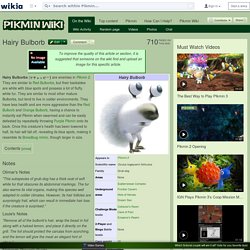 They are similar to Red Bulborbs, but their backsides are white with blue spots and possess a lot of fluffy, white fur. They are similar to most other mature Bulborbs, but tend to live in colder environments. They have less health and are more aggressive than the Red Bulborb and Orange Bulborb, having a chance to instantly eat Pikmin when swarmed and can be easily defeated by repeatedly throwing Purple Pikmin onto its back. Once this creature's health has been lowered to half, its hair will fall off, revealing its blue spots, making it resemble its Breadbug mimic, though larger in size. Notes Olimar's Notes "This subspecies of grub-dog has a thick coat of soft white fur that obscures its abdominal markings.

Louie's Notes "Remove all of the bulborb's hair, wrap the beast in foil along with a halved lemon, and place it directly on the grill. Nintendo Player's Guide Gallery Louie and some Pikmin next to a Hairy Bulborb. Add a photo to this gallery. Orange Bulborb - Pikmin Wiki. The Orange Bulborb (テンテンチャッピー) is an enemy found in Pikmin 2 and Pikmin 3. 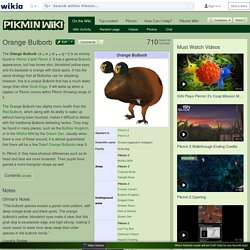 It has a general Bulborb appearance, but has brown skin, bloodshot yellow eyes, and it's backside is orange with black spots. It has the same strategy that all Bulborbs use for attacking; however, this is a unique Bulborb that has a much wider range than other Grub-Dogs, It will wake up when a captain or Pikmin comes within Pikmin throwing range of it. The Orange Bulborb has slighty more health than the Red Bulborb, which along with its ability to wake up without having been touched, makes it difficult to defeat with the traditional Bulborb-defeating tactics. They may be found in many places, such as the Bulblax Kingdom, or in the Wistful Wild by the Dream Den. Usually when there is one of these around, it is almost guaranteed that there will be a few Dwarf Orange Bulborbs near it. Bulborb - Pikmin Wiki. Scientific name: Oculus kageyamii The Bulborbs are generally the same physically, usually having minor differences such as color, size, and awakening range. 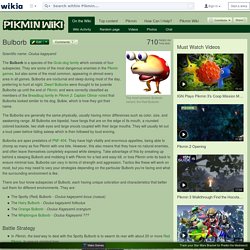 All Bulborbs are bipedal, have fangs that are on the edge of its mouth, a rounded colored backside, two stalk eyes and large snouts coupled with their large mouths. They will usually let out a loud yawn before falling asleep which is then followed by loud snoring. Bulborbs are apex predators of PNF-404. They have high vitality and enormous appetites, being able to chomp as many as five Pikmin with one bite. There are four know subspecies of Bulborb, each having unique coloration and characteristics that better suit them for different environments. The Spotty (Red) Bulborb - Oculus kageyamii locus (russus)The Hairy Bulborb - Oculus kageyamii folliculusThe Orange Bulborb - Oculus Kageyamii orangium The Whiptongue Bulborb - Oculus Kageyamii ??? Battle Strategy Trivia Bulborbs are the most common enemy found in the Pikmin series. See also: Red Bulborb - Pikmin Wiki.

Biology Red Bulborbs are among the most mammalian enemies in the series due to them having leathery, soft skin and bulbous eyes, opposed to the compound eyes of most insects. 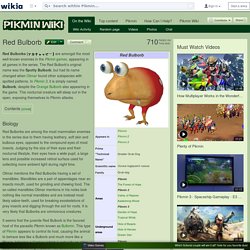 Judging by the size of their eyes and their nocturnal lifestyle, their eyes have a wide pupil, a large lens and possible increased retinal surface used for collecting more ambient light during night time. Olimar mentions the Red Bulborbs having a set of mandibles. Mandibles are a pair of appendages near an insects mouth, used for grinding and chewing food. The so-called mandibles Olimar mentions in his notes look nothing like normal mandibles and are instead most likely sabre-teeth, used for breaking exoskeletons of prey insects and digging through the soil for roots. Notes Ship's Log "The most plentiful species on the planet, they are quite ferocious despite their appearance, using their massive jaws to swallow Pikmin whole. Reel Notes Olimar's Notes Louie's Notes Nintendo Player's Guide Super Smash Bros. 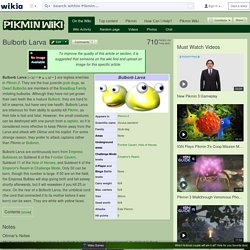 They are the true juvenile grub-dogs, as Dwarf Bulborbs are members of the Breadbug Family imitating bulborbs. Although they have not yet grown their own teeth like a mature Bulborb, they are hard to kill in swarms, but have very low health. Bulborb Larva are infamous for their ability to quickly kill Pikmin, as their bite is fast and fatal. However, the small creatures can be destroyed with one punch from a captain, so it is considered more effective to keep Pikmin away from the Larva and attack with Olimar and his copilot. For some strange reason, they prefer to attack captains rather than Pikmin or Bulbmin. Bulborb Larva are continuously born from Empress Bulblaxes on Sublevel 8 of the Frontier Cavern, Sublevel 11 of the Hole of Heroes, and Sublevel 4 of the Emperor's Realm in Challenge Mode.