Show Chapter. Know you got that thing (that i like) - lightseep - One Direction (Band) Show Chapter. Show Chapter. Ashtarok - Works. Evelynegrey. He finishes another signature and looks up, expecting to see yet another girl with stars in her eyes, but finds himself facing a young man smiling at him serenely from across the table. 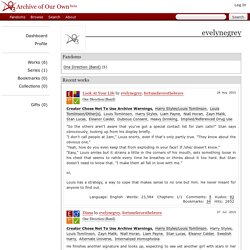 They don't get many boys their own age, and this one certainly seems to have come of his own volition, standing by himself and sporting a well fitting Take Me Home shirt in black and white. “Hi, Louis,” he says breathlessly, shuffling from one foot to the other, and there's something vaguely familiar about him, something pleasant about his presence that makes Louis pause. “Have we met before?” He asks, taking in the boy's clear green eyes, wide mouth and long curly hair falling to his shoulders messily. “Um, no,” he smiles bashfully and shakes his head, “but I saw you in Stockholm last month. 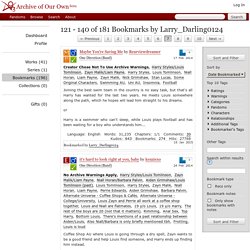 He knew it would alter his life, but not like this. Louis hated Harry, and Harry hated Louis, that’s just the way it was, the way it had always been. Louis outing himself just gave him even more reason to torment the boy. It was inevitable, really, Harry being the school’s football captain and star player, and Louis being the weird kid that was into theatre and had just come out of the closet.One night at a party and getting lost in a forest after a bit too much to drink, Louis finds himself pressed onto the grass by the weight of a body of none other than Harry Styles. Louis discovers things about Harry that no one else knows, he realises that Harry has a secret of his own.

Show Chapter. Everybody has a talent. 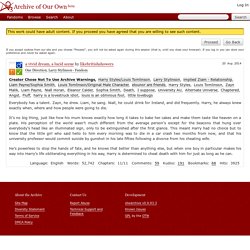 Zayn, he drew. Liam, he sang. Niall, he could drink for Ireland, and did frequently. Harry, he always knew exactly when, where and how people were going to die. It’s no big thing, just like how his mum knows exactly how long it takes to bake her cakes and make them taste like heaven on a plate. Show Chapter. Larry_Klaine_Stylinson - Works. Just the outlines of our hands - justaboat - One Direction (Band) Jacinth - Works. Archive of Our Own. Chimaera Of Judgement - Chapter 2 - JessicaX - Harry Potter - J. K. Rowling [Archive of Our Own] Chapter Text "Dobby? 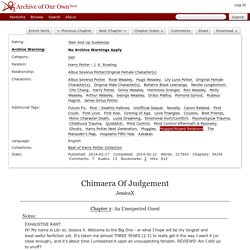 " A pale, thin face poked its way into the drawing room, bright green eyes sweeping from the faded old tapestry to the curio cabinet filled with dusty heirlooms. Hesitating in the doorway, the young man decided to give the room a closer look before checking the rest of the house. "Dobby, are you in here? " But he found himself distracted from his search at once. The old, battered diary... a yellowed fang the size of a boomerang... a ring without a stone... but the one that always drew his attention, that sent a wave of nausea and excitement through his stomach, was the severed snake's head, stuffed and mounted on a plaque.

"Albie? " Albus Potter's eyes squeezed shut, willing her to go away. Her auburn hair almost preceded her head into the room. "Thanks, Lil. " Of course, it was too much to hope this would be enough to get rid of her, and sure enough Lily crept into the room to stand behind him. "Looking at Dad's, er, trophies again? " "Yeah. "It's... it's kind of morbid. The Mummy - Chapter 1 - thoughtlessblogger - One Direction (Band) [Archive of Our Own] Chapter Text Cairo, Egypt, 1926 "Seti the First volume one. 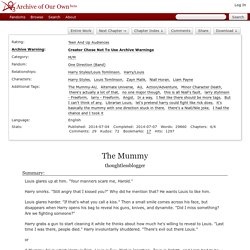