How To Get Creative With Your Kitchen. A cottage style kitchen is one of the most elegant and ideal choice when thinking of adding creativity to it. 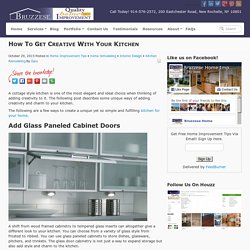 The following post describes some unique ways of adding creativity and charm to your kitchen. The following are a few ways to create a unique yet so simple and fulfilling kitchen for your home. Add Glass Paneled Cabinet Doors A shift from wood framed cabinetry to tempered glass inserts can altogether give a different look to your kitchen. You can choose from a variety of glass style from frosted to ribbed. Tip! Install Open Shelves. Shops And Restaurants Owners Will Have To Keep Doors Closed While Using Cooling Systems.

Posted by Dan Kogan on October 19, 2015 A new law has been formed for the New York City to save energy and protect the environment. 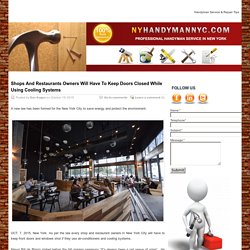 OCT. 7, 2015, New York. As per the law every shop and restaurant owners in New York City will have to keep front doors and windows shut if they use air-conditioners and cooling systems. Mayor Bill de Blasio stated before the bill signing ceremony “It’s always been a pet peeve of mine”. He also said that keeping the doors open is simply a waste of energy and is impacting global warming. In case any shop owner violates the rules, he will be charged with huge penalty starting from $250 for a first offense and $1,000 for an egregious violation. Earlier, a law was passed by the City Council, which had put constraints over the co-mingling of indoor and outdoor air only in large-scale chain stores. The law is exempted for restaurants with outdoor space for al fresco dining, sidewalk cafes and counter-type stores. But not everyone is happy with this decision.

Will This Year Bring an End to New York City’s Veteran Homelessness? Posted by Dan Kogan on September 10, 2015 As per the reports from the mayor’s office, there are around 990 homeless military veterans across the New York City. 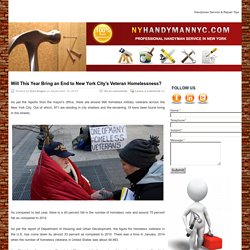 Moving Into A New Home: 5 Things You Need To Know. Making The Right Choice for Windows at Your Home. Posted by Dan Kogan on July 17, 2015 Subscribe Windows are like doorways to the outer world. 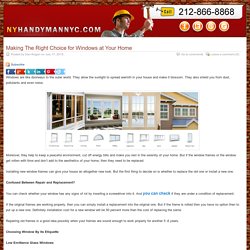 They allow the sunlight to spread warmth in your house and make it blossom. They also shield you from dust, pollutants and even noise. Moreover, they help to keep a peaceful environment, cut off energy bills and make you rest in the serenity of your home .But if the window frames or the window get rotten with time and don’t add to the aesthetics of your home, then they need to be replaced. Installing new window frames can give your house an altogether new look. Confused Between Repair and Replacement? You can check whether your window has any signs of rot by inserting a screwdriver into it. If the original frames are working properly, then you can simply install a replacement into the original one. Repairing old frames is a good idea possibly when your frames are sound enough to work properly for another 5 -6 years. Underground Park will Soon be a Reality in New York. Posted by Dan Kogan on July 8, 2015 As America’s old tradition to be ahead of the world in everything has resulted into one more amazing discoveries. 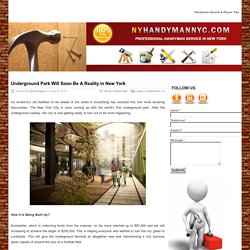 The New York City is soon coming up with the world’s first underground park. After the underground subway, the city is now getting ready to turn out to be more happening. How It is Being Built Up? Kickstarter, which is collecting funds from the masses, so far, have reached up to $87,000 and are still increasing to achieve the target of $200,000. What to Do When You are Locked Out of Your Home? Posted by Dan Kogan on June 26, 2015 Subscribe Have you ever been trapped into a terrible situation, when you returned from your office late and just stepping at your door, you realized that you left your keys in your office? 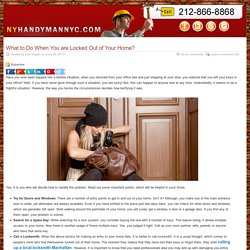 Well, if you have never gone through such a situation, you are lucky! But, this can happen to anyone and at any time. Undoubtedly, it seems to be a frightful situation. Yes, it is you who will decide how to handle the problem. Statue of Liberty Celebrated its 130th Birthday!!! Posted by Dan Kogan on June 20, 2015 United States, New York, Wednesday, 17th June. 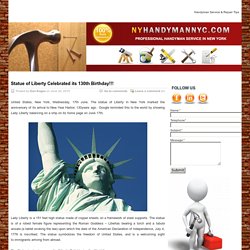 The statue of Liberty in New York marked the anniversary of its arrival to New Year Harbor, 130years ago. Google reminded this to the world by showing Lady Liberty balancing on a ship on its home page on June 17th.