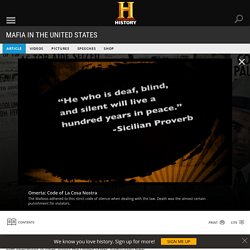 In New York City alone, the number of Italians soared from 20,000 to 250,000 between 1880 and 1890, and by 1910, that number had jumped to 500,000 immigrants and first-generation Italian Americans, or one-tenth of the city’s population, according to historian Thomas Repetto. The majority of these immigrants were law-abiding, but, as with most large groups of people, some were criminals who formed neighborhood gangs, often preying on those in their own communities.

During the 1920s Prohibition era, when the 18th Amendment to the U.S. Organized Crime. Organized crime may be defined as systematically unlawful activity for profit on a city-wide, interstate, and even international scale. 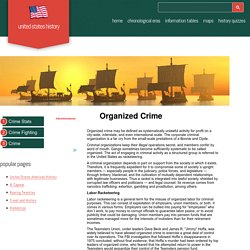 The corporate criminal organization is a far cry from the small-scale predations of a Bonnie and Clyde. Criminal organizations keep their illegal operations secret, and members confer by word of mouth. Gangs sometimes become sufficiently systematic to be called organized. The act of engaging in criminal activity as a structured group is referred to in the United States as racketeering. A criminal organization depends in part on support from the society in which it exists.

Labor racketeering is a general term for the misuse of organized labor for criminal purposes. The Teamsters Union, under leaders Dave Beck and James R. The Mafia Criminal organizations sometimes arise in closely knit immigrant groups that do not trust the local police and other authorities. v8 THP 10CrimeFacts. Economic crises may trigger rise in crime.

3 February 2012 - Crime may peak during economic crises, according to the UNODC report Monitoring the Impact of Economic Crisis on Crime. 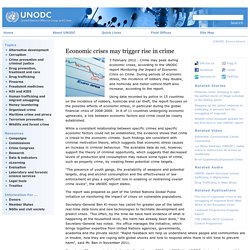 During periods of economic stress, the incidence of robbery may double, and homicide and motor vehicle theft also increase, according to the report. Using data recorded by police in 15 countries on the incidence of robbery, homicide and car theft, the report focuses on the possible effects of economic stress, in particular during the global financial crisis of 2008-2009. In 8 of 11 countries undergoing economic upheavals, a link between economic factors and crime could be clearly established. While a consistent relationship between specific crimes and specific economic factors could not be established, the evidence shows that crime is linked to the economic climate. Such findings are consistent with criminal motivation theory, which suggests that economic stress causes an increase in criminal behaviour. 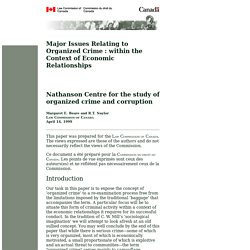 Beare and R.T. NaylorLAW COMMISSION OF CANADAApril 14, 1999 This paper was prepared for the LAW COMMISSION OF CANADA. Ce document a été préparé pour la COMMISSION DU DROIT DU CANADA. Introduction Our task in this paper is to expose the concept of ‘organized crime’ to a re-examination process free from the limitations imposed by the traditional ‘baggage’ that accompanies the term. This paper is divided into six parts (plus a bibliography and an appendix): A.

Drugs and Crime as a Threat to Development. 26 June 2012 – New York Background In the past decade, there has been significant growth in the illicit trafficking of drugs, people, firearms, and natural resources. 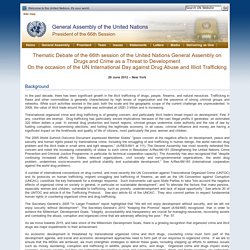 Trafficking in these and other commodities is generally characterized by high levels of organization and the presence of strong criminal groups and networks. While such activities existed in the past, both the scale and the geographic scope of the current challenge are unprecedented. In 2009, the value of illicit trade around the globe was estimated at US$1.3 trillion and is increasing. Transnational organized crime and drug trafficking is of growing concern, and particularly illicit trade’s broad impact on development. The Secretary General’s 2005 "In Larger Freedom” report highlighted that “We will not enjoy development without security, and we will not enjoy security without development". 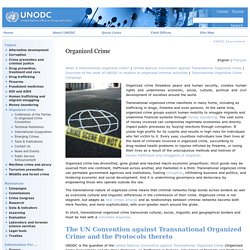 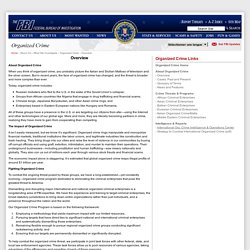 But in recent years, the face of organized crime has changed, and the threat is broader and more complex than ever. Today, organized crime includes: Russian mobsters who fled to the U.S. in the wake of the Soviet Union’s collapse;Groups from African countries like Nigeria that engage in drug trafficking and financial scams;Chinese tongs, Japanese Boryokudan, and other Asian crime rings; andEnterprises based in Eastern European nations like Hungary and Romania. All of these groups have a presence in the U.S. or are targeting our citizens from afar—using the Internet and other technologies of our global age.