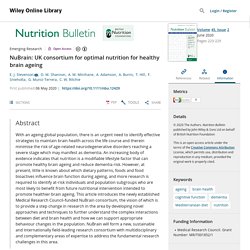 As older people account for the majority of health and social services spending, an increasing population share will result in greater demand on services if not mitigated by healthy ageing (Beard & Bloom 2015). In recognition, the World Health Organization (WHO) has highlighted ‘Ageing Well’ as a priority public health message, whilst UK research bodies including the Medical Research Council (MRC), the National Institute for Health Research (NIHR) and UK Research and Innovation (UKRI) have identified healthy ageing as a priority research area. In most people, cognitive function – particularly aspects of memory, executive function, processing speed and reasoning – declines with age. Nutrition and healthy brain ageing Nutrition has emerged as a modifiable lifestyle factor to promote healthy brain ageing and reduce dementia risk (Livingston et al. 2017). 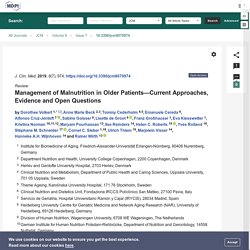 Lacking Evidence in Many Fields Despite increasing numbers of systematic reviews on the topic, more than half of the recommendations in the ESPEN guideline are “good practice points”, meaning that they are based on the clinical experience of the guideline development group because of a lack of studies [49]. The level of evidence of only 15 of the 82 recommendations justifies a grade A recommendation, and only three recommendations are directed towards patient-centered outcomes [21]. Regarding outcome parameters, most studies testing the effects of supportive interventions or food modification focus on dietary intake but do not include functional or clinical outcomes.

Most randomised clinical trials performed have examined the effects of ONS in (malnourished) older adults. 3.2. ESPEN guideline on clinical nutrition and hydration in geriatrics - Clinical Nutrition. CE: Malnutrition in Older Adults : AJN The American Journal of Nursing. In 2015 (the most recent year for which data are available), the number of Americans age 65 or older was 47.8 million—a figure that represented a 30% increase since 2005.1 According to estimates from the Centers for Disease Control and Prevention, by 2050, one in five Americans will be 65 or older,2 and the United Nations anticipates that the number of adults who were 60 and older in 2015 will double worldwide by 2050 to nearly 2.1 billion.3 Generally, older adults perceive themselves as healthy, with more than three-quarters of Americans ages 65 and older assessing their health as good to excellent.4 Despite their healthy self-image, however, many older adults are at risk for malnutrition, a condition that can occur in frail, underweight older adults as well as in overweight and obese older adults whose nutritional needs are unmet. 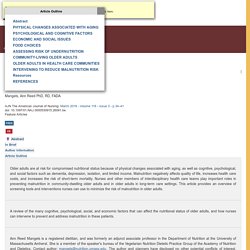 Prevention of sarcopenia is important for reducing risk of fracture and osteoporosis and it appears that higher levels of dietary protein, particularly when combined with resistance exercise, can effectively reduce fracture risk and osteoporosis. 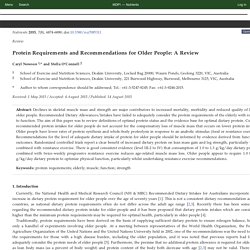 Data from longitudinal studies support the premise that higher dietary intakes of protein reduce age-related muscle loss [53,54,55] and only one failed to find an association with protein intake [56] (Table 2). For example, in a 3-year longitudinal study in 2066 people, those in the highest quintile of protein intake lost approximately 40% less lean mass than did those in the lowest quintile of protein [53]. A study that followed over 300 older people for 10 years (average age 72 years at baseline) [57] found that those on protein intakes in the range 1.20–1.76 g/kg/day had better health outcomes compared to those with protein intake less than the mid-point within the range 0.8–1.2 g/kg/day. 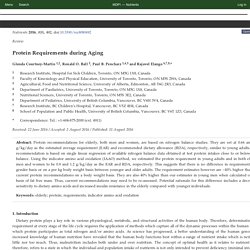 Introduction Dietary protein plays a key role in various physiological, metabolic, and structural activities of the human body. Therefore, determination of its requirement at every stage of the life cycle requires the application of methods which capture all of the dynamic processes within the human body in which protein participates as total nitrogen and/or amino acids.

As science has progressed, a better understanding of the human genome and increased knowledge of human nutrition have revealed that the human body functions best within a range of nutrient intake which is neither too little nor too much. Thus, malnutrition includes both under and over nutrition. Aging is accompanied by considerable changes in body composition with increases in fat mass and a progressive loss of skeletal mass [1]. 2. Current protein intake recommendations for all life stages are set by the Institute of Medicine as the Dietary Reference Intakes (DRI) [10]. Figure 1. 3. Figure 2.