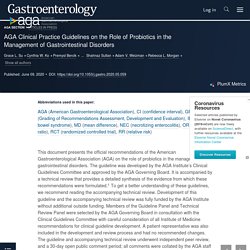 The guideline was developed by the AGA Institute’s Clinical Guidelines Committee and approved by the AGA Governing Board. It is accompanied by a technical review that provides a detailed synthesis of the evidence from which these recommendations were formulated. Preidis G.A. American Gastroenterological Association Institute Technical Review on the Role of Probiotics in the Management of Gastrointestinal Disorders. Gastroenterology. 2020; XX () Sanders M.E. Sniffen J.C. Suez J. Probiotics and gastrointestinal conditions: An overview of evidence from the Cochrane Collaboration - Nutrition. A new review covers current scientific evidence for weight manipulation through targeting the gut microbiota. Previous evidence from both mouse models and humans has suggested that manipulation of the gut microbiota could help us understand how to deal with the current global obesity epidemic. 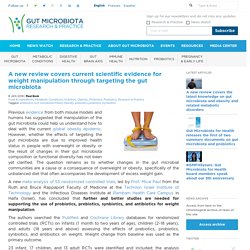 However, whether the effects of targeting the gut microbiota are due to improved health status in people with overweight or obesity or the result of changes in their gut microbiota composition or functional diversity has not been yet clarified. The question remains as to whether changes in the gut microbial communities are a cause or a consequence of overweight or obesity, specifically of the unbalanced diet that often accompanies the development of excess weight gain. A new meta-analysis of 53 randomized controlled trials, led by Prof. 23 infant, 17 children, and 13 adult RCTs were identified and included; the analysis included both RCTs and cross-over RCTs if they reported outcomes at the end of the first cross-over period. In infants, 14 trials examined probiotics, 5 prebiotics, and 4 synbiotics. Probiotics, Prebiotics, and Synbiotics for the Treatment and Prevention of Adult Dermatological Diseases.

New hypothesis: 'All healthy microbiomes are similar; each dysbiotic microbiome is dysbiotic in its own way' When Leo Tolstoy wrote the first line of his classic novel Anna Karenina—“All happy families are like one another; each unhappy family is unhappy in its own way”—he probably never thought it would apply to gut microbiomes. 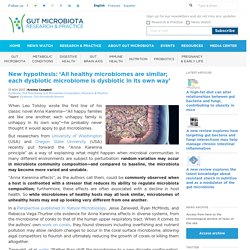 But researchers from University of Washington (USA) and Oregon State University (USA) recently put forward the “Anna Karenina principle” as a way of explaining what might happen when microbial communities in many different environments are subject to perturbation: random variation may occur in microbiota community composition—and compared to baseline, the microbiota may become more varied and unstable. “Anna Karenina effects”, as the authors call them, could be commonly observed when a host is confronted with a stressor that reduces its ability to regulate microbiota composition; furthermore, these effects are often associated with a decline in host health. Reference: Zaneveld JR, McMinds R, & Thurber RV.

Consensus statement on the definition and scope of prebiotics. Probiotics and Prevention of Antibiotic-Associated Diarrhea in Kids. Indications and Recommendations by Societies and Institution... : Journal of Pediatric Gastroenterology and Nutrition. Functional gastrointestinal disorders (FGIDs) are defined as a variable combination of age-dependent, chronic or recurrent gastrointestinal symptoms not explained by structural or biochemical abnormalities. 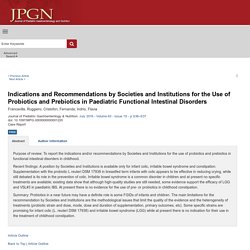 The term functional emphasizes that many of symptoms are not related to a disease state but rather should be interpreted as an exaggerated response to an otherwise normal internal or external cues. FGIDs are still a cause of distress in children and their families and a better understanding of this condition has helped to address more effective treatments (first reassurance) based on the precise classification of the disorder and taking in to account the physiological and psychological contributions to symptoms. Gut Microbiota: the Rational for the Use of Pro/Prebiotics in FGIDs Infantile Colic Colic is a common problem in healthy, thriving infants (among 5% and 19%) that is characterised by excessive crying during the first few months of life.

Irritable Bowel Syndrome 1. 2. 3. 4. 5. Use of Probiotics for Management of Acute Gastroenteritis: A Position Paper by the ESPGHAN Working Group for Probiotics and Prebiotics. Acute gastroenteritis (AGE) has been defined by the European Society for Pediatric Gastroenterology, Hepatology, and Nutrition (ESPGHAN) as a decrease in the consistency of stools (loose or liquid) and/or an increase in the frequency of evacuations (typically ≥3 in 24 hours), with or without fever or vomiting (1a). 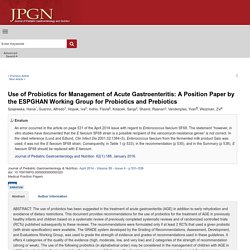 Diarrhea typically lasts <7 days and not longer than 14 days. In Europe, it is estimated that the incidence of AGE ranges from 0.5 to 1.9 episodes per child per year in children up to 3 years of age (1a). Rehydration is the key treatment and should be applied as soon as possible. Regular feeding should not be interrupted and should be carried on immediately after initial rehydration. Drugs are generally not necessary, although some have an impact on the duration and symptoms of AGE. This document provides a systematic review of previously completed systematic reviews and of randomized controlled trials (RCTs) published subsequently to these reviews. 1. 2. 3.