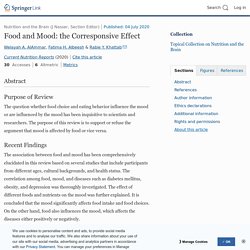 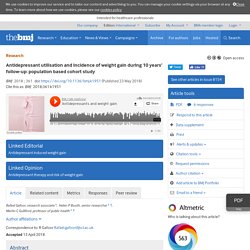 Design Population based cohort study. Setting General practices contributing to the UK Clinical Practice Research Datalink, 2004-14. Participants 136 762 men and 157 957 women with three or more records for body mass index (BMI). Main outcome measures The main outcomes were antidepressant prescribing, incidence of ≥5% increase in body weight, and transition to overweight or obesity. Results In the year of study entry, 17 803 (13.0%) men and 35 307 (22.4%) women with a mean age of 51.5 years (SD 16.6 years) were prescribed antidepressants. Conclusion Widespread utilisation of antidepressants may be contributing to long term increased risk of weight gain at population level. Preventing Depression Through Food. The Effects of Dietary Improvement on Symptoms of Depression... : Psychosomatic Medicine. Depressive disorders affect more than 300 million people around the world and are associated with unemployment, poor physical health, impaired social functioning, and, in its most severe forms, suicide (1). 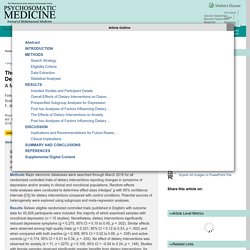 Thus, depressive disorders incur considerable burden not only for individuals but also for society because of the high economic cost from lost productivity and demand on healthcare services (2). The same can be said for anxiety disorders, which, along with depression, are also classified as “common mental disorders” because of their prevalence across the globe, with approximately one in five people experiencing one of these conditions for any given year (3). 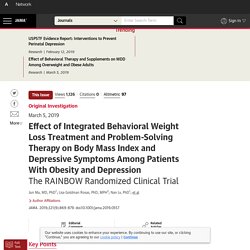 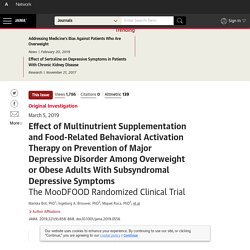 Findings In this 2 × 2 factorial randomized clinical trial that included 1025 adults, there was no significant difference in episodes of major depressive disorder over 1 year of follow-up with multinutrient supplementation vs placebo (54 [10.5%] vs 51 [9.9%]) or with food-related behavioral activation therapy vs no therapy (48 [9.4%]) vs 57 [11.1%]). Meaning These findings do not support the use of multinutrient supplementation or food-related behavioral activation therapy for prevention of major depressive disorder. Importance Effects of nutritional interventions on the prevention of major depressive disorder (MDD) in overweight adults are unknown. Trial registration ClinicalTrials.gov Identifier: NCT02529423. Diet and Depression—From Confirmation to Implementation. The MooDFOOD project: Prevention of depression through nutritional strategies - Cabout - 2017 - Nutrition Bulletin.

Abstract MooDFOOD is a ‘Multi-country cOllaborative project on the rOle of Diet, Food-related behaviour, and Obesity in the prevention of Depression’. 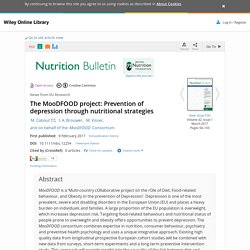 Depression is one of the most prevalent, severe and disabling disorders in the European Union (EU) and places a heavy burden on individuals and families. A large proportion of the EU population is overweight, which increases depression risk. The effects of dietary improvement on symptoms of depression... : Psychosomatic Medicine.