How do you determine if there is something psychologically wrong or unhealthy about a person? How do you decide what's normal and what's abnormal? If you were to define disorder as something that lies outside of the statistical norm, then people who are considered exceptionally talented or gifted in a particular area would be regarded as abnormal. 6 common mental disorders affecting Singaporeans today and where you can go to get help, Business Insider - Business Insider Singapore. Pexels. Depression (major depressive disorder) Overview Depression is a mood disorder that causes a persistent feeling of sadness and loss of interest. Also called major depressive disorder or clinical depression, it affects how you feel, think and behave and can lead to a variety of emotional and physical problems. You may have trouble doing normal day-to-day activities, and sometimes you may feel as if life isn't worth living.

More than just a bout of the blues, depression isn't a weakness and you can't simply "snap out" of it. Depression may require long-term treatment. Depression care at Mayo Clinic Symptoms Although depression may occur only once during your life, people typically have multiple episodes. For many people with depression, symptoms usually are severe enough to cause noticeable problems in day-to-day activities, such as work, school, social activities or relationships with others. Binge Drinking (a form of alcohol abuse) Q: I’ve often heard about youths who binge drink when they go clubbing. What is “binge-drinking” and how different is it from alcohol addiction? Binge drinking (a form of alcohol abuse) is defined as the consumption of alcohol to intoxication in a short period of time. According to the Diagnostic and Statistical Manual of Mental Disorders IV-TR, alcohol abusers drink despite recurrent social, interpersonal, or legal problems as a result of alcohol use.

Some examples of such problems include sustaining injuries while driving a vehicle under the influence of alcohol, or failure to attend to important responsibilities at work, home or school. Generally, there are two types of binge drinking: Obsessive-Compulsive Disorder (OCD) Anxiety and Depression Association of America, ADAA. Understanding GAD - and the Symptoms Generalized Anxiety Disorder (GAD) is characterized by persistent and excessive worry about a number of different things. 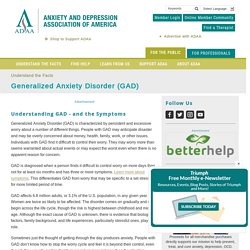 People with GAD may anticipate disaster and may be overly concerned about money, health, family, work, or other issues. Individuals with GAD find it difficult to control their worry. They may worry more than seems warranted about actual events or may expect the worst even when there is no apparent reason for concern. GAD is diagnosed when a person finds it difficult to control worry on more days than not for at least six months and has three or more symptoms. GAD affects 6.8 million adults, or 3.1% of the U.S. population, in any given year. Sometimes just the thought of getting through the day produces anxiety. When their anxiety level is mild to moderate or with treatment, people with GAD can function socially, have full and meaningful lives, and be gainfully employed. Learn more symptoms. Treatment Information: References Resources: Treatment of Psychological Diseases and Disorders.

According to the most recent Diagnostic and Statistical Manual of Mental Disorders (DSM 5), there are nearly 400 different psychological disorders. 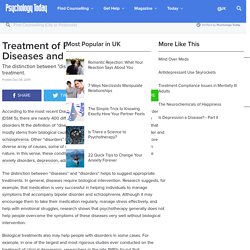 Some of these disorders fit the definition of “disease,” a problem that impairs functioning and that mostly stems from biological causes. Common examples include bipolar disorder and schizophrenia. Other “disorders” impair functioning but are determined by a more diverse array of causes, some of which are psychological and social / cultural in nature. In this sense, these conditions are not true “diseases.” Examples include anxiety disorders, depression, addictive disorders, and eating disorders. article continues after advertisement The distinction between “diseases” and “disorders” helps to suggest appropriate treatments. Biological treatments also may help people with disorders in some cases. On the other hand, decades of carefully controlled clinical studies have shown that medication often is not the best treatment for many disorders. DSM-5 List of Mental Disorders. Did you know? Mental health in Singapore.

More people in Singapore have experienced a mental disorder in their lifetime, study finds. SINGAPORE — One in seven people in Singapore have experienced a mental disorder such as bipolar disorder or alcohol abuse in their lifetime, an increase from roughly one in eight several years ago. The top three mental disorders here were major depressive disorder, alcohol abuse and obsessive compulsive disorder. This is based on the finding of the second Singapore Mental Health Study, which started in 2016 and involved interviews with 6,126 Singaporeans and permanent residents.

Read also Gen Y Speaks: What caring for my mum taught me about mental illness The lifetime prevalence of 13.9 per cent in 2016 marked an increase from 12 per cent in 2010, when the first study was conducted.

How to help somone with Mental Health disorder