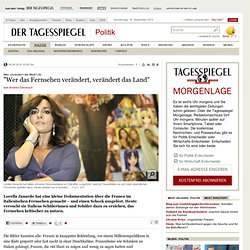 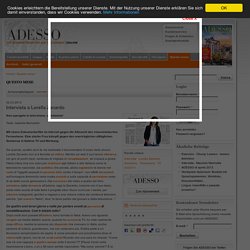 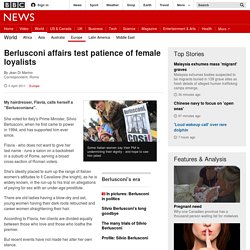 She voted for Italy's Prime Minister, Silvio Berlusconi, when he first came to power in 1994, and has supported him ever since. Flavia - who does not want to give her last name - runs a salon on a backstreet in a suburb of Rome, serving a broad cross-section of Roman voters. She's ideally placed to sum up the range of Italian women's attitudes to Il Cavaliere (the knight), as he is widely known, in the run-up to his trial on allegations of paying for sex with an under-age prostitute. There are old ladies having a blow-dry and set, young women having their dark roots retouched and career women straightening their hair. According to Flavia, her clients are divided equally between those who love and those who loathe the premier. Eenvadaag - 5 aprile 2011.

3SAT - Italiens Frauen gegen Berlusconi - 8 marzo 2011. China CCTV News - 21 febbraio 2011. BBC News - Can Italian PM Berlusconi survive the scandals? - 15 gennaio 2010. The feminine mistake - CBC - 14 dicembre 2009. When Milanese businesswomen Lorella Zanardo decided to make a short documentary critiquing the sexist and humiliating depictions of women on Italian television, her expectations were modest. 'I thought that we'd make this video, put it on DVD and take it around to high schools to get kids thinking about the issue. 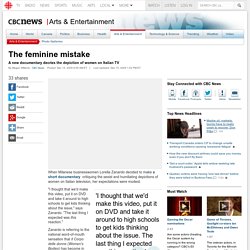 The last thing I expected was this reaction.' — Italian documentarian Lorella Zanardo "I thought that we'd make this video, put it on DVD and take it around to high schools to get kids thinking about the issue," says Zanardo. "The last thing I expected was this reaction. " Zanardo is referring to the national word-of-mouth sensation that Il Corpo delle donne (Women's Bodies) has become in Italy. Zanardo has been flooded with invitations to present her documentary – not only from high schools, but also from university, political and women's groups, as well as mainstream political talk shows.

"It clearly came at the right time," says Zanardo. National Public Radio - 28 ottobre 2009. Cafe Babel - 6 ottobre 2009. A collection of samples taken from public and private Italian television channels, Il Corpo delle Donne ('Women’s Bodies') is dedicated to the image and role of women - and the results are chilling. 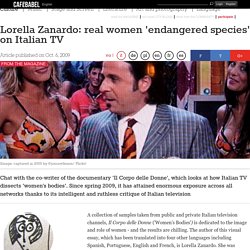 The author of this visual essay, which has been translated into four other languages including Spanish, Portuguese, English and French, is Lorella Zanardo. She was European brand manager for Unilever in Milan and Paris, marketing director for Gruppo Mondadori, holds an MBA and a degree in English and German literature, been a theatre and cinema actress and also runs her own consultancy, Sportgate. The mother-of-two is now more known as a consultant and lecturer on feminist issues. We meet to discuss Zanardo's sensitisation campaign concerning gender differences and the rights laid out in article three of the Italian constitution.

She has two ways of ensuring that her valuable work does not lose momentum, to not merely turn into a passing fad. Unilever: A Guiding Passion - Forté Foundation. Lorella Zanardo grew up in Italy and studied English and German literature abroad. 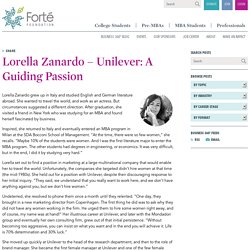 She wanted to travel the world, and work as an actress. But circumstances suggested a different direction. After graduation, she visited a friend in New York who was studying for an MBA and found herself fascinated by business. Inspired, she returned to Italy and eventually entered an MBA program in Milan at the SDA Bocconi School of Management. “At the time, there were so few women,” she recalls. Lorella set out to find a position in marketing at a large multinational company that would enable her to travel the world. Undeterred, she resolved to phone them once a month until they relented. She moved up quickly at Unilever to the head of the research department, and then to the role of brand manager. At first she felt overwhelmed. “I chose to have a very charming apartment a bit away from the company. Recently, Lorella changed direction. Her MBA continues to inform much of Lorella’s approach. . Recensione - Il Corpo delle Donne.

Not every Italian woman is a scantily clad blonde. 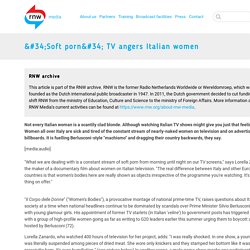 Although watching Italian TV shows might give you just that feeling.