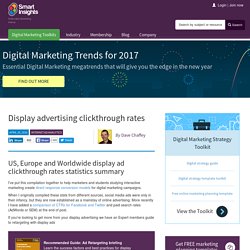 When I originally compiled these stats from different sources, social media ads were only in their infancy, but they are now established as a mainstay of online advertising. More recently I have added a comparison of CTRs for Facebook and Twitter and paid search rates (AdWords or SEM) at the end of post. If you're looking to get more from your display advertising we have an Expert members guide to retargeting with display ads Recommended Guide: Ad Retargeting briefing Learn the success factors and best practices for display advertising from Emma Ashby who works as Display Manager at epiphany.

Download our Ad retargeting guide Display Ad CTR benchmarks - April 2016 update 1. Across all ad formats and placements Ad CTR is 0.17% 2. Rich media Ad CTR is 0.1% 3. 4. Chi_è_che_clicca_sulla_pubb_online_?_Who clicks on ads? And what might this mean? Advertising is the bread and butter of the web, yet most of my friends claim that they never click on ads, typically using a peacock tone that signals their pride in being ad-averse. 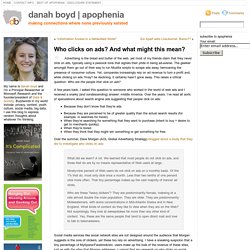 The geekier amongst them go out of their way to run Mozilla scripts to scrape ads away, bemoaning the presence of consumer culture. Yet, companies increasingly rely on ad revenue to turn a profit and, while clicking on ads ? May? Be declining, it certainly hasn’t gone away. This raises a critical question: Who are the people that click on ads? A few years back, I asked this question to someone who worked in the world of web ads and I received a snarky (and condescending) answer: middle America. Because they don’t know that they’re ads. Over the summer, Dave Morgan (AOL Global Advertising Strategy) blogged about a study that they did to investigate who clicks on ads: What did we learn?

More representative of lower income households than the average user. Of course, my hypothesis may be wrong. La_crescita_degli_ad_blocker_Targeted Advertising Considered Harmful. The Waste in Advertising Is the Part That Works. Il_banner_vuoto_che_raccoglie_più_click_The Incredible Click Rate of Nothing. This is the story of a blank display ad that notched twice the click-through rate of the average branding one. 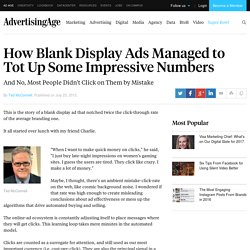 It all started over lunch with my friend Charlie. "When I want to make quick money on clicks," he said, "I just buy late-night impressions on women's gaming sites. I guess the users are tired. They click like crazy. I make a lot of money. " Maybe, I thought, there's an ambient mistake-click-rate on the web, like cosmic background noise. The online-ad ecosystem is constantly adjusting itself to place messages where they will get clicks. Clicks are counted as a surrogate for attention, and still used as our most important currency (i.e. cost-per-click).

Sure, every control system has a little noise in its signals. But in this case, the issue for advertisers would arise when clicks that mean nothing (noise) overwhelm the clicks that indicate, or result from, interest in the advertising message (signal). So what is the mistake rate? To find out, we built and trafficked an ad. La_pubblicità_online_funziona_?_Google Display Ad Viewability Study. More than half the ads across the net are never seen by a human, Google says.Flickr CC/Prícia Online ad viewability is a hot topic in advertising right now, as marketers are becoming more aware (and concerned) that many of the ads they buy online are never actually seen by people. 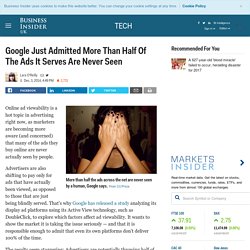 Advertisers are also shifting to pay only for ads that have actually been viewed, as opposed to those that are just being blindly served. That's why Google has released a study analyzing its display ad platforms using its Active View technology, such as DoubleClick, to explore which factors affect ad viewability. It wants to show the market it is taking the issue seriously — and that it is responsible enough to admit that even its own platforms don’t deliver 100% of the time. The results seem staggering: Advertisers are potentially throwing half of their budgets away every time they pay for display ads. The reason so many ads are unviewable? Page position really matters. Google. Rapporto_tra_pubblicità_e_web_A fresh start for advertising and the web? Sat 13 Sep 2014 08:03:45 AM PDT Is advertising ruining the web? 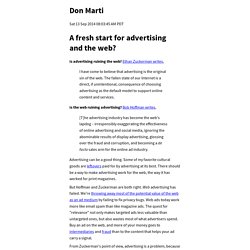 Ethan Zuckerman writes, I have come to believe that advertising is the original sin of the web. The fallen state of our Internet is a direct, if unintentional, consequence of choosing advertising as the default model to support online content and services. Is the web ruining advertising? [T]he advertising industry has become the web's lapdog – irresponsibly exaggerating the effectiveness of online advertising and social media, ignoring the abominable results of display advertising, glossing over the fraud and corruption, and becoming a de facto sales arm for the online ad industry. Advertising can be a good thing. But Hoffman and Zuckerman are both right. From Zuckerman's point of view, advertising is a problem, because advertising is full of creepy stuff. So let's re-introduce the web to advertising, only this time, let's try it without the creepy stuff.