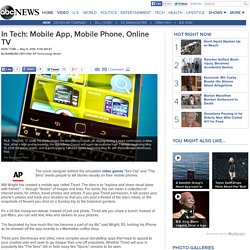 Will Wright has created a mobile app called Thred. The idea is to "explore and share visual ideas with friends" — through "threds" of images and links. For some, this can mean a collection of Internet jokes; for others, travel photos and articles. If you give Thred permission, it will access your phone's photos and track your location so that you can post a thread of the day's meals, or the snapshots of flowers you shot on a Sunday trip to the botanical gardens. Augmented Reality Transforming Education. Below is a wonderful slideshow on augmented reality I have discovered through Dawsonite. 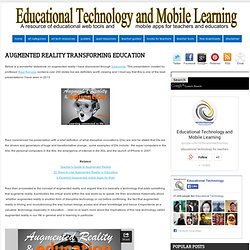 This presentation created by professor Raul Reinoso contains over 200 slides but are definitely worth viewing and I must say that this is one of the best presentations I have seen in 2013. Raul commenced his presentation with a brief definition of what disruptive innovations (DIs) are and he stated that DIs are the drivers and generators of huge and transformative change ; some examples of DIs include : the super computers in the 60s, the personal computers in the 80s, the emergence of internet in the 90s, and the launch of iPhone in 2007. 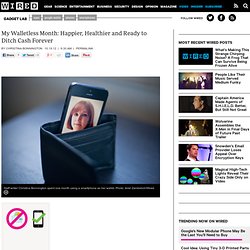 Photo: Ariel Zambelich/Wired The e-wallet space is blowing up. Isis — an NFC-based mobile-payment platform backed by Verizon, AT&T, and T-Mobile — is set to launch on Monday. Google Wallet, now almost two years old, is nicely maturing with partnerships with an ever-expanding list of big-name retailers. Apple’s Passbook feature coordinates with existing apps so coupons and gift cards are collected in a single place. So one month ago, that got us thinking: How long before we could get by using just our smartphones as our wallets? Wielding an iPhone 5 and a Samsung Galaxy Nexus, I loaded up on apps, got on board with Google Wallet, and left my real wallet at home. Square hits brakes on taxi payment system as new rules loom. Square, the mobile-payments firm founded by Jack Dorsey, abruptly ended a pilot program last week for a new payment system in the back of New York City cabs. 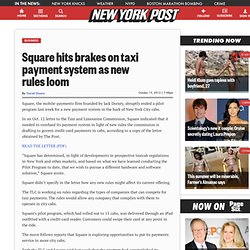 In an Oct. 12 letter to the Taxi and Limousine Commission, Square indicated that it needed to overhaul its payment system in light of new rules the commission is drafting to govern credit-card payments in cabs, according to a copy of the letter obtained by The Post. “Square has determined, in light of developments in prospective taxicab regulations in New York and other markets, and based on what we have learned conducting the Pilot Program to date, that we wish to pursue a different hardware and software solution,” Square wrote. Square didn’t specify in the letter how any new rules might affect its current offering. The TLC is working on rules regarding the types of companies that can compete for taxi payments.

The rules would allow any company that complies with them to operate in city cabs. gsloane@nypost.com. Google Wallet Wins and Fails: Walletless Week 2. Staff Writer Christina Bonnington uses Google Wallet at a local coffee shop. 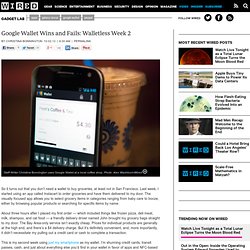 Photo: Alex Washburn/Wired So it turns out that you don’t need a wallet to buy groceries, at least not in San Francisco. Last week, I started using an app called Instacart to order groceries and have them delivered to my door. The visually focused app allows you to select grocery items in categories ranging from baby care to booze, either by browsing popular products or searching for specific items by name. About three hours after I placed my first order — which included things like frozen pizza, deli meat, milk, shampoo, and cat food — a friendly delivery driver named John brought my grocery bags straight to my door. Mobile Could Be What Makes Private Social Networks Succeed. 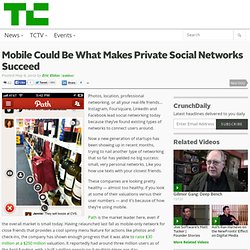 Now a new generation of startups has been showing up in recent months, trying to nail another type of networking that so far has yielded no big success: small, very personal networks. Like you how use texts with your closest friends. These companies are looking pretty healthy — almost too healthy, if you look at some of their valuations versus their user numbers — and it’s because of how they’re using mobile. Path is the market leader here, even if the overall market is small today.

Having relaunched last fall as mobile-only network for close friends that provides a cool spinny menu feature for actions like photos and check-ins, the company has shown enough progress that it was able to raise $30 million at a $250 million valuation.