Wallaby Financial. The Next Big E-Commerce Wave: Vertically Integrated Commerce. Editor’s note: Boris Wertz is the founder of version one ventures, and has invested in more than 35 early-stage consumer Internet and mobile companies, including Chloe & Isabel, Julep, and Indochino. 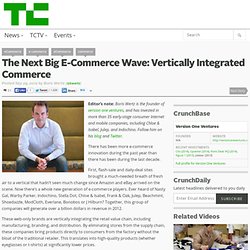 Follow him on his blog and Twitter. Wittlebee Grabs ShoeDazzle Customer Acquisition Superstar Chris Nella. By Michael Carney On October 4, 2012 As any successful entrepreneur will say, assembling the right team is key to any venture. 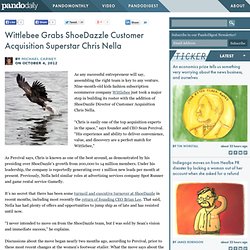 Nine-month-old kids fashion subscription ecommerce company Wittlebee just took a major step in building its roster with the addition of ShoeDazzle Director of Customer Acquisition Chris Nella. “Chris is easily one of the top acquisition experts in the space,” says founder and CEO Sean Percival. The beauty of Birchbox: it’s not subscription commerce, it’s marketing that women actually pay for. By Erin Griffith On October 19, 2012. 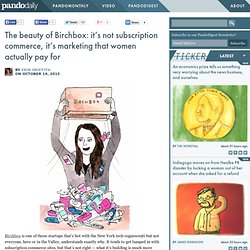 Neighborhood Residents Can Now Decide Which Businesses Will Come To The Area. 4 ways to compete in Amazon’s shadow. “If it has a UPC code, Amazon will beat you.” 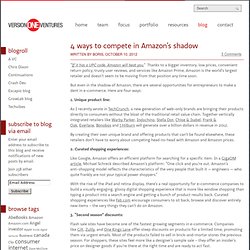 Thanks to a bigger inventory, low prices, convenient return policy, trusty user reviews, and services like Amazon Prime, Amazon is the world’s largest retailer and doesn’t seem to be moving from that position any time soon. But even in the shadow of Amazon, there are several opportunities for entrepreneurs to make a dent in e-commerce. Here are four ways: 1. Unique product line: As I recently wrote in TechCrunch, a new generation of web-only brands are bringing their products directly to consumers without the bloat of the traditional retail value chain.

By creating their own unique brand and offering products that can’t be found elsewhere, these retailers don’t have to worry about competing head-to-head with Amazon and Amazon prices. 2. Like Google, Amazon offers an efficient platform for searching for a specific item. 3. Flash sale sites have become one of the fastest growing segments in e-commerce. 4.

S-commerce. Passbook Gives App Store Apps Massive Position Boost. Whatever the concerns have been about Apple’s Passbook and educating customers so far, it’s clear that people really want to use it. The introduction of Passbook support to a variety of ticketing apps has seen their popularity skyrocket in the App Store. Nearly every ticketing app that has implemented Passbook since Apple released iOS 6 on the 19th of last month has gotten an in-category boost as well as a cross-category boost in its placement on Apple’s charts. The graphs below are from the apps’ entries on the popular App Store tracking service AppShopper. Each of the vertical growth spikes you see in category positions coincide directly with their Passbook support updates. It doesn’t hurt that Apple has featured these Passbook supporting apps in a dedicated section of the App Store that is accessible via a button directly in the initially empty Passbook app on the home screen of every iOS 6 device. 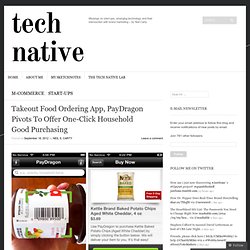 It launched as a mobile app allowing users to place restaurant takeout orders (mainly food trucks), purchase inside the app and then pick up their orders once the food is ready. From the beginning, they told investors their plan was to “offer the easiest solution for consumers to buy any offline product from their mobile devices.” They’ve done just that in an update today. I loved the concept then but I love their pivot announced today even more! Essentially the new functionality allows users to scan the bar code of any household item, place the order with one-click and then have the item shipped to their door in two to three days.

The idea is to get consumers comfortable with ordering items the moment they recognize the need, while they’re in their pantry. Please read the news coverage that inspired this post TechCrunch – April 2012PandoDaily – September 2012. Ecommerce: The Supply Chain Perspective. By Michael Hsieh On July 2, 2012 To build a successful ecommerce business, it’s critical to make sure customer lifetime value is higher than customer acquisition cost. 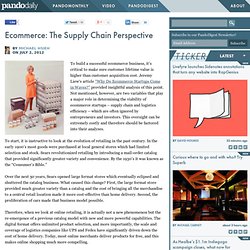 Jeremy Liew‘s article “Why Do Ecommerce Startups Come in Waves?” Provided insightful analysis of this point. Not mentioned, however, are two variables that play a major role in determining the viability of ecommerce startups – supply chain and logistics efficiency – which are often ignored by entrepreneurs and investors. This oversight can be extremely costly and therefore should be factored into their analyses. To start, it is instructive to look at the evolution of retailing in the past century. Over the next 50 years, Sears opened large format stores which eventually eclipsed and shuttered the catalog business. Why Do Ecommerce Startups Come in Waves? By Jeremy Liew On June 20, 2012 It may seem daunting to think about starting a company like Amazon, Zappos, or Shoedazzle* from scratch. 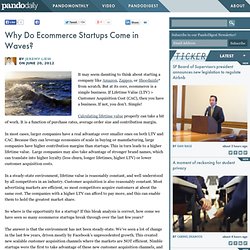 But at its core, ecommerce is a simple business. If Lifetime Value (LTV) > Customer Acquisition Cost (CAC), then you have a business. If not, you don’t. Simple! Calculating lifetime value properly can take a bit of work. In most cases, larger companies have a real advantage over smaller ones on both LTV and CAC.