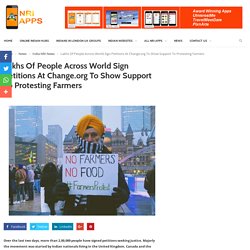 Majorly the movement was started by Indian nationals living in the United Kingdom, Canada and the United States. The ongoing farmers’ protest against the Centre’s three amendments in the farm laws has shaken the national conscience. Arriving in a convoy of tractors and on foot, thousands of farmers braved water cannons, tear gas and lathi-charge by the Police at various border points of the national capital. Wanna fly abroad? Where all Indians can travel amid Covid-19 pandemic. Scheduled international flights have been suspended in India since March 23 due to the Covid-19 pandemic. 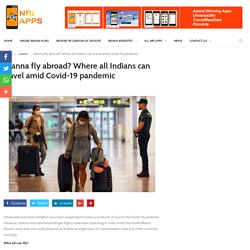 However, special international passenger flights have been operating in India under the Vande Bharat Mission since May and under bilateral air bubble arrangements formed between India and other countries since July. Who all can fly? Awesome New electric cars coming in 2021, which one is your fav? Many brands now have an electric car in their line-up, but that doesn’t mean the wave of new arrivals to the market is showing any signs of slowing down. 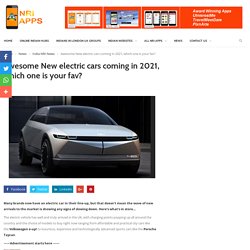 Here’s what’s in store… The electric vehicle has well and truly arrived in the UK, with charging points popping up all around the country and the choice of models to buy right now ranging from affordable and practical city cars like the Volkswagen e-up! To luxurious, expensive and technologically advanced sports cars like the Porsche Taycan. Infosys Will Hire 100% More Employees In Canada; Focus On AI, Robotics Projects. As per Infosys co-Founder and non-executive Chairman Nandan Nilekani, they will double their headcount in Canada, and expand their business with some very interesting plans. 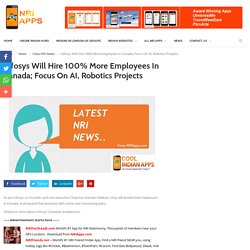 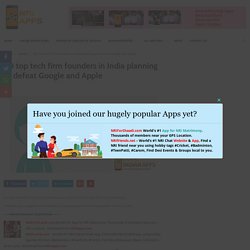 And perhaps strengthen the country’s burgeoning eCommerce ecosystem in the process. ——Advertisement starts here —— NRIfriends.net – World’s #1 NRI Friend Finder App, Find a NRI friend NEAR you, using hobby tags like #Cricket, #Badminton, #TeenPatti, #Carom. Find Desi Bollywood, Diwali, Holi Events local to you. Download from NRIApps.com ———Advertisement ends here ——— Bloomberg reported on Thursday (Oct. 1), the founders of dozens of tech firms housed in India held a Zoom call aimed at setting the wheels in motion to form what’s being billed as a “startup collective” to battle Big Tech — Google and Facebook, among others — across a number of fronts.

The call took place on Tuesday (Sept. 29), according to reports, and involved more than 50 tech firm founders. Names being considered for the collective include the India Internet Foundation, among others. Is astrology important for a matrimonial relationship? Matrimony, the holiest of all alliances, in all cultures but especially in the Indian context. 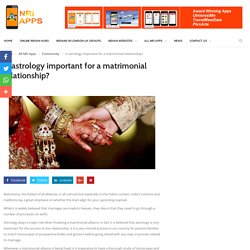 India’s customs and traditions lay a great emphasis on whether the stars align for your upcoming nuptials. While it is widely believed that marriages are made in heaven, they idea is that they need to go through a number of processes on earth. Astrology plays a major role when finalising a matrimonial alliance. In fact it is believed that astrology is very important for the success of any relationship. It is a very normal practice in our country for parents/families to match horoscopes of prospective brides and grooms before going ahead with any step or process related to marriage. 7 India's richest beggars and their luxurious lifestyle, own properties worth crores. India being the second-largest country in terms of population, in what appears to be prosperous and blooming, reportedly has the highest numbers of beggars across the continent. 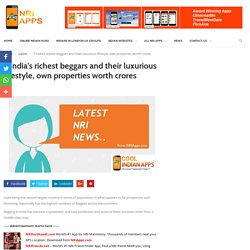 Begging in India has become a systematic and easy profession and some of them are even richer than a middle-class man. Five tools to make your Zoom video calls fun and more productive. Video conferencing has become the need of the hour during this global pandemic. 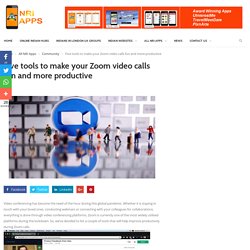 Whether it is staying in touch with your loved ones, conducting webinars or connecting with your colleagues for collaborations, everything is done through video conferencing platforms. Zoom is currently one of the most widely utilised platforms during the lockdown. So, we’ve decided to list a couple of tools that will help improve productivity during Zoom calls. 72% Indians working from home do not want to risk returning to workplace : Survey. Nearly 3 out of 4 Indian employees (72%) currently working from home due to COVID-19 do not want to risk returning to their workplace due to concerns around commuting safely to work, according to a global survey by Kronos, a leading provider of workforce management and human capital management cloud solutions. 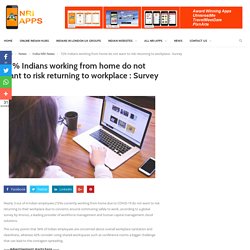 The survey points that 56% of Indian employees are concerned about overall workplace sanitation and cleanliness, whereas 42% consider using shared workspaces such as conference rooms a bigger challenge that can lead to the contagion spreading. Hacked PM Modi's Twitter account to make a point on PayTM Mall breach: Hackers. A Twitter account linked to Prime Minister Narendra Modi’s personal website was purportedly compromised early on Thursday, with a series of tweets sent out by an individual or a group identifying themselves as ‘John Wick’ who later told HT that the hack was meant to clear their name in a separate breach involving a popular e-commerce website. 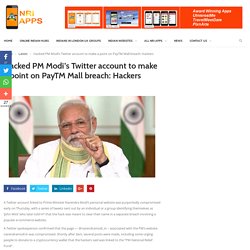 A Twitter spokesperson confirmed that the page — @narendramodi_in – associated with the PM’s website narendramodi.in was compromised. Sharp Rise in Indian Immigration to Canada in 2016-2019. In 2016, 39,340 Indians gained permanent Candian residency. By 2019, that number grew up to 80,685.which, according to a National Foundation of American Policy (NFAP), analysis of Immigration, Refugees, and Citizenship Canada data, is a 105% rise.According to the situation, Indian scientists and engineers are more likely to find Canada a better alternative to reside, raise family, and make an income in. Due to the stringent and inhibitory immigration policies under Donald Trump and the hurdles of obtaining a green card in the United States of America, Indians have resorted to Canada as America’s best alternative to gain permanent residence.

The number of Indians who have obtained Canadian residency since 2016 has more than doubled. INDIANS HAVE NOW BECOME UK'S BIGGEST OVERSEAS BORN POPULATION. Visas Granted To Indian Students To Study In UK More Than Doubles. Visas granted to Indian nationals to study at universities in the UK have more than doubled over the past year, according to official statistics released on Thursday. The Office for National Statistics (ONS) found that Indian nationals accounted for 17 per cent of the total 299,023 sponsored study visas granted by the UK Home Office in the year ending March 2020, with the number more than doubling from 2019 to hit a total of 49,844 grants – a continuous rise since 2016.

Trump campaign releases first commercial featuring PM Modi to woo Indian-American voters. Aiming to woo the influential Indian-American voters numbering over 2 million, the Trump campaign has released its first video commercial that has short clips from Prime Minister Narendra Modi’s speeches and US President Donald Trump’s historic address in Ahmedabad. Modi and Trump addressed a huge crowd in Ahmedabad during the US president’s visit to India in February this year. Trump was also accompanied by his wife Melania, daughter Ivanka, son-in-law Jared Kushner and top brass of his administration on his trip to India.

The UK’s state-funded National Health Service (NHS) on Friday issued an urgent call for people of Indian and South Asian heritage who have recovered from COVID-19 to donate their plasma to help save lives of others infected with the deadly virus. ——Advertisement starts here —— NRIfriends.net – World’s #1 NRI Friend Finder App, Find a NRI friend NEAR you, using hobby tags like #Cricket, #Badminton, #TeenPatti, #Carom. Find Desi Bollywood, Diwali, Holi Events local to you. Download from NRIApps.com. The story of one man's efforts to bring Indian-American dreams and hopes to life. JJ Singh had been a member of the India League for America for merely two years, but he was already tired. Its 12 members had a penchant for discoursing about Indian philosophy and lofty literature, when the need of the hour, according to Singh, was for “politics and propaganda”. Unable to contain his exasperation, Singh decided to take charge.

In December 1941, in a silent, near-sensational coup, he was elected the president of the India League for America, a New York-based organisation that informally spoke for India and Indians living in the United States. Over the following months and years, Singh assiduously turned the League around. Under his leadership, it became increasingly vocal and its membership grew, while Singh himself became a spokesperson for the nearly 4,000 Indians in the US. One cause Singh championed was citizenship rights for Indians.

Still, Singh played a critical role in articulating the interests of India and Indians in the US. Campaigns of the 1940s. Indians, Ethnic Minorities In UK Asked To Register For COVID-19 Vaccine Trials. Indians can now fly to Germany, USA, and France on any visa. New guidelines have been issued for Indian travellers flying abroad. Now that India has introduced air bubbles with other countries such as Germany, the USA and France, there are new visa rules for travellers. Indian nationals flying abroad can do so on any type of visa, as per a tweet by the aviation ministry. 21 Indian startups are 'unicorns' valued over $1B, just a tenth of China's: Study. India is home to 21 unicorns, or startups with over $1 billion in valuation each, and 40 more of such companies have been founded overseas by people of Indian origin, a report said on Tuesday.

Amid talk of regulating investments from the northern neighbour, the study found that three Chinese investors have backed 11 of the Indian unicorns. 'Sold-out': Tickets for India-Australia repatriation flights snapped in minutes leaving hundreds in despair. After days of anxiety, hundreds of Australian citizens and permanent residents stranded in India were given a chance to return home on two Air India flights. But all their hopes were dashed when the tickets were snapped within minutes after bookings opened earlier today.

On Tuesday, Air India announced it will operate two flights between New Delhi and Adelaide on August 3 and 6, as part of phase 5 of the Indian government’s Vande Bharat Mission. Dubai Starts Issuing Visit Visa To Indians and Other Nationalities. New Education Policy 2020 is Announced by Government of India. 1. 10+2 board structure is dropped 2. New school structure will be 5+3+3+4 3. Best Useful Mobile Apps For An NRI. Download Popular NRI Indians Apps.