10 Hands-On Strategies for Teaching Area and Perimeter. Every year, many of my students seem to have difficulty grasping the idea of perimeter and area. 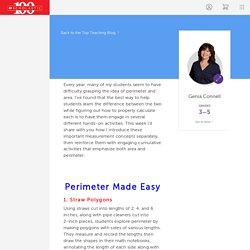 I’ve found that the best way to help students learn the difference between the two while figuring out how to properly calculate each is to have them engage in several different hands-on activities. This week I’ll share with you how I introduce these important measurement concepts separately, then reinforce them with engaging cumulative activities that emphasize both area and perimeter.

Perimeter Made Easy 1. Straw Polygons Using straws cut into lengths of 2, 4, and 6 inches, along with pipe cleaners cut into 2-inch pieces, students explore perimeter by making polygons with sides of various lengths. 2. In this follow-up activity, students use rubber bands on geoboards to create shapes with different perimeters that I have written on the board. 3.

While my students are out of the room, I use tape to craft seven large polygons. 4. In the book Spaghetti and Meatballs for All! Introduce Area 5. 6. Analyzing Student Misconceptions With Proportional Relationships. Common core State Standards Math: Math Practice: Mathematical Practice Standards MP1: Make sense of problems and persevere in solving them.Mathematically proficient students start by explaining to themselves the meaning of a problem and looking for entry points to its solution. They analyze givens, constraints, relationships, and goals. They make conjectures about the form and meaning of the solution and plan a solution pathway rather than simply jumping into a solution attempt. They consider analogous problems, and try special cases and simpler forms of the original problem in order to gain insight into its solution. 8 Common Core Math Standards, Explained [+ Examples]

The dust has finally settled, and it looks like Common Core math is here to stay. After countless political battles (and more than one Common Core math meme floating around social media), the initiative that incorporates techniques like cooperative learning and active learning has settled into the American education system. Prodigy offers no cost, Common Core-aligned math practice that your students will love. Start today! Beginning in 2010, the Common Core State Standards Initiative (CCSSI) aimed to change the way American students were taught English language arts and mathematics by countering low test scores, inconsistent learning standards and a curriculum that was a “mile wide and an inch deep.” Of the 45 states (plus the District of Columbia and the Department of Defense Education Activity) that fully implemented Common Core by 2015, 24 chose to revise some aspects of the program but still remain aligned with the original standards today. How to Understand Common Core’s Math Methods. 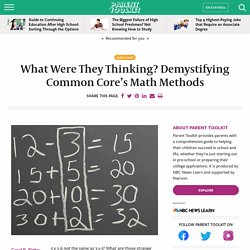 Rinke;John F. McAdamMay 9, 2016 5 x 3 is not the same as 3 x 5? What are those strange arrays? The Internet is ablaze with criticism about the Common Core’s “cruel and unusual” new methods for teaching math. Common Core math starts with an important underlying assumption: Numbers can be used more flexibly when they are taken apart and put back together. A second fundamental principle of Common Core math involves using physical manipulatives as well as pictures to help children visualize numbers and the relationships among numbers. . These fundamental concepts of composing and decomposing numbers, along with the process of visualizing numbers, are taught to young children and carry through Common Core math during their school years. 1.Introducing Numbers with Ten Frames When introducing numbers, the Common Core encourages children to compose and decompose them in a variety of ways. 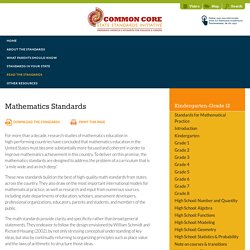 To deliver on this promise, the mathematics standards are designed to address the problem of a curriculum that is “a mile wide and an inch deep.” These new standards build on the best of high-quality math standards from states across the country. They also draw on the most important international models for mathematical practice, as well as research and input from numerous sources, including state departments of education, scholars, assessment developers, professional organizations, educators, parents and students, and members of the public.

The math standards provide clarity and specificity rather than broad general statements.