The Rose of Jericho - kaydeefalls - Torchwood, Doctor Who (2005) Catch my breath. Don't ever ask me if I'm sorry Or that I'm here with you Baby you can bet I don't regret the girls I never knew Every day's another first Another change for me To fall in love with you And I do "Jack, if Gwen hadn't of married Rhys, would you be here right now? 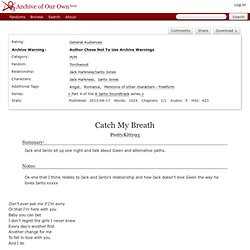 " "Ianto, what do you mean? " "If Gwen and Rhys weren't married would you be with her or would you have still chosen me? " Avengers xover. A Good Many Family Trees Are Shady - blackkat - Torchwood, Sherlock. There's a large black car waiting outside when Ianto wakes up. 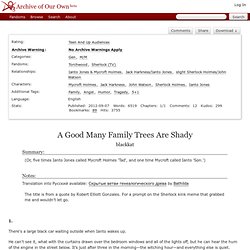 He can't see it, what with the curtains drawn over the bedroom windows and all of the lights off, but he can hear the hum of the engine in the street below. It’s just after three in the morning—the witching hour—and everything else is quiet. Then, as though aware of his attention—which Ianto really wouldn't put past the caller—his phone vibrates once, again, a third time, and then falls silent. For the first time in his life, Ianto considers not answering that particular signal. Partners and parents. Title: Partners and ParentsAuthor: ceefax_the_saneRating: 12Pairing: Jack/IantoWarnings: Swearing and a wee bit of violence.Word count: 9500Summary: Way back in the mists of time, when dinosaurs roamed the earth, Tony Blair was prime minister, and series two had yet to begin filming, clarity_lore posted this. 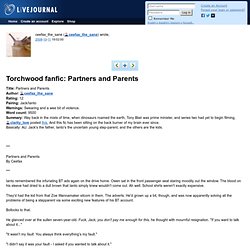 And this fic has been sitting on the back burner of my brain ever since.Basically: AU. Jack's the father, Ianto's the uncertain young step-parent, and the others are the kids. Partners and ParentsBy Ceefax Ianto remembered the infuriating BT ads again on the drive home. They'd had the kid from that Zoe Wannamaker sitcom in them. Domestic animals. Torchwood gets a new pet.Nothing in particular. 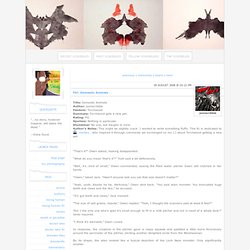 No one, but Vaughn is mine. This might be slightly crack. Rhino. Title: They Grip the GroundAuthor: giddygeekPairing: Jack/Ianto, vaguely. 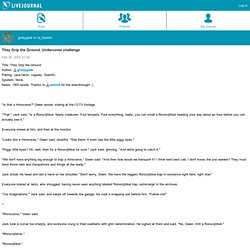 Teamfic.Spoilers: None.Notes: 1800 words. Thanks to astolat for the read-through! :) Beta-reading. There've been some complaints on my flist lately about the quality of writing in fanfiction. 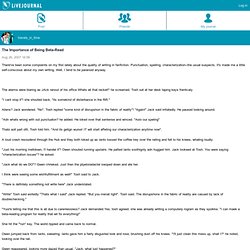 Punctuation, spelling, characterization--the usual suspects. It's made me a little self-conscious about my own writing. Well, I tend to be paranoid anyway. The alarms were blaring as JAck ranout of his office Whats all that racket! " he screamed. "I cant stop it"! Aliens? "Adn whats wrong with out punctuaton? Thats aoll part ofit, Tosh told him. A loud crash resoudend through the Hub and they both loked up as Ianto tossed the coffee trey over the railing and fell to his knees, whaling loudly. Dogs and cats. Title: Of Cats, Rats and Men.Author: ceefax_the_saneRating: 18Pairing: Ianto/JackWarning: Mansex.Word count: 3100Summary: An accident with an alien device has transformed Owen and Jack into animals. 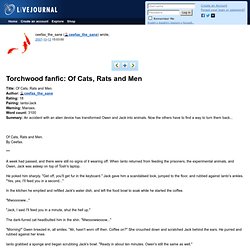 Now the others have to find a way to turn them back... Of Cats, Rats and Men.By Ceefax. A week had passed, and there were still no signs of it wearing off. Child, the darkness will rise from the deep. Five times Death stopped for Jack (and once he didn't) - kaydeefalls - Torchwood, Doctor Who (2005) Because I could not stop for Death,He kindly stopped for me. i. mauled by Weevil Weevils again. 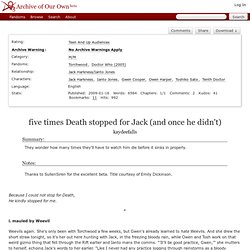 She's only been with Torchwood a few weeks, but Gwen's already learned to hate Weevils. And she drew the short straw tonight, so it's her out here hunting with Jack, in the freezing bloody rain, while Owen and Tosh work on that weird gizmo thing that fell through the Rift earlier and Ianto mans the comms. Countrycide. Alphabet. For once in my life, I've completed a challenge! 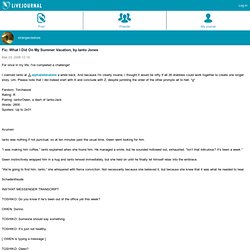 I claimed Ianto at alphabetdrabble a while back. And because I'm clearly insane, I thought it would be nifty if all 26 drabbles could work together to create one longer story. Um. Please note that I did indeed start with A and conclude with Z, despite jumbling the order of the other prompts all to hell. *g* Pride. Title: Collective Noun: Pride Author: Miss Winterhill Challenge: Pride Rating: PG-13 (angst and slashy situations) 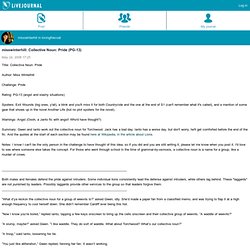 Mourning. I really meant to post this sooner, but I guess I got distracted by something shiny. I'm insanely proud of this little thing. Title: Peace Attend (Our Weak Light Together)Pairing/Characters: Gwen, Jack/IantoWords: ~1800Rating: PG (if that)Spoilers: Exit WoundsSummary: They're what she needs right now.Betas: Whipped into shape by the9thdoctor and rojodiablo. Any remaining faults are mine alone.Disclaimer: Last I checked, my name wasn't Russell, nor was I a British television network.Notes: Title from translations of Ar Hyd Y Nos (All Through the Night), which got serendipitously stuck in my head. All feedback welcome. Peace Attend (Our Weak Light Together) A week since it all fell apart, and Gwen's staring at the ceiling, watching the cracked patterns thrown by the streetlights as tree branches wave in the wind outside. Dealing. Forgotten. Title: Forgotten (1/1)Author: fajrdrakoFandom: TorchwoodCharacters: Jack, Adam, the Torchwood team (with references to Jack/Ianto)Rating: PGDisclaimer: Not mine, no claims, all property of the BBC.Warnings: Spoilers for the Torchwood episode 2x05 "Adam" and 2x12 "Fragments".

Notes:2,827 words. Last one out. The years pass with Owen watching. No one, other than the two OCs, belongs to me. It was supposed to be small, but it just grew and grew. Like a Chia Pet. Having recognized and accepted his permanent state of being undead, it dawned on Owen early on that eventually, it would just be him and Jack. It might take years, several possibly. The first is Gwen. Rec_room: A Primer for Reading Torchwood Fanfic by cupidsbow. A Primer for Reading Torchwood Fanfic(when you haven't seen a single episode of the show) I'm still a shiny new n00b in this fandom, as I really only started reading it in any consistent way in December 08. That means my guided tour is necessarily focused on the parts of the fandom I’ve found so far. Normally, in a primer like this, I’d try to include some recs of good gen stories which feature the team doing their thing, so that readers can get a sense for the dynamics of the show.

However, I don’t yet have enough stories of that nature in my bookmarks. As a result, this is really more of an introduction to Jack/Ianto than the fandom as a whole. 4661. Title: More Richer than my Tongue – Chapter 1Rating: This section PG-13, spots of NC-17 later on.Pairing: Jack/IantoNotes, credits: Huge thanks to my betas invisible_lift, who saved me from my punctuation tics and helped untangle my POV furball, and blackbird_song, who fussed over my show vs. tell balance and also worked on the furball.

That POV thing is a bitch. Much love also to definehome who coached me through the trouble spots when it all stopped seeming worthwhile to me. Copperbadge. All The Things I've Lost And Found - Chapter 1 - copperbadge - Torchwood. Chapter Text. Dresser. Ignition - copperbadge - Torchwood. After the cannibals, Gwen and Ianto went a little funny in the head for a day or two. Torchwood USA - copperbadge - Doctor Who, Torchwood. Pocky_slash. In Love, But Not At Peace - pocky_slash - Torchwood. Cause you know life is hard, but now you also know your mind, So now you're going out to love, but on your own side this time Where you still think of famine, and you'll still dig up train fare And you won't mind the wrinkles cause you'll know how they got there In love but not at peace --"In Love, But Not At Peace," Dar Williams.