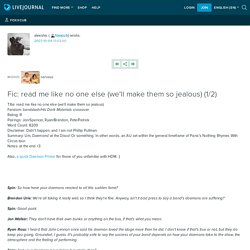 At the Disco! Or something. In other words, an AU set within the general timeframe of Panic's Nothing Rhymes With Circus tour.Notes: at the end <3. RE-UPLOAD: Second Sight, Part 1/3: zarah5. (Re-uploaded because of hackers who can't keep their dirty paws to themselves. 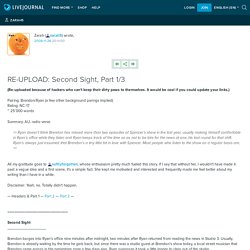 It would be cool if you could update your links.) Pairing: Brendon/Ryan (a few other background parings implied) Rating: NC-17 ~ 25’000 words Summary: AU, radio verse. >> Ryan doesn’t think Brendon has missed more than two episodes of Spencer’s show in the last year, usually making himself comfortable in Ryan’s office while they listen and Ryan keeps track of the time so as not to be late for the news at one, his last round for that shift. Ryan’s always just assumed that Brendon’s a tiny little bit in love with Spencer. RE-UPLOAD: Catching Airplanes: zarah5. (Re-uploaded because of hackers who can't keep their dirty paws to themselves. 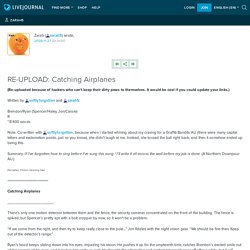 It would be cool if you could update your links.) Written by softlyforgotten and zarah5. Patrickxpeter: [pxp ficathon] homesick. Slowfaintly: [fic] origin; pete/patrick, g. Title: Origin (1/2)pairing: Pete Wentz/Patrick Stump (FOB)rating: Ggenre: lakesides & rooftopssummary: Pete Wentz has got the basics of superhero-dom down – he’s a master of day-saving, of keeping his real life and his hero life separate, and his powers are pretty much bad-ass. 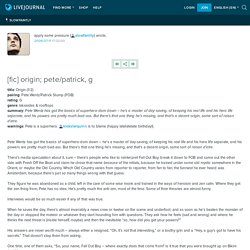 I Don't Know How You're Supposed to Find Me Lately (But Keep Thinking Of Me, I'll Find You First) - megyal - Fall Out Boy [Archive of Our Own] Doug drawls, "It's like a vitamin boost for your brainwaves, think about it like that," and Patrick looks at him askance. 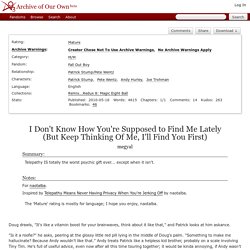 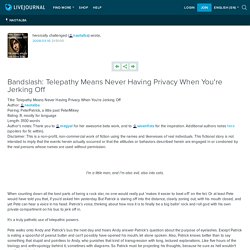 Additional authors notes here (spoilers for fic within).Disclaimer: This is a non-profit, non-commercial work of fiction using the names and likenesses of real individuals. This fictional story is not intended to imply that the events herein actually occurred or that the attitudes or behaviors described herein are engaged in or condoned by the real persons whose names are used without permission. FIC: "it means rocket hips" 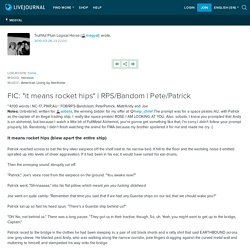 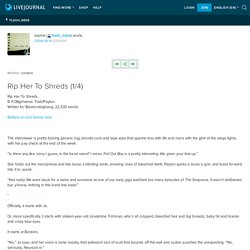 R. FOBgirlverse. Trish/Peyton.Written for Bandombigbang. 22,533 words. Brilliant art and fanmix here. The interviewer is pretty fucking generic; big, blonde curls and blue eyes that sparkle less with life and more with the glint of the stage lights, with her pay check at the end of the week. “Is there any like, irony I guess, in the band name? She holds out the microphone and lets loose a blinding smile, showing rows of bleached teeth. 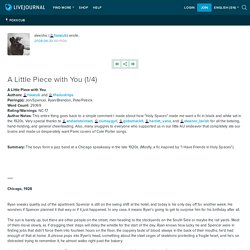 FIC: "a madness shared by many" ~2,800 words | AU | PG/Mild | FOB/RPS-Bandslash; Pairings: Pete/Patrick, Andy/MattNotes: Very loosely based on a movie called "Carry On Loving"; in fact, I didn't even watch the movie, that's how loose it is. 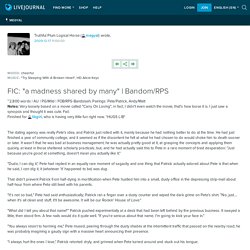 I just saw a synopsis and thought it was cute. Fail.Finished for libgirl, who is having very little fun right now. *HUGS LIB* The dating agency was really Pete's idea, and Patrick just rolled with it, mainly because he had nothing better to do at the time. "Dude, I can dig it," Pete had replied in an equally rare moment of sagacity and one thing that Patrick actually adored about Pete is that when he said, I can dig it, it (whatever 'it' happened to be) was dug. That didn't prevent Patrick from half-dying in mortification when Pete hustled him into a small, dusty office in the depressing strip-mall about half-hour from where Pete still lived with his parents. FIC: "Anything you want to hear" PG | angst-ish | 1300 wordsSummary: It is, obviously, Pete's mission in life to say the most flattering things he can about Patrick.An early gift for ohfreckle, based on a comment to this entry. I didn't mean for it to turn out like this, honest!

It's something that Patrick got used to over the years, the way he got accustomed to moving from plane to bus to hotel rooms, living in a manner that was overwhelmingly glamorous and breathtakingly tedious at the same time. He learned to absorb Pete's teasing compliments in the same way he consumed all of Pete's words, with careful consideration the majority of times and bewilderment on quite a few occasions. Larger Near the Horizon; FOB/Band slash; Pete/Patrick. Fic for the darling libgirl. I've also used a spittingink prompt of 'moon'; ~2, 400 words. A short history of nearly nothing - "I Want Your Body" (16candles! Pete/Patrick) I Want Your Body (To Feed Off Of)Author: sharon_hateRating: PG-13Disclaimer: The following events are entirely fictional.Notes: A lot of purposely cliche elements here, so don't get huffy. Title based on the Samantha Fox song, "Touch Me (I Want Your Body)". Summary:Pete gets sucked into an alternate dimension where everything is a total cliché, and holy shit.

There are real fucking vampires here, dude. What the fuck. I Want Your Body (To Feed Off Of) "Are you working for Beckett? " Pete edges his way away from the brick wall, mouth hanging open and taking deep, labored breaths. Fic: A Little Less Sixteen Candles, A Little More Say Anything. For those of you who read A Little More Sixteen Candles, here's the sequel! A Little More Sixteen Candles. Because high school AU makes the world go 'round, and is totally a great way to introduce oneself to fandom at large. ... What? Beta'd by and dedicated to thegoldsky, who is possibly psychic. HONED HOOKER VISION - New Story: And Then the Aliens Killed Bill Murray.

This is my very, very belated Sweet Charity story for purelyironic, who has been wonderfully patient and waiting for this all year! Thank God she's on my flist and knows all about the crazy year I've been having. *g* Any Ordinary Stranger. Flash_indie: Fic: Poets Come To Life (1/3) Dig your own grave and save - Fic: "Fake Empire" (1/1) Overanalyzing the manifestations of the unconscious - fic: I Wondered When Your Countenance Would Change (From Sunshine and Vanilla to the Raven Tones of. So I wrote this, like, forever ago. At least a month, but I never posted it because I thought it was kind of self-indulgent and, in general, I don't really feel like I have a valuable contribution to make to the angstscape, so it's just been lurking in my gmail account, waiting to rear its ugly head and call me names.