The North, Strong and Free

B.C. gives Taseko mine a second chance after letter to Christy Clark - The Globe and Mail. A proposed $1.5-billion gold and copper mine twice rejected by the federal government was given a new lease on life by B.C. after the company sent a bluntly worded letter to Premier Christy Clark threatening legal action. 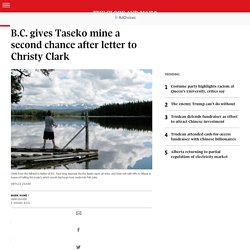 Russell Hallbauer, president and chief executive officer of Taseko Mines Ltd., wrote to Ms. Clark on May 13, 2016, demanding the B.C. Environmental Assessment Office proceed with a request to amend the environmental certificate for the New Prosperity project despite Ottawa's repeated rejections. Story continues below advertisement Amending the certificate would allow Taseko to pursue the project through a narrow process that requires a review of proposed changes only, and not another full environmental assessment. 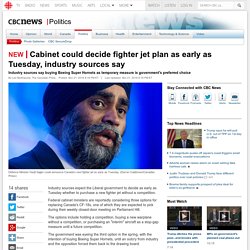 Federal cabinet ministers are reportedly considering three options for replacing Canada's CF-18s, one of which they are expected to pick during their weekly closed-door meeting on Parliament Hill. The options include holding a competition, buying a new warplane without a competition, or purchasing an "interim" aircraft as a stop-gap measure until a future competition. The government was eyeing the third option in the spring, with the intention of buying Boeing Super Hornets, until an outcry from industry and the opposition forced them back to the drawing board. But while Defence Minister Harjit Sajjan held consultations with different industry players in the summer, industry sources say the interim option is back as the preferred choice.

How B.C. Quietly Accepted the Harper-Era Federal Review of Kinder Morgan Pipeline. The B.C. government has refused to exercise its authority to order a provincial environmental assessment of the Kinder Morgan Trans Mountain pipeline and tanker project, instead opting to rely on a report produced by the federal National Energy Board (NEB) that recommended approval of the project. 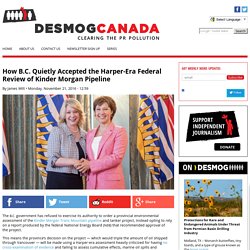 This means the province’s decision on the project — which would triple the amount of oil shipped through Vancouver — will be made using a Harper-era assessment heavily criticized for having no cross-examination of evidence and failing to assess cumulative effects, marine oil spills and greenhouse gas emissions. “This is a government that say they’re standing up for British Columbians and when they had a chance legally to protect British Columbians with a made-in-B.C. environmental assessment they passed the buck, accepted Stephen Harper’s process and let down British Columbians,” said George Heyman, the NDP’s environment critic. In May, B.C. Supreme Court Ruled B.C. Trudeau government asks Charlie Angus to wait 960 days for records on controversial hydro project. Canada's Justice Department has asked an elected federal politician to wait up to 960 days before it gives him information about the decision to grant permits for a controversial British Columbia hydroelectric project. 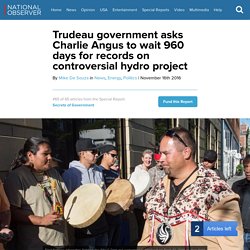 The multibillion dollar Site C dam would create an 83-kilometre long reservoir on the Peace River, flooding farmland along with traditional First Nations territory, affecting hunting, fishing and trapping rights. The BC government supports Site C, but some of the project’s detractors have questioned whether the development makes economic sense. Two First Nations — Prophet River and West Moberly — have challenged Site C in Federal Court, arguing that the development violates their treaty rights, protected under the constitution. New Democratic Party MP Charlie Angus told National Observer in an interview that he believes the government has a duty to release all information about those permits, including potential implications for treaty rights. 'We've always been seen as a threat,' says former N.W.T. premier of RCMP surveillance revelations - North.

A recently revealed program of police surveillance across Canada is "alarming" and a "threat to our own security," says former Northwest Territories premier Stephen Kakfwi. 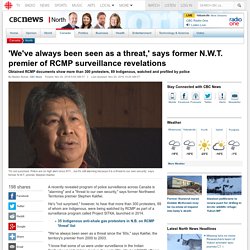 He's "not surprised," however, to hear that more than 300 protesters, 89 of whom are Indigenous, were being watched by RCMP as part of a surveillance program called Project SITKA, launched in 2014. 35 Indigenous anti-shale gas protesters in N.B. on RCMP 'threat' list "We've always been seen as a threat since the '60s," says Kakfwi, the territory's premier from 2000 to 2003. "I know that some of us were under surveillance in the Indian Brotherhood at that time, back in the early '70s. We had RCMP officers approaching us, talking to us. Reporter's notebook: Standing Rock is not the new Woodstock - Indigenous - CBC. Thousands of protesters are camped out near Standing Rock Sioux Reservation, N.D., just south of where the Dakota Access pipeline is under construction and slated to cross the Missouri River. 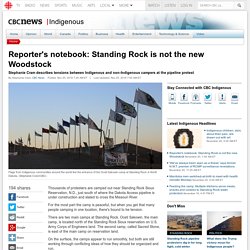 For the most part the camp is peaceful, but when you get that many people camping in one location, there's bound to be tension. There are two main camps at Standing Rock. Oceti Sakowin, the main camp, is located north of the Standing Rock Sioux reservation on U.S. Army Corps of Engineers land. The second camp, called Sacred Stone, is east of the main camp on reservation land.

Why won't Minister Joly and Minister Bains take the Internet tax off the table? This week, I had a chance to observe firsthand how federal Ministers Mélanie Joly and Navdeep Bains are responding to rumours of the "Internet tax" that have taken our corner of the digital rights world by storm. 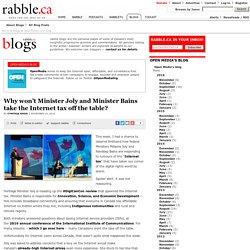 Spoiler alert: it was not reassuring. Heritage Minister Joly is heading up the #DigiCanCon review that spawned the Internet tax. Minister Bains is responsible for Innovation, Science, and Economic Development -- this includes broadband connectivity and ensuring that everyone in Canada has affordable Internet no matter where they live, including Indigenous communities and rural and remote regions. Both ministers answered questions about taxing Internet service providers (ISPs), at the 2016 annual conference of the International Institute of Communications. 10% of Homes Being Resold In Vancouver Have Never Been Lived In. Empty homes are a unique Vancouver real estate problem. 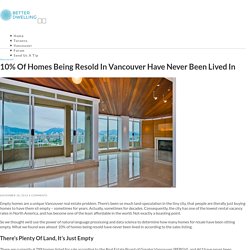 There’s been so much land speculation in the tiny city, that people are literally just buying homes to have them sit empty – sometimes for years. Actually, sometimes for decades. Consequently, the city has one of the lowest rental vacancy rates in North America, and has become one of the least affordable in the world. 'Magnitude of challenge' in 2050 climate strategy may not be fully understood by Canadians. The federal government has released its long-term climate strategy with a caution that most Canadians — while sympathetic to the cause — don't yet understand the "magnitude of the challenge. 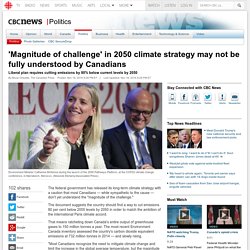 " The document suggests the country should find a way to cut emissions 80 per cent below 2005 levels by 2050 in order to match the ambition of the international Paris climate accord. That means ratcheting down Canada's entire output of greenhouse gases to 150 million tonnes a year. The most recent Environment Canada inventory assessed the country's carbon dioxide equivalent emissions at 732 million tonnes in 2014 — and slowly rising. "Most Canadians recognize the need to mitigate climate change and limit the increase in the global average temperature, but the magnitude of the challenge is less well understood, with a requirement for very deep emissions cuts from every sector by mid-century," says the 87-page plan, released Friday at an international climate conference in Morocco.

Silence on Site C a disgraceful double standard. Many of you have asked me to respond to Senator Richard Neufeld’s recent op-ed, which complained about the “double standard” shown by the lack of media coverage of one of my Facebook posts about the Site C dam. 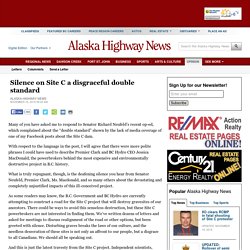 With respect to the language in the post, I will agree that there were more polite phrases I could have used to describe Premier Clark and BC Hydro CEO Jessica MacDonald, the powerbrokers behind the most expensive and environmentally destructive project in B.C. history. What is truly repugnant, though, is the deafening silence you hear from Senator Neufeld, Premier Clark, Ms. Sudden rise in interest rates could cause home prices to drop 30 per cent: CMHC. Parents of Fouad Nayel join protest outside Ottawa courthouse after murder trial halted - Ottawa. The parents of a man killed in 2012 joined a protest at the Ottawa courthouse Thursday morning over a judge's decision earlier this week to stay a first-degree murder charge because of delays in bringing the case to trial. Canada Fought to Include Indigenous Rights in the Paris Agreement, But Will Those Rights Be Protected Back Home? “If you were to get lost in the bush, I could find you.”

It’s an oddly placed sentiment in the city heat of Marrakech, Morocco, yet an entirely appropriate one for an indigenous panel at the UN climate talks hosted by Canada’s Minister of Environment and Climate Change, Catherine McKenna. Francois Paulette, revered Canadian indigenous leader and elder from the Dene Nation, told an international crowd of delegates, campaigners and press that back in Canada, his place is in the wild. It is there Paulette learned from his elders the meaning of sin: “The biggest sin a man can make is to abuse the earth.” Canada’s Climate Action Called ‘Inadequate’ at UN Climate Talks in Marrakech. Last year the Canadian government enjoyed a positive reception at the UN climate talks in Paris.

After 10 years of climate inaction under a Conservative government, the international community anticipated the new Liberal government would mean good things for the nation’s climate governance. But Canada’s contribution to the world’s first climate treaty remains “inadequate” according to a new report released by the Carbon Action Tracker in light of the climate talks. The Paris Agreement, designed to limit global warming to as close to 1.5 degrees Celsius as possible, was signed in France last year and ratified, with incredible speed, less than one year later on November 4. Although a proud signatory of the agreement, Canada will not meet its climate targets, according to the new analysis. Prime Minister Justin Trudeau adopted the same climate targets as the previous Stephen Harper government, pledging to reduce Canada’s emissions 30 per cent below 2005 levels by 2030. Seventy per cent of British Columbians Support Pausing Site C Construction to Investigate Alternatives.

Nine-in-ten residents favour investing in energy efficiency measures and adding more wind, solar and geothermal power to the grid. Vancouver, BC — British Columbians want BC Hydro’s Site C dam sent for an independent review and support stopping construction on the project while alternatives are investigated, a new poll by Insights West has found. It found that 73 per cent of British Columbians support sending the Site C dam for an independent review of both costs and demand, as recommended by the Joint Review Panel in its 2014 report. That includes 63 per cent of BC Liberal voters in 2013 and 83 per cent of those who last voted for the BC New Democratic Party (NDP). In addition, 70 per cent of respondents supported pausing construction of Site C to investigate alternatives to meet future power demand. “When pondering Site C, British Columbians are favouring caution and not hubris,” said Mario Canseco, Vice President of Public Affairs at Insights West.

Liberals kill NDP motion for committee to study arms exports, including $15-billion Saudi LAV deal. U.S. is only 15th most free country in the world, study says. Why is the US Big Pharma lobby sponsoring a conference on the future of healthcare in Canada? B.C. municipalities support push to save old growth forests. Site C dam opponents could be bringing in their last harvest. In September, Did the Liberals Out-Harper the Conservatives?