This nasty oil rivalry is why a genuine output freeze is a long shot. Investors awaiting Sunday’s meeting of major oil producers in Doha are eyeing signs of a pact that could freeze oil production in a bid to stabilize prices. 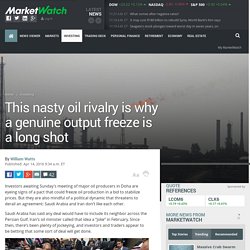 But they are also mindful of a political dynamic that threatens to derail an agreement: Saudi Arabia and Iran don’t like each other. Saudi Arabia has said any deal would have to include its neighbor across the Persian Gulf. Iran’s oil minister called that idea a “joke” in February. Since then, there’s been plenty of jockeying, and investors and traders appear to be betting that some sort of deal will get done. AFP/Getty Images But many observers it will have to happen without Iran, which aims to boost output as world powers lift sanctions that have curtailed its oil exports and crippled its economy for years. 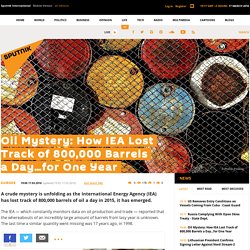 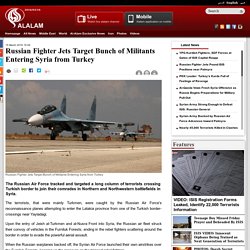 The terrorists, that were mainly Turkmen, were caught by the Russian Air Force’s reconnaissance planes attempting to enter the Latakia province from one of the Turkish border-crossings near Yayladagi. Upon the entry of Jeish al-Turkmen and al-Nusra Front into Syria, the Russian air fleet struck their convoy of vehicles in the Furniluk Forests, ending in the rebel fighters scattering around the border in order to evade the powerful aerial assault.

When the Russian warplanes backed off, the Syrian Air Force launched their own airstrikes over the Furniluk Forests, keeping up the pressure on the trapped rebel fighters. Wars are being fought as in 'barbarian times', warns MSF chief. Attacks against civilians in war zones across the world have grown more indiscriminate due to a myopic focus by the major global powers on fighting terrorism, the head of the international charity Médecins Sans Frontières has said. 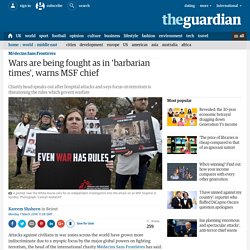 In an interview with the Guardian, Joanne Liu, the Canadian physician and president of MSF, issued a broad indictment of how modern warfare is conducted, declaring that world powers have failed in their duty to uphold the rules of conflict, threatening a return to “barbarian times”. “We are in a completely different way of rules of engagement in conflicts,” she said during a visit to Beirut. “I still believe that what the Geneva convention and international humanitarian law brought to conflict was to mitigate war on civilians, and by not respecting that we are going backwards a hundred years.

It’s barbarian times. In Hussein's Footsteps? Erdogan is Walking Straight Into Washington's Trap. Politics Get short URL On February 19 Washington dismissed a draft resolution by Russia aimed at preventing a Turkish invasion of Syria at the United Nations Security Council (UNSC); by making move the Obama administration is in fact giving the green light to Ankara's ground operation in Syria, US independent journalist Mike Whitney believes. 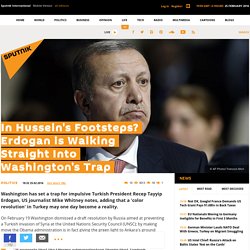 News360. The Dirty War on Syria: New E-Book by Prof. Tim Anderson. No other text brings together all the major accusations and their effective refutation. 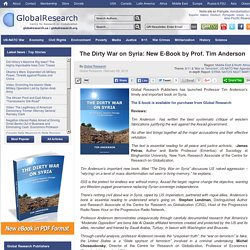 This text is essential reading for all peace and justice activists. Obama Eager to Slow Russian Campaign in Syria 'By Any Means Possible' Politics. 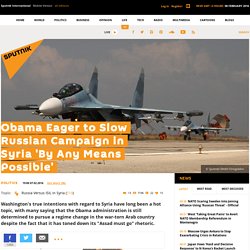 What’s Really Going on with Oil? If there is any single price of any commodity that determines the growth or slowdown of our economy, it is the price of crude oil. 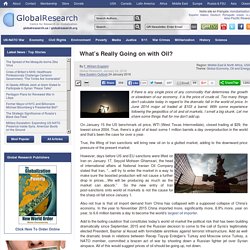 Too many things don’t calculate today in regard to the dramatic fall in the world oil price. In June 2014 major oil traded at $103 a barrel. Russia steals Saudi's crown as China’s top oil supplier — RT Business. Moscow is gaining momentum as the biggest seller of crude oil to China, with Russian crude supplies overtaking those from Saudi Arabia. 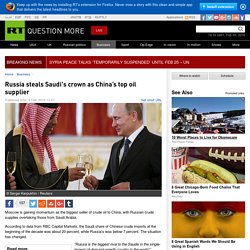 According to data from RBC Capital Markets, the Saudi share of Chinese crude imports at the beginning of the decade was about 20 percent, while Russia's was below 7 percent. The situation has changed. Read more "Russia is the biggest rival to the Saudis in the single-largest oil demand growth country in the world," Michael Tran, RBC Capital Markets' commodity strategist told Business Insider. Dead on Target: Unknown Sniper Taking Down Daesh Commanders in Libya. 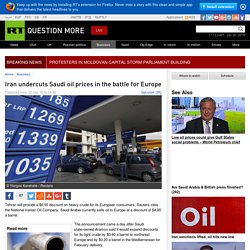 Saudi Arabia currently sells oil to Europe at a discount of $4.85 a barrel. Read more The announcement came a day after Saudi state-owned Aramco said it would expand discounts for its light crude by $0.60 a barrel to northwest Europe and by $0.20 a barrel in the Mediterranean for February delivery. The rebate on Iran’s light crude matches Saudi’s February official selling price for oil to northwest Europe. Iran is planning more price cuts to Europe next month in line with similar reductions by Saudi Arabia, and is willing to compete with its major rival without making deep discounts, reports the Wall Street Journal. READ MORE: Oil falls below $28 per barrel as Iran sanctions lifted Iran returned to the global markets for the first time in four decades after sanctions against the country were lifted on Saturday. ISIS massacres 280 civilians for ‘cooperation with the Syrian army’ – reports.

Islamic State jihadists have reportedly slaughtered up to 280 people in the Deir ez-Zor province, killing “whole families” for alleged cooperation with the Syrian troops. The killings are said to have taken place a day after Russian humanitarian aid was airdropped in the region. Local residents told Sputnik news agency the massacre happened in al-Bagilya settlement, an area which received Russian airlifted aid earlier. “The horrific massacre carried out today by ISIL militants in al-Bagilya in Deir ez-Zor. 280 victims, including women, children and old people. Reason – cooperation with the Syrian army,” a Sputnik source said. Uk.businessinsider. Here We Go Again: Western Powers Preparing for New Invasion of Libya? Politics Get short URL A report released by the United Nations in early December 2015 warned about Daesh beefing up its military presence in Libya; indeed, the northern African state is strategically important to Islamists due to its geographical location at the crossroads between the Middle East, Africa and Europe.

The report cited Abu al-Mughirah Al Qahtani, the so-called "delegate leader" of Daesh's Libyan Wilayat, who said that "Libya has a great importance because it is in Africa and south of Europe. It also contains a well of resources that cannot dry. […] It is also a gate to the African desert stretching to a number of African countries. " French Delegation Visits East Ukraine, Talks About Horrors of War. Europe Get short URL The residents of Donbass aren't living, they're simply trying to survive, Clostermann told Sputnik. The delegation of French human rights activists consisted of Jacques Clostermann, the leader of the human rights organization My Country France and two human rights lawyers, Josy-Jean Bousquet and Hanen Maksud, according to Novorossia Today News Agency.

Surgical airstrikes by Russian fighter jets have knocked out a number of Islamic State installations in Syria, including the battle headquarters of a jihadist group near Raqqa, according to the Russian Defense Ministry. ​International violation? US Army considering hollow point bullets for pistols — RT USA. US To Begin the Invasion of Syria. Washington Policymakers Call for the Division, Destruction and Military Occupation of Syria. 'If Syria's Assad falls, jihadists would fill the void' — RT Op-Edge. Published time: July 07, 2015 14:06 U.S. President Barack Obama (C) sits down to a meeting with Defense Secretary Ash Carter (L) and Chairman of the Joint Chiefs of Staff U.S. Bin Laden’s son asked US for father’s death certificate – WikiLeaks — RT USA. Published time: June 20, 2015 14:37 Osama bin-Laden. Global Terrorism Database.

Saudi war crimes: Double standards and whitewashing? — RT Op-Edge. Catherine Shakdam is a political analyst, writer and commentator for the Middle East with a special focus on radical movements and Yemen. Published time: June 05, 2015 13:08. Donbass and the “Big Game”: Reformatting Ukraine is on the Agenda. “Russia will not Remain on the Sidelines”