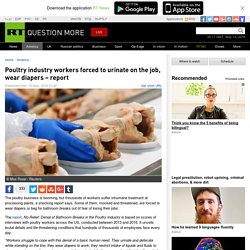 Some of them, mocked and threatened, are forced to wear diapers or beg for bathroom breaks out of fear of losing their jobs. The report, No Relief: Denial of Bathroom Breaks in the Poultry Industry is based on scores of interviews with poultry workers across the US, conducted between 2013 and 2016. It unveils brutal details and life-threatening conditions that hundreds of thousands of employees face every day.

“Workers struggle to cope with this denial of a basic human need. They urinate and defecate while standing on the line; they wear diapers to work; they restrict intake of liquids and fluids to dangerous degrees; they endure pain and discomfort while they worry about their health and job security. Oxfam America has been struggling to draw attention to labor issues in the growing US poultry industry. Read more “Our supervisor always makes fun of us. Barclays' first no deposit, 100% mortgage since financial crisis 'will help people buy property they can't afford'

Housing analysts have slammed a 100% mortgage launched by Barclays as "crackers", saying the first mortgage since the crisis not to require a deposit will help people buy property they can't afford. 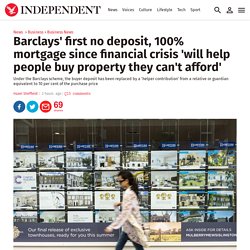 Henry Pryor, a buying agent and housing market commentator, said the mortgage, which removes the requirement for first-time buyers and home movers to provide a 5 per cent deposit, was a "financial grenade". "The premise is crackers. If this achieves the marketing hit that Barclays are after it's a risky strategy because there are enough of us who remember who got us into the septic tank of financial crisis in 2008," Pryor said. He called for the Bank of England to make use of greater powers afforded to it after the financial crisis to crack down on risky lending. Previously, a 5 per cent deposit would have been required from a buyer of a new property. Outrageous property deals in pictures Pryor said he expected other lenders to start offering similar products again. Exxon Mobil downgrade from AAA rating marks beginning of financial collapse: Keiser — RT Business.

The historic credit rating downgrade of Exxon Mobil to AA+ is an alarming sign of the US economy’s weakness, Max Keiser warns. 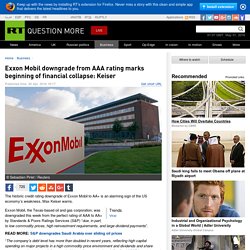 This is the first time Exxon has received a less-than perfect credit rating since the Great Depression, reports Forbes.com. Keiser said the Exxon downgrade heralded “the beginning of [a] collapse”. Many U.S. corporations pay little in federal income taxes: report.