Catching up with Professor M: Talking with Grant Morrison. If you ever felt like a misfit mutant, contacting "Professor" Grant Morrison from the "Punk School for The Gifted Brats" is bliss. 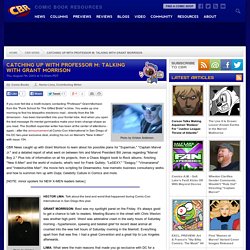 You wake up one morning to find his telepathic electronic mail - directly from the 5th dimension - has been transmitted into your frontal lobe. And when you open the text message it's mental gymnastics make your brain change shape as you read. The Scottish superstar writer has been at the center of attentions - again - after the announcement at Comic-Con International in San Diego of his DC two-year exclusive deal, ending his run on Marvel's "New X-Men" with issue 154. CBR News caught up with Grant Morrison to learn about his possible plans for "Superman," "Captain Marvel Jr. " and a detailed report of what went on between him and Marvel President Bill Jemas regarding "Marvel Boy 2.

" [NOTE: minor spoilers for NEW X-MEN readers below.] HECTOR LIMA: Talk about the best and worst that happened during Comic-Con International in San Diego this year. Up, Up and Away with Morrison, Kring, Mignola & Lethem. The New Yorker Festival was a series of events and talks put on by The New Yorker magazine last weekend. 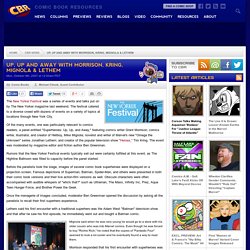 The festival catered to a diverse crowd with dozens of events on a variety of topics at locations through New York City. Of the many events, one was particularly relevant to comics readers, a panel entitled "Superheroes: Up, Up, and Away," featuring comics writer Grant Morrison; comics writer, illustrator, and creator of Hellboy, Mike Mignola; novelist and writer of Marvel's new "Omega the Unknown" series Jonathan Lethem; and creator of the popular television show "Heroes," Tim Kring. The event was moderated by magazine editor and fiction author Ben Greenman. PopImage. Before the X-Men took centre stage in Grant's portfolio, he and Chris Weston were co-creating the Vertigo maxi-series, The Filth. 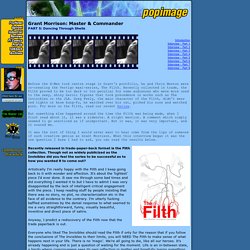 Recently collected in trade, the Filth proved to be too dark or too peculiar for some audiences who were more used to the sexy, shiny heroic figures that took precedence in works such as The Invisibles or the JLA. The rune-cross of Johannes Bureus « Gangleri – articles. Johannes Bureus, the Renaissance rune magician « Gangleri – articles. When I read about Johannes Thomae Agrivillensis Bureus (latinisation of Johan Bure, 1568-1652), for the first time I realised that in Northern Europe during the Renaissance there actually hàs been a mix between pre-Christian religion/mythology and typical Renaissance magic (such as Hermetic, Kabbalah, Medieval magic, etc.). 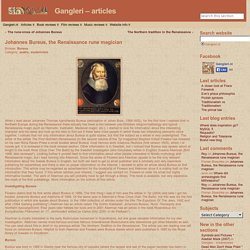 I started to look for information about this interesting character and his ideas and took up the idea to find out if there were more people in which these two interesting elements came together. I noticed that not only information about Bureus is quite scarse, but that the subject as a whole is very underlighted. The writer of the article The First Northern Renaissance (in the second volume of the Tyr magazine) Stephen Edred Flowers has released on his own Rûna Raven Press a small booklet about Bureus’ most famous work Adalruna Rediviva (first version 1605), which I of course got. It is reviewed in the book reviews section. Neil Gaiman on Dave McKean. I was twenty six when I first met Dave McKean. 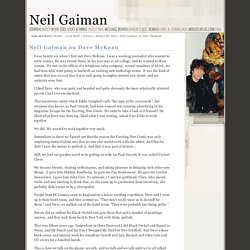 I was a working journalist who wanted to write comics. He was twenty three, in his last year at art college, and he wanted to draw comics. Haruki Murakami’s ‘Colorless Tsukuru Tazaki and His Years of Pilgrimage’ Photo Chalk up some of Haruki Murakami’s rock-star status to the way he evokes the self-pitying narcissism of youth. 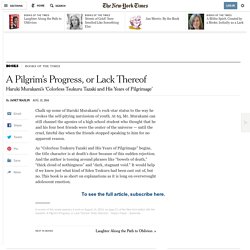 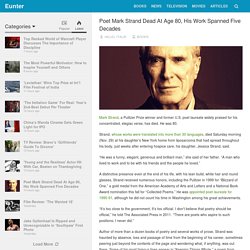 He was 80. Strand, whose works were translated into more than 30 languages, died Saturday morning (Nov. 29) at his daughter’s New York home from liposarcoma that had spread throughout his body, just weeks after entering hospice care, his daughter, Jessica Strand, said. “He was a funny, elegant, generous and brilliant man,” she said of her father. “A man who lived to work and to be with his friends and the people he loved.” 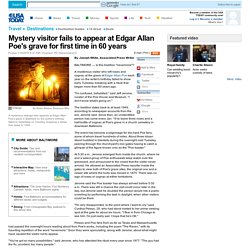 A mysterious visitor who left roses and cognac at the grave of Edgar Allan Poe each year on the writer's birthday failed to show early Tuesday, breaking with a ritual that began more than 60 years ago. "I'm confused, befuddled," said Jeff Jerome, curator of the Poe House and Museum. "I don't know what's going on. " The tradition dates back to at least 1949, according to newspaper accounts from the era, Jerome said.

Mishima: A Man Torn Between Two Worlds. 01_06_disgrafias.pdf. The 5 Most Common Writing Mistakes That Break Reader Immersion. Today marks the publication of the 50th review in my ImmerseOrDie indie book review series. 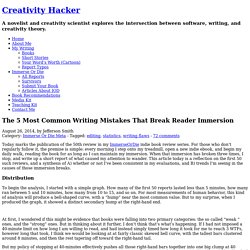 For those who don’t regularly follow it, the premise is simple: every morning I step onto my treadmill, open a new indie ebook, and begin my daily walk, reading the book for as long as I can maintain my immersion. When that immersion has broken three times, I stop, and write up a short report of what caused my attention to wander. This article today is a reflection on the first 50 such reviews, and a synthesis of A) whether or not I’ve been consistent in my evaluations, and B) trends I’m seeing in the causes of those immersion breaks. Distribution To begin the analysis, I started with a simple graph. Iceland Reads: The country of 320,000 punches well above its literary weight class.

In Reykjavík When it comes to mail delivery service in Iceland, two days stand out from the rest. 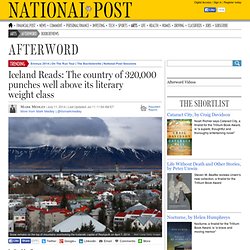 The first is when the IKEA catalogue arrives. I Feel Fine by Lelial Thibodeau - Adventure, Dystopian, Fantasy, Horror, Sci Fi, Thriller. Their truck hit a particularly deep pothole, jarring Anders Jagerskold from a rough, fretful slumber. His dreams infested with the stir of the dead still lining the roads. He sat up, rubbing the sleep from his eyes. The sun was sinking into the horizon to his left. He blinked a few times and fished his sunglasses from his shirt pocket, shoving them onto his face. “Hey babe,” he touched Riel’s arm.

“About half an hour away from Great Falls. Search results for: one page. David Foster Wallace was right: Irony is ruining our culture. 101 Practical Writing Tips From Hollywood Screenwriter Brian Koppelman. 101 Practical Writing Tips From Hollywood Screenwriter Brian Koppelman. From Jack Kerouac to Ayn Rand: Iconic Writers on Symbolism, 1963. Ernest Hemingway’s reading list for a young. Books By The Foot - Your Vision Achieved - Books by the Foot. 16 Rare "Harry Potter" Illustrations From The Books' Artist. JukePop Serials - About Us. The International Journal of Literature, Culture and the Arts. 3:00 p.m. rise 3:05 Chivas Regal with the morning. The Story of a Cover Girl: 80 Celebrated Designers and Illustrators Reimagine Nabokov's Lolita. The Changing Light at Sandover. Front cover of "The Changing Light at Sandover", showing the ballroom of James Merrill's childhood home in the 1930s.