North Bloomfield Properties has been helping owners and tenants enjoy affordable, quality homes in Southeast Michigan since 1989. Check out our website for hundreds of listings in locations that range from lakefront in the country to lofts in the city. Website: 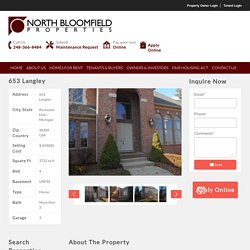 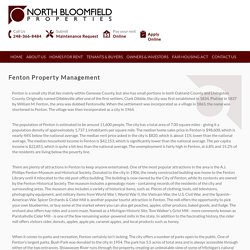 Originally named Dibbleville after one of the first settlers, Clark Dibble, the city was first established in 1834. Platted in 1837 by William M. Fenton, the area was dubbed Fentonville. When the settlement was incorporated as a village in 1863, the name was shortened to Fenton. The village was then incorporated as a city in 1964. The population of Fenton is estimated to be around 11,600 people. There are plenty of attractions in Fenton to keep anyone entertained. When it comes to parks and recreation, Fenton certainly isn't lacking. Aside from parks, there are additional attractions in Fenton as well. North Bloomfield Properties — Farmington Rental Property Management Company. COMING SOON! AVAILABLE 1st week of March. Commerce Township Property Management & Rental Property Management Companies in Commerce Township.

A popular suburb of Detroit, Commerce Township is a charter township located in Oakland County. 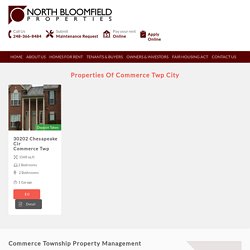 Formerly a highly popular weekend and summer destination, the cottages used as resorts are now permanent homes. However, despite these environment changes, Commerce Township has seen a spike in the population in recent years. A number of cities and unincorporated are found within the walls of the township, through which the Huron River runs mainly north-south. The population in Commerce Township is approximately 40,000 people.

The township has a total area of 29.8 square miles - giving it a population density of about 1,342.3 inhabitants per square mile. Perhaps one of the more well known facts about Commerce Township is the media coverage it received in 1994, when a young eagle scout made the area a short-lived media sensation. 17-year-old David Hahn - who lived in Commerce Township - built a makeshift nuclear reactor in his yard. Commerce Township is served by two school districts. Birmingham Property Management & Rental Property Management Companies in Birmingham. First settled in 1818, Birmingham is a bustling suburb of Detroit and is located in Oakland County. 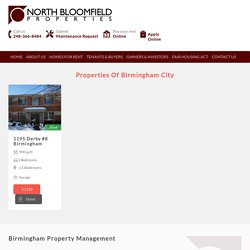 The land that would later become Birmingham was originally acquired by the United States Government in 1807 as a part of the Treaty of Detroit. Settlement was first delayed by the War of 1812, followed by a negative review by the Surveyor-General of the United States, who claimed the land was not suitable for cultivation - which was later disproved. Records show the first land entry was in January of 1819 by Colonel Benjamin Kendrick Pierce. It is said that Pierce returned to land for short periods of time but never settled on it. In mid-1819, John W. The area now called Birmingham originally received mail via the Bloomfield post office, until the village established its own post office in 1838. Established in 2001, the Birmingham Museum (formerly Birmingham Historical Museum & Park) is an extremely popular tourist attraction. Bloomfield Property Management & Rental Property Management Companies in Bloomfield.

The first township established in Oakland County, Michigan, Bloomfield Township was organized in 1827. 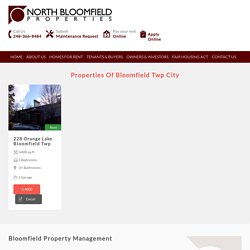 Typically just referred to as Bloomfield, the township nearly entirely surrounds the city of Bloomfield Hills. Despite being ranked as one of the most expensive communities in Michigan, Bloomfield Township certainly has its share of positive aspects, as well. House, Apartment, Duplex, Condo, Vacant Land for Rent in Michigan. Call Us 248-366-8484 SubmitMaintenance Request Pay your rentOnline. 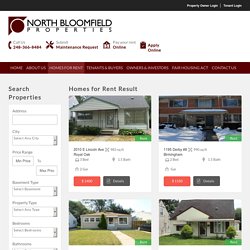 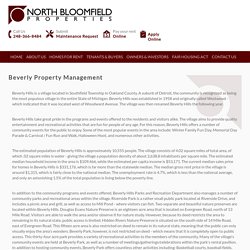 A suburb of Detroit, the community is recognized as being the most populous village in the entire State of Michigan. Beverly Hills was established in 1958 and originally called Westwood - which indicated that it was located west of Woodward Avenue. The village was then renamed Beverly Hills the following year. Beverly Hills take great pride in the programs and events offered to the residents and visitors alike.

The village aims to provide quality entertainment and recreational activities that are fun for people of any age. The estimated population of Beverly Hills is approximately 10,555 people. In addition to the community programs and events offered, Beverly Hills Parks and Recreation Department also manages a number of community parks and recreational areas within the village. Harper Property Management & Rental Property Management Companies in Harper. Located between Detroit and St. 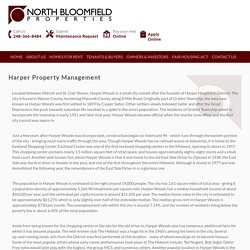 Clair Shores, Harper Woods is a small city named after the founder of Harper Hospital in Detroit. The city is found in Wayne County, bordering Macomb County along 8 Mile Road. Originally part of Gratiot Township, the area now known as Harper Woods was first settled in 1859 by Casper Salter. Other settlers slowly followed Salter and after the Great Depression, the push towards suburban life resulted in a spike in the area's population.

The residents of Gratiot Township voted to incorporate the township in early 1951 and later that year, Harper Woods became official when the charter took effect and the first city council was sworn in. Just a few years after Harper Woods was incorporated, construction began on Interstate 94 - which runs through the eastern portion of the city - bringing much more traffic through the area. The population in Harper Woods is estimated to be right around 14,000 people. The City of Harper Woods is served by two school districts. Franklin Property Management & Rental Property Management Companies in Franklin. Franklin is a rather small village, located in Southfield Township in Oakland County. 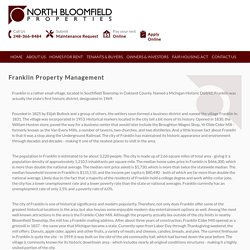 Named a Michigan Historic District, Franklin was actually the state's first historic district, designated in 1969. Founded in 1825 by Elijah Bullock and a group of others, the settlers soon formed a business district and named the village Franklin in 1831. The village was incorporated in 1953. Highland Property Management & Rental Property Management Companies in Highland. Highland Township is located in Oakland County, Michigan, and is a suburb of Detroit. 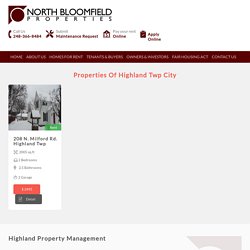 This charter township contains six separate unincorporated villages within its boundaries, which include: Clyde, East Highland, Hickory Ridge, Highland, Seven Harbors, and West Highland. In 1832, Naham Curtis was the first person to purchase land in what would later become Highland Township. Over the next few years, additional pioneer families arrived and officially founded the township.

However, there are many other things for which Auburn Hills is well known. Also found within the city are the headquarters of several extremely popular corporations, in addition to the marvelous Great Lakes Crossing Outlets shopping mall. It is estimated that nearly 22,700 people currently reside in Auburn Hills. The median household income in Auburn Hills is nearly $53,000 per year - approximately the same as the national average. Auburn Hills has an endless list of possible places to visit and things to do.