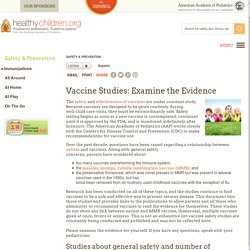 Because vaccines are designed to be given routinely during well-child care visits, they must be extraordinarily safe. Safety testing begins as soon as a new vaccine is contemplated, continues until it is approved by the FDA, and is monitored indefinitely after licensure. The American Academy of Pediatrics (AAP) works closely with the Centers for Disease Control and Prevention (CDC) to make recommendations for vaccine use. Over the past decade, questions have been raised regarding a relationship between autism and vaccines.

Along with general safetyconcerns, parents have wondered about: too many vaccines overwhelming the immune system;the measles, mumps, rubella combination vaccine (MMR); andthe preservative thimerosal, which was never present in MMR but was present in several vaccines used in the 1990s, but hassince been removed from all routinely used childhood vaccines with the exception of flu. Peltola H et al. U.S. MMR Vaccination and Autism Revisited in 2016. By F Edward Yazbak MD Many parents have suspected that their previously normal children regressed and were later diagnosed with autism following Measles, Mumps and Rubella (MMR) vaccination. 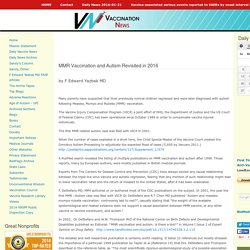 The Vaccine Injury Compensation Program (VICP) a joint effort of HHS, the Department of Justice and the US Court of Federal Claims (CFC) has been operational since October 1988 in order to compensate vaccine injured individuals. The first MMR related autism case was filed with VICP in 2001. When the number of cases exploded in a short time, the Chief Special Master of the Vaccine Court created the Omnibus Autism Proceeding to adjudicate the expected flood of cases (5,600 by January 2011.) A PubMed search revealed the listing of multiple publications on MMR vaccination and autism after 1998. F. In 2002, Dr. The detailed and well researched publication is certainly worth reading.

I certainly respect the right of Drs. Jenny McCarthy: "We're Not An Anti-Vaccine Movement ... We're Pro-Safe Vaccine" Jenny McCarthy is an actress, celebrity, author and activist. 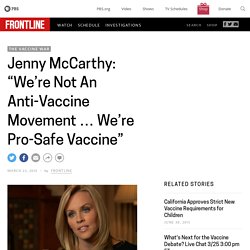 Her 7-year-old son, Evan, was diagnosed with autism when he was 2 1/2, following a series of vaccinations. The author of three books on autism, McCarthy helped organize a movement of parents concerned about a vaccine-autism link. This is the edited transcript of an interview conducted on Jan. 8, 2010. It was originally published on April 27, 2010. Jenny, in your book Louder than Words, you describe Evan’s first and subsequent seizures. One of the first signs when I knew something was wrong was one morning he slept in late. We went to the hospital. Three weeks later we went down to Palm Springs to visit Grandma, and when I pulled Evan out of the car, he had this stoned look on his face.

When we got to the hospital he seized again, and he seized on and off for the next seven hours. Describe his behavior before he started having seizures. Looking at milestones, he hit pretty much every milestone. So I found Dr. No MMR-Autism Link in Large Study of Vaccinated vs. Unvaccinated Kids. Study of over 95,000 children included 15,000 unvaccinated 2 to 5 year olds and nearly 2,000 kids already considered at high risk for autism In the largest-ever study of its kind, researchers again found that the measles-mumps-rubella (MMR) vaccine did not increase risk for autism spectrum disorder (ASD). 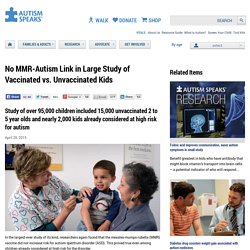 This proved true even among children already considered at high risk for the disorder. In all, the researchers analyzed the health records of 95,727 children, including more than 15,000 children unvaccinated at age 2 and more than 8,000 still unvaccinated at age 5. Nearly 2,000 of these children were considered at risk for autism because they were born into families that already had a child with the disorder. The report appears today in JAMA, the Journal of the American Medical Association.

“Consistent with studies in other populations, we observed no association between MMR vaccination and increased ASD risk,” the authors write. In an accompanying editorial, Dr. How My Daughter Taught Me that Vaccines Do Not Cause Autism - Voices For Vaccines. “It’s fun to watch you both grow up,” the doctor said, putting a Band-Aid over the site where my three-year-old daughter had just received the MMR vaccine. 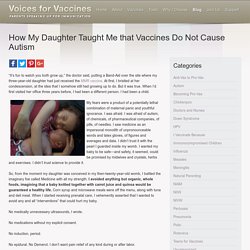 At first, I bristled at her condescension, at the idea that I somehow still had growing up to do. But it was true. When I’d first visited her office three years before, I had been a different person. I had been a child. My fears were a product of a potentially lethal combination of maternal panic and youthful ignorance. Vaccines DO Cause Autism-Undeniable Scientific Proof – Anti-Vaccine Scientific Support Arsenal.

There is absolutely undeniable scientific proof that vaccines cause autism. 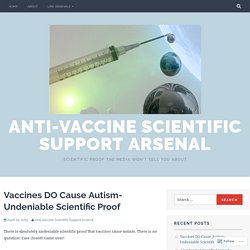 There is no question! Case closed! Game over! The people and the mainstream media who claim that the vaccine autism link has been thoroughly debunked are all bought and paid for by the vaccine industry. Vaccines Do Not Cause Autism Concerns. Autism spectrum disorder (ASD) is a developmental disability that is caused by differences in how the brain functions. 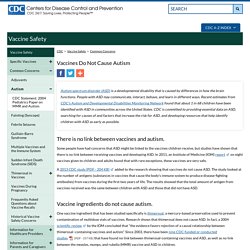 People with ASD may communicate, interact, behave, and learn in different ways. Recent estimates from CDC's Autism and Developmental Disabilities Monitoring Network found that about 1 in 68 children have been identified with ASD in communities across the United States. CDC is committed to providing essential data on ASD, searching for causes of and factors that increase the risk for ASD, and developing resources that help identify children with ASD as early as possible.

SHOCKING Autism Cover-Up Investigative Documentary 2016 on CDC and Vaccines. Vaccines and Autism: A Tale of Shifting Hypotheses. We use cookies to enhance your experience on our website. 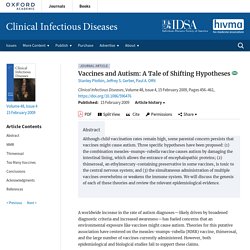 By clicking 'continue' or by continuing to use our website, you are agreeing to our use of cookies. You can change your cookie settings at any time. Skip to Main Content Advertisement Search Close Advanced Search Search Menu Skip Nav Destination Article Navigation Volume 48 Issue 4 15 February 2009 Article Contents.