Deep Ecology & Environmental Philosophy. I recently uncovered this final paper written for a course in Deep Ecology from last spring. 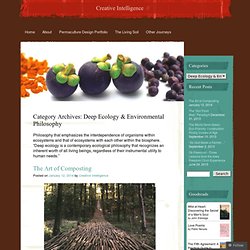 There are a good number of posts already that I drew on to generate this synthesis of ideas and final thoughts in a course on Deep Ecology: The “Whiterock experience” began in preparation for a camping trip at Whiterock Conservancy in Coon Rapids, Iowa. The plan was to travel together to a secluded location alongside the Middle Racoon River where 100,000-year-old sandstone stands tall and exposed along the meandering river.The Conservancy was once a thriving and pioneering farm -Garst Farm- where experiments with hybrid corn crops and modern monoculture production provided a model of farming that added tremendous fuel to the fire of modern industrial agriculture in the Midwest.

Now the vast acreage that the Garst Family holds serves multiple functions including a Nature resort for people like us who want to experience the wilderness on their segment of undeveloped acres. Sources. Social Ecology versus Deep Ecology. Social Ecology versus Deep Ecology: A Challenge for the Ecology Movement by Murray Bookchin [Originally published in Green Perspectives: Newsletter of the Green Program Project, nos. 4-5 (summer 1987). 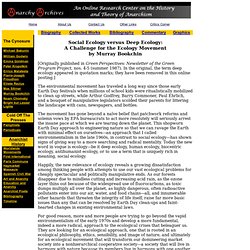 In the original, the term deep ecology appeared in quotation marks; they have been removed in this online posting.] Gaia Foundation. Mass Extinction Underway. Human beings are currently causing the greatest mass extinction of species since the extinction of the dinosaurs 65 million years ago. If present trends continue one half of all species of life on earth will be extinct in less than 100 years, as a result of habitat destruction, pollution, invasive species, and climate change.

(For details see links below.) This website began on April 22, 1998 with the posting of the article below. (The article is still here to provide historical context.) Following the article are more than 300 links to recent authoritative reports and updates about the current mass extinction. Welcome to All Beings. Links to Progressive Web Sites. RIC Links Page. Deep Ecology Index. Foundation For Deep Ecology. Church of Deep Ecology. Deep Ecology Platform. Deep Ecology, Ecopsychology, Holistic Science. Berry: Twelve Principles. The tongue of the largest glacier in Alaska, seen from space (courtesy NASA) Twelve Principles for Understanding the Universe and the Role of the Human in the Universe Process 1. 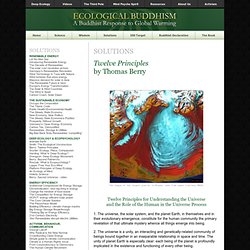 The universe, the solar system, and the planet Earth, in themselves and in their evolutionary emergence, constitute for the human community the primary revelation of that ultimate mystery whence all things emerge into being. 2. The universe is a unity, an interacting and genetically-related community of beings bound together in an inseparable relationship in space and time. 3. 4. 5. 6. 7. 8. 9. 10. 11. 12. Thomas Berry. Thomas Berry, C.P. 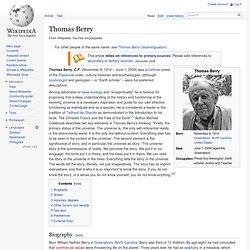 (November 9, 1914 – June 1, 2009) was a Catholic priest of the Passionist order, cultural historian and ecotheologian (although cosmologist and geologian – or “Earth scholar” – were his preferred descriptors). Deep ecology. Deep ecology is a contemporary ecological and environmental philosophy characterized by its advocacy of the inherent worth of living beings regardless of their instrumental utility to human needs, and advocacy for a radical restructuring of modern human societies in accordance with such ideas. 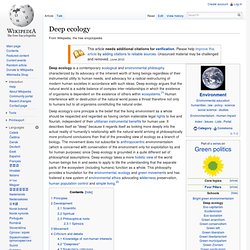 Deep ecology argues that the natural world is a subtle balance of complex inter-relationships in which the existence of organisms is dependent on the existence of others within ecosystems.[1] Human interference with or destruction of the natural world poses a threat therefore not only to humans but to all organisms constituting the natural order. Deep ecology's core principle is the belief that the living environment as a whole should be respected and regarded as having certain inalienable legal rights to live and flourish, independent of their utilitarian instrumental benefits for human use. Principles[edit] These principles can be refined down into three simple propositions: Development[edit] Arne Næss. Arne Dekke Eide Næss (AR-nə NASS;[note 1] 27 January 1912 – 12 January 2009) was a Norwegian philosopher who coined the term deep ecology and was an important intellectual and inspirational figure within the environmental movement of the late twentieth century.[6] Næss cited Rachel Carson's 1962 book Silent Spring as being a key influence in his vision of deep ecology. 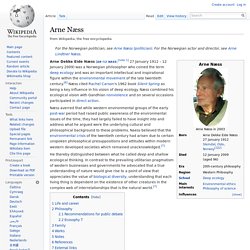 Næss combined his ecological vision with Gandhian nonviolence and on several occasions participated in direct action. Næss averred that while western environmental groups of the early post-war period had raised public awareness of the environmental issues of the time, they had largely failed to have insight into and address what he argued were the underlying cultural and philosophical background to these problems. He thereby distinguished between what he called deep and shallow ecological thinking. Life and career[edit] Professor Arne Næss campaigning for the Norwegian Green party in 2003 Philosophy[edit] Gaia hypothesis. The study of planetary habitability is partly based upon extrapolation from knowledge of the Earth's conditions, as the Earth is the only planet currently known to harbour life The Gaia hypothesis, also known as Gaia theory or Gaia principle, proposes that organisms interact with their inorganic surroundings on Earth to form a self-regulating, complex system that contributes to maintaining the conditions for life on the planet. 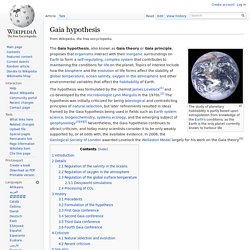