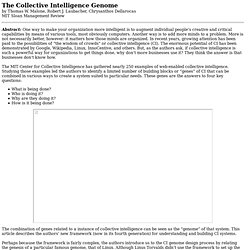 Malone, Robert J. Laubacher, Chrysanthos Dellarocas MIT Sloan Management Review Abstract: One way to make your organization more intelligent is to augment individual people’s creative and critical capabilities by means of various tools, most obviously computers. Another way is to add more minds to a problem. More is not necessarily better, however: it matters how those minds are organized. Harnessing Collective Intelligence with Games 2012. Collective Intelligence in Neural Networks and Social Networks « 100 Trillion Connections. Context for this post: I’m currently working on a social network application that demonstrates the value of connection strength and context for making networks more useful and intelligent. 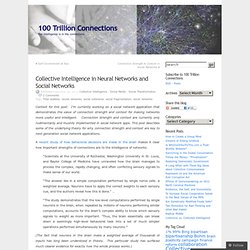 Connection strength and context are currently only rudimentarily and mushily implemented in social network apps. This post describes some of the underlying theory for why connection strength and context are key to next generation social network applications. A recent study of how behavioral decisions are made in the brain makes it clear how important strengths of connections are to the intelligence of networks. “Scientists at the University of Rochester, Washington University in St. Louis, and Baylor College of Medicine have unraveled how the brain manages to process the complex, rapidly changing, and often conflicting sensory signals to make sense of our world. “The answer lies in a simple computation performed by single nerve cells: a weighted average. 1. News, Augmented » Articles avec le tag » #intelligence collective. 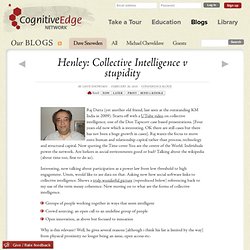 Starts off with a UTube video on collective intelligence, one of the Don Tapscott case based presentations. [Four years old now which is interesting, OK there are still cases but there has not been a huge growth in cases]. Raj wants the focus to move onto human and relationship capital rather than process, technology and structural capital. Now quoting the Time cover You are the centre of the World. Individuals power the network. Interesting, now talking about participation as a power law from low threshold to high engagement. The Collective Intelligence of the Web. In November of 2000, NASA did something unusual: it asked amateurs to help it map the surface of Mars. 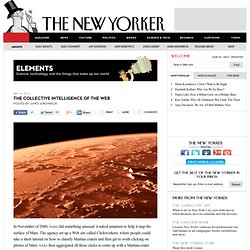 The agency set up a Web site called Clickworkers, where people could take a short tutorial on how to classify Martian craters and then get to work clicking on photos of Mars. NASA then aggregated all those clicks to come up with a Martian-crater map. There were two very interesting things about the results. First, although there was no financial incentive to participate, more than a hundred thousand people took part in the study, generating more than 2.4 million clicks. River of news about Collective Intelligence. What does Collective intelligence mean to me / you / us? Notes from Workshop at Macquarie University, Sydney at the Australasian Facilitators Network (AFN) Conference, 5/6 December. 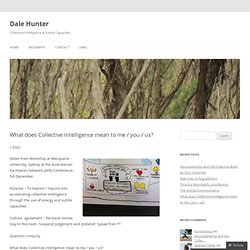 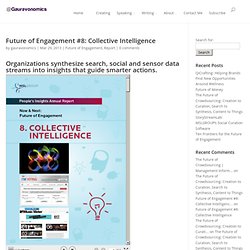 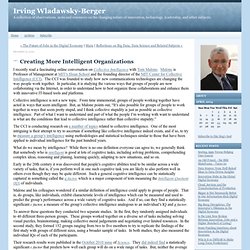 Malone is Professor of Management at MIT’s Sloan School and the founding director of the MIT Center for Collective Intelligence (CCI). The CCI was founded to study how new communications technologies are changing the way people work together. In particular, it is studying the various ways that groups of people are now collaborating via the Internet, in order to understand how to best organize these collaborations and enhance them with innovative IT-based tools and platforms.

Collective intelligence is not a new topic. From time immemorial, groups of people working together have acted in ways that seem intelligent. E. Schmidt: What is collective intelligence? Intelligences collectives. Coaching de l'Intelligence collective. Collective Intelligence. The Emergence of Collective Intelligence. ~Aristotle When we observe large schools of fish swimming, we might wonder who is choreographing that complex and sophisticated dance, in which thousands of individuals move in harmony as if they knew exactly what to do to produce the collective spectacle. So, what is “Emergence”? School of fishes dancing is an example of “emergence”, a process where new properties, behaviors, or complex patterns results of relatively simple rules and interactions. One can see emergence as some magic phenomena or just as a surprising result caused by the current inability of our reductionist mind to understand complex patterns.

Whichever way we think, examples of emerging behaviors are abundant in nature, science, and society and are are just a fact of life. Humans can do it too We humans have even built artificial environments that allow for collective intelligence to express itself. Women And Collective Intelligence Will Solve Our Planetary Crises. Sustainability is a so-called wicked problem. 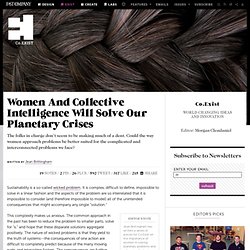 It is complex, difficult to define, impossible to solve in a linear fashion and the aspects of the problem are so interrelated that it is impossible to consider (and therefore impossible to model) all of the unintended consequences that might accompany any single “solution.” This complexity makes us anxious. The common approach in the past has been to reduce the problem to smaller parts, solve for “x,” and hope that these disparate solutions aggregate positively. The nature of wicked problems is that they yield to the truth of systems--the consequences of one action are difficult to completely predict because of the many moving parts and interacting factors.

The consequences are further disguised because of the time delay in large systems. Forecast 2020: Web 3.0+ and Collective Intelligence « simple processes. “We know what we are, but we know not what we may become” – Shakespeare The ancient Chinese curse or saying — “May you live in interesting times.” — is upon us. 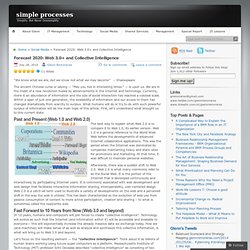 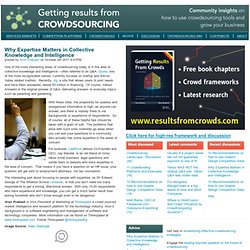 Quora, one of the more recognizable names, currently focuses on startup and Silicon Valley related matters. Recently, Jig, a site that allows users to post needs and have them answered, raised $3 million in financing. Of course, Yahoo! Answers is the original pioneer of Q&A, delivering answers to everyday topics such as parenting and gardening. With these sites, the propensity for useless and unorganized information is high, as anyone can answer, and there is nobody there to vet backgrounds or experience of respondents. For example, LawPivot (whose Co-Founder and CEO, Jay Mandal, is an old friend of mine) takes small business’ legal questions and sends them to lawyers who have expertise in the area of concern. The interesting part about focusing on people with expertise, as Dr. Collective intelligence: Number of women in group linked to effectiveness in solving difficult problems. When it comes to intelligence, the whole can indeed be greater than the sum of its parts.

A new study co-authored by MIT, Carnegie Mellon University, and Union College researchers documents the existence of collective intelligence among groups of people who cooperate well, showing that such intelligence extends beyond the cognitive abilities of the groups' individual members, and that the tendency to cooperate effectively is linked to the number of women in a group. Many social scientists have long contended that the ability of individuals to fare well on diverse cognitive tasks demonstrates the existence of a measurable level of intelligence in each person. In a study published Sept. 30, in the advance online issue of the journal Science, the researchers applied a similar principle to small teams of people. That collective intelligence, the researchers believe, stems from how well the group works together. Malone believes the study applies to many kinds of organizations. Lapidarium notes. How to Cultivate Collective Intelligence.

The first time I heard the word "swarming" in a business context, it made me chuckle. I had an instant visual of bees dressed in suits and carrying briefcases, furiously buzzing over, under, and around a conference table. They weren’t accomplishing anything—just making a lot of noise and looking for something to sting. Then it occurred to me that all worker bees are female. Each bee in my mental image was now wearing a suit with a skirt, and red high heels on all six feet.

The advancement in communication technology has prompted the rise of global companies at low overhead costs. The internet is widespread, therefore a globally integrated company has no geographical boundaries and may access new markets, ideas and technology. Shared Intelligence Space A group of users marshal resources to create an ecology that meets their needs often (but not only) in relation to the co-configuration, co-creation and co-design of a particular learning space that allows learners to create their own context. End of Business as Usual - Glenn's blog. This is the second of a series of posts on the topic of programming Collective Intelligence in web applications. This series of posts will draw heavily from Santam Alag’s excellent book Collective Intelligence in Action.

These posts will present a conceptual overview of key strategies for programming CI, and will not delve into code examples. For that, I recommend picking up Alag’s book. You won’t be disappointed! Click on the following links to access previous posts in this series: Online collaboration doesn’t happen by magic. Online collaboration doesn’t happen by magic. 6 Tips for Open Collaboration. [This is a crosspost from Alpha Lo's blog, Open Collaboration. Though he had a much catchier title for the post ("What I Learned From Venessa Miemis" - ha), I thought he did a great job listing some of the attitudes and behaviors helpful when trying to extend oneself, collaborate, and evolve. Alpha's doing some amazing work in creating gift circles on the west coast. Collective Intelligence (avec tweets) · TheTransitioner.

The Reality of Collective Intelligence. Iconic political, religious and corporate leaders characterize the history of the world. Those leaders often represented an era or a movement, and their strategies may have been identified as what changed the outcome of an event like an election or a war. Arguably, while they may have been considered the face of change, they could not be individually responsible for the force of change.

Not So Intelligent Collective Intelligence « Toronto Prediction Market Blog. If you have read James Surowiecki’s book, The Wisdom of Crowds, you know the story of Galton’s Ox. Early in the 1900s, a live ox was put on display at a county fair. People were asked to guess the weight of the ox, once it had been butchered. Some of the participants were considered “experts” at this, others were not. Collective Intelligence: has the golden age of the 'citizen scientist' finally arrived? A study by IIASA - the Vienna based International Institute for Applied Systems Analysis - was based on crowdsourced data from a Geo-Wiki project in which citizen scientists examine satellite images and classify land use data.

Collective Intelligence. Intelligence collective. Collective intelligence. Alsica.pdf - isociety11.pdf. Human-assisted reporting, mass intelligence, and mobile mobile mobile: What we learned at ISOJ. Collective Intelligence: Humanity’s Mass Mind. “Saving the world differently…” “Saving the world differently…” was the title of an event, last February, which I’ve been waiting for with joyous anticipation. It was organized by the RSA (Royal Society for the encouragement of Arts, Manufactures and Commerce), of which I am a Fellow.

RSA bills itself as “an enlightenment organisation committed to finding innovative practical solutions to today’s social challenges.” The joy in my anticipation came from suspecting that the social innovation vision that we will be introduced to, will be radical enough to my taste; not merely treating the symptoms of the multiple, intertwining crises of which our world is suffering, but addressing their common root cause. The patient has multiple, interdependent, and systemic dysfunctions, and medical specialists focusing on only one or another organ can’t understand, let alone change its conditions.