Kickass.to. YouTorrent.com (BETA) - Your Torrents. Our Legal Downloads. Torrent Reactor - The most active torrents on the web. Torrent Crazy - The simplest torrent site. Thepiratebay.se. The Pirate Bay is immune to SOPA. This site may earn affiliate commissions from the links on this page. 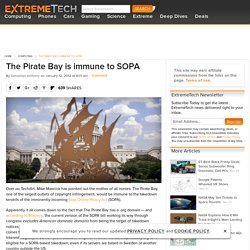 Terms of use. Over on Techdirt, Mike Masnick has pointed out the mother of all ironies: The Pirate Bay, one of the largest outlets of copyright infringement, would be immune to the takedown tendrils of the imminently incoming Stop Online Piracy Act (SOPA). Apparently it all comes down to the fact that The Pirate Bay has a .org domain — and according to Masnick, the current version of the SOPA bill working its way through congress excludes American domestic domains from being the target of takedown notices from copyright holders. In this case, a “domestic domain” is any domain that comes from a TLD run by an American registry — and sure enough, .org’s registry is Public Interest Registry, a US non-profit based in Virginia. In other words, thepiratebay.org isn’t eligible for a SOPA-based takedown, even if its servers are based in Sweden or another country outside the US. Tpb.piraten.lu. The Pirate Bay. 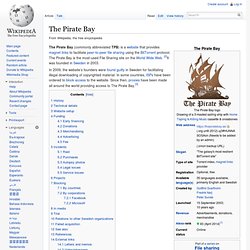 The Pirate Bay is the most-used File Sharing site on the World Wide Web. [2]It was founded in Sweden in 2003. In 2009, the website’s founders were found guilty in Sweden for facilitating illegal downloading of copyrighted material. In some countries, ISPs have been ordered to block access to the website. Since then, proxies have been made all around the world providing access to The Pirate Bay.[3] History[edit] The Pirate Bay in 2004 The Pirate Bay was hosted for several years by PRQ, a Sweden-based company, owned by creators of TPB Gottfrid Svartholm and Fredrik Neij.[9] PRQ is said to provide "highly secure, no-questions-asked hosting services to its customers On 23 January 2012, The Pirate Bay added the new category Physibles. Technical details[edit] Website setup[edit] Comparison of BitTorrent sites. There are many different BitTorrent websites. 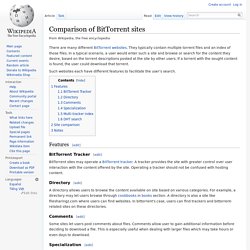 They typically contain multiple torrent files and an index of those files. In a typical scenario, a user would enter such a site and browse or search for the content they desire, based on the torrent descriptions posted at the site by other users. If a torrent with the sought content is found, the user could download that torrent. Such websites each have different features to facilitate the user's search. Features[edit] BitTorrent Tracker[edit] Ten Most Used BitTorrent Sites Compared. Top 35 Torrent Download Sites: a Visual Guide to the Best Torrent Sites. OpenTrackers - The place to look for open private trackers! Guide To BitTorrent - Indexing Sites. Torcache - Torrent Cache. IsoHunt › the BitTorrent & P2P search engine. T411 - Torrent 411 - Tracker Torrent Français - French Torrent Tracker - Tracker Torrent Fr.

Download Torrents Movies Musics from isohunt.com Bittorents. IsoHunt. For years isoHunt's founder had been in legal battles with conglomerates of IP rights holders over allegations of copyright infringing activity. 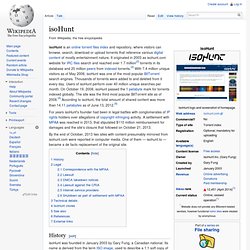 A settlement with MPAA was reached in 2013, that stipulated $110 million reimbursement for damages and the site's closure that followed on October 21, 2013. By the end of October, 2013 two sites with content presumably mirrored from isohunt.com were reported in computer media. One of them — isohunt.to — became a de facto replacement of the original site. History[edit] isoHunt was founded in January 2003 by Gary Fung, a Canadian national. On February 23, 2006, the Motion Picture Association of America (MPAA) issued a press release stating they were suing isoHunt for copyright infringement.