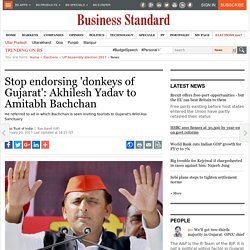 I appeal to century's biggest star, please stop endorsing the donkeys of Gujarat)," Akhilesh said, giving an interesting twist to the no-holds-barred election campaign. "What will happen if the donkeys also start getting advertised? The bitter remarks came at a time when parties are racing to the finish line of the state polls described by many as the semi-final before the 2019 Union election. Mind the impact of artificial intelligence on jobs, warns Satya Nadella.

UP assembly polls: Dimple Yadav campaigns for sister-in-law Aparna. Uttarakhand records 68% voting. Over 68 per cent of the electorate in Uttarakhand voted on Wednesday, which is two per cent more than the last Assembly polls, to decide the fate of 628 candidates in 69 out of the total 70 seats. 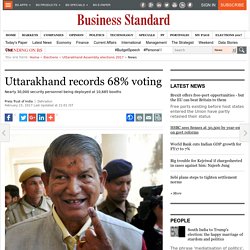 The turnout in the 2012 Assembly polls was around 66 per cent. The State Election Office here said over 68 per cent of the electorate cast their votes by 5 pm but many people were still standing in the queues outside the booths, implying that the poll percentage may go up by the time the final figures are collated. Poll schedule for the lone Karnaprayag seat in Chamoli district had to be revised to March 9 due to the death of BSP candidate Kuldeep Singh Kanwasi in a road accident on Sunday last. Polling took place amid tight security, with nearly 30,000 security personnel being deployed at 10,685 booths, of which 460 were in snowbound areas. For the first time, Voter-verified paper audit trail (VVPAT) machines were used in three constituencies including BHEL Ranipur, Dharampur and Rudrapur. Trump can be a blessing in disguise for IT players: Mukesh Ambani.

Isro launches record 104 satellites into orbit. Sasikala back in jail, AIADMK infighting rages. UP elections: Phase two polling begins in 67 Assembly constituencies. In Uttar Pradesh, polling for the second phase will be held in 67 constituencies spread over 11 districts on Tuesday. 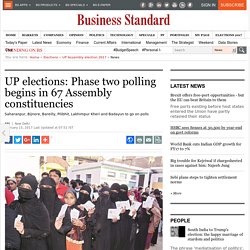 The districts going for polls in the second phase include Saharanpur, Bijnore, Bareilly, Pilibhit, Lakhimpur Kheri and Badayun. Barricades have been erected at the entry points of districts where round the clock intense search of vehicles is being carried out by security forces. Voting will begin at 7.00 AM and continue till five in the evening.

There are 721 candidates including 82 women and one from the third gender in the fray in this phase. The fate of these candidates will be decided by 2 crore 28 lakhs voters, of which a sizable number, 47.72 lakh, is of young voters, aged 18-19 years. 14, 771 polling centres and 23,693 polling stations have been erected in this phase. Uttarakhand votes tomorrow, 2nd phase in Uttar Prades. US visa curbs can accelerate IT work to Bengaluru, says Nilekani. Was govt right in pushing Aadhaar as money Bill? SC to examine. UP polls 2017: More women losing deposits, fewer winning elections. Had I not taken Spicejet, it would have been another Kingfisher: Ajay Singh. Jolly LLB 2 earns over Rs 50 crore in opening weekend. 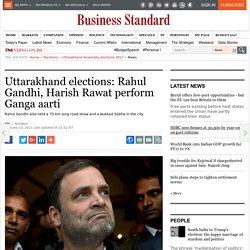 Rahul also held a 75-km long road show and a Nukkad Sabha in the city. A day before, tearing into Prime Minister Narendra Modi's 'real' motives behind demonetisation, Rahul Gandhi branded the move as a tool to waive off loans worth crores taken by some 50 rich families, instead of an initiative against black money as the Prime Minister has projected. "He claimed that black money is in Swiss bank accounts, and that he would bring the money back from Swiss banks.

The Swiss government has given him the names of Swiss account holders. I want to ask Prime Minister Modi, why have you not revealed those names in the Lok Sabha and Rajya Sabha? Modi replies to Akhilesh's taunt, says people of UP are not fools. Taking a jibe at Chief Minister Akhilesh Yadav's repeated assertion of 'kaam bolta hai', Prime Minister Narendra Modi on Monday threw light on the rising crime rate in Uttar Pradesh and accused the Samajwadi Party of fooling the people. 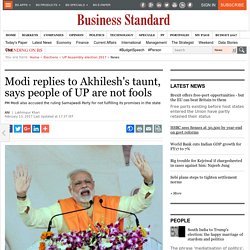 "They (Akhilesh) say 'kaam bolta hai', but several projects here are incomplete. What is speaking volumes are the instances of women harassment in the state," Prime Minister Modi said while addressing a rally here. "The people of Uttar Pradesh are not fools. About 2.83 lakh estimated central government jobs by 2018. Demonetisation 'biggest scam of 2016': P Chidambaram. Jayalalithaa left her wealth to AIADMK, says Panneerselvam. Sasikala presents MLAs before media, claims they are free. Vote BSP or suffer atrocities: Mayawati to minorities, Dalits. BSP chief Mayawati Saturday appealed to minority and backward communities to vote for her party, warning that BJP will "abolish reservation and inflict atrocities" on them if it comes to power. 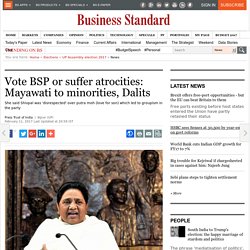 "If BJP is voted to power, Dalits will be oppressed under the garb of love jihad, nationalism and cow protection, whereas BSP will not interfere in religious issues such as triple talaq, if it comes to power," she said while addressing an election rally in Bijnor district in the afternoon. Hitting out at the ruling Samajwadi Party, Mayawati said that Shivpal Yadav has been "disrespected" over putra moh (love for son), which has led to groupism in the party and has weakened it. The BSP supremo also promised reservation on economic basis for the upper castes and warned the Dalits of losing reservation if they vote BJP to power. 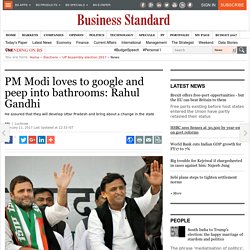 Continuing his tirade against Prime Minister Modi, Gandhi said the former resorts to the strategy of 'distraction' when he does not have answers to questions. "Narendra Modi's strategy is distraction...He uses this strategy when he doesn't have answers. Modi ji has failed cent percent in the past 2.5 years," Rahul Gandhi told media while launching Common Minimum Programme here. Condemning the Prime Minister for not fulfilling his promises, Gandhi said, "Prime Minister Modi promised employment to two crore people every year.

Not even percent has been accomplished. " Refuting the speculations of any rift between the Samajwadi Party (SP) and Congress, Gandhi asserted both the parties are coordinating with each other. Industrial output, tax numbers show note ban impact. Honda City vs Maruti Ciaz battle heats up. Modi hails missile test, mocks Congress by saying it will ask for 'proof'

While hailing the successful test-firing of an interceptor missile, Prime Minister Narendra Modi on Saturday took potshots at the Congress party saying they would ask for proof of the test. 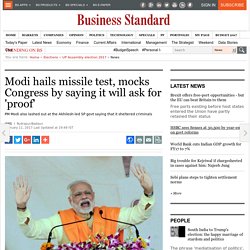 Addressing an election rally in Uttarakhand, he also said that more than the business class, the corrupt ways of politicians have harmed the country. BJP sweeps legislative council polls in Uttar Pradesh. Akhilesh, Rahul release 10-point common minimum programme for UP. Seeking to win over 300 of the 403 Assembly seats in Uttar Pradesh, Samajwadi Party president Akhilesh Yadav and Congress vice president Rahul Gandhi on Saturday jointly released ten commitments on which their alliance will work on after coming to power. 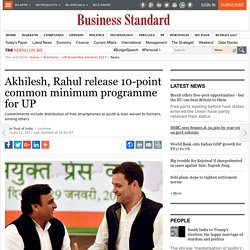 The two leaders at a press conference released the commitments which include major promises made by the two parties to the people of the state in their manifestos. The list of commitments include distribution of free smartphones to youth, employment guarantee through skill development to 20 lakh youths, loan waiver to farmers, cheap power and proper remuneration for crops. West Bengal BJP gets hands-on training in UP polls. With the Bharatiya Janata Party (BJP) leaving no stone unturned to win the crucial Uttar Pradesh elections, its Bengal unit has seized the opportunity to provide a hands-on training to its young leaders on the nitty-gritty of elections. 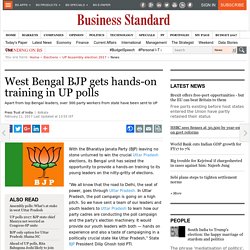 "We all know that the road to Delhi, the seat of power, goes through Uttar Pradesh. UP polls: Sonia-Mulayam missing from campaign trail. UP polls: BSP-SP supporters clash in Meerut. Choose a govt which can free UP from corruption, hooliganism: BJP. UP polls 2017: Maya's fortunes hinge on winning reserved seats from SP, BJP. As UP polls approach, BJP has most ad inserts on TV in fifth week of 2017. Bharatiya Janata Party had most TV ad insertions between January 28 and February 3, according to Broadcast Audience Research Council (Barc). At 11,563 insertions during the week under consideration, the BJP outstripped other brands like Idea 4G 9,144, Vivo V5 Plus 8,157, and Horlicks 7,344. India might allow Apple to refurbish iPhones for export. UP Assembly elections: 10.56% voting recorded in UP elections till 9 am.

The election process will be held in 73 assembly constituencies spread across 15 districts of the state. A total of 2.60 crore voters, including over 1.17 crore women and 1,508 belonging to third gender category are eligible to cast their ballots in 26,823 polling stations to decide the fate of 839 candidates.