LearnEnglishTeens. By Paul Jennings Well, here I am again, sitting outside the Principal's office. 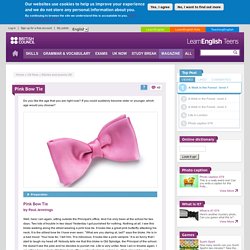 And I've only been at the school for two days. Two lots of trouble in two days! Yesterday I got punished for nothing. Nothing at all. I notice that he is still wearing the pink bow tie. I am a very nervous person. 'How did you do that? ' Straight away she starts to grow younger. 'I am not your Dad Dad,' I say. Splodge is fiddling with his pink bow tie. He is about eighteen and is good-looking. ‘Pink Bow Tie’ is from ‘Thirteen Unpredictable Tales’ by Paul Jennings Reprinted with kind permission of Puffin Books, Australia This story was selected as part of the BritLit project.

Ex Poser. LearnEnglishTeens. Learnenglishteens.britishcouncil. As a foreigner living in Colombia, it is my job to represent British culture well. 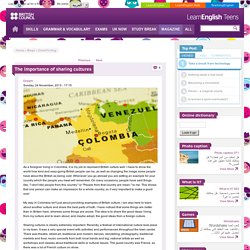 I have to show the world how kind and easy-going British people can be, as well as changing the image some people have about the British as being cold. Whenever you go abroad you are setting an example for your country which the people you meet will remember. On many occasions, people have said things like, "I don't like people from this country. " or "People from that country are mean.

" to me. This shows that one person can make an impression for a whole country, so it very important to make a good one! My stay in Colombia isn't just about providing examples of British culture, I am also here to learn about another culture and share the best parts of both. Sharing cultures is clearly extremely important. Friends Reunited! Judge Meets Old Pal In Dock - Ingyenes online angol tanulás, Ingyen Angol nyelvtanulás. A tárgyaláson jött rá a bírónő, hogy egykori osztálytársát ítéli el - olvasd el és nézd meg a hihetetlen történetet! 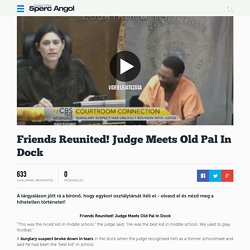 Friends Reunited! Judge Meets Old Pal In Dock "This was the nicest kid in middle school," the judge said. "He was the best kid in middle school. We used to play football. " A burglary suspect broke down in tears in the dock when the judge recognised him as a former schoolmate and said he had been the "best kid" in school. Arthur Booth appeared in front of judge Mindy Glazer at Miami-Dade bond court charged with burglary. Booth, 49, was arrested on Monday after being spotted driving a car that matched the description of one allegedly involved in a robbery and failing to stop after a police officer signalled him to. A police chase followed, resulting in two accidents before he crashed the car. He fled on foot but was eventually caught and charged with various offences. "Oh my goodness," replied Booth several times, at first with smiles and then breaking down in tears. Coca-Cola Removes Its Labels To Send An Important Message - Ingyenes online angol tanulás, Ingyen Angol nyelvtanulás. 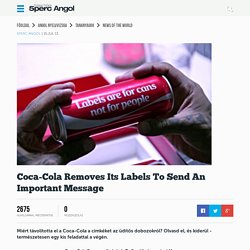 Olvasd el, és kiderül - természetesen egy kis feladattal a végén. Coca-Cola Removes Its Labels To Send An Important Message Loud and clear. In a video for Coca-Cola, six men sit around a table in a pitch black room, and guess what the others look like based on stated interests, professions and hobbies. When one man says, "I read a lot of books. 'I Didn't Know My Mother Was Audrey Hepburn' - Ingyenes online angol tanulás, Ingyen Angol nyelvtanulás. 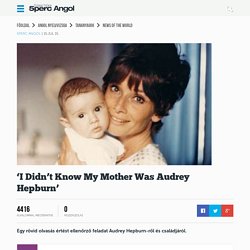 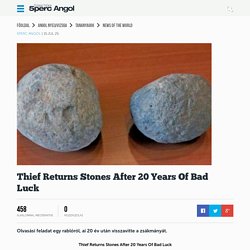 Thief Returns Stones After 20 Years Of Bad Luck Ancient sling stones taken two decades ago have been returned to a museum, with a note urging others not to steal antiquities. A thief has returned two archaeological treasures with a confession note - after apparently experiencing 20 years of bad luck. The 2,000-year-old sling stones were taken from the ancient city of Gamla on the Golan Heights in July 1995, the Israel Antiquities Authority (IAA) said. LearnEnglishTeens. Never underestimate the power of a bed time story. 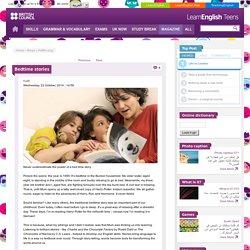 Picture the scene: the year is 1999. It’s bedtime in the Burdon household. My older sister, aged eight, is standing in the middle of the room and loudly refusing to go to bed. Meanwhile, my three year old brother and I, aged five, are fighting furiously over the top bunk bed. A civil war is brewing. Sound familiar? This is because, what my siblings and I didn’t realise, was that Mum was tricking us into learning. From fairy tales to ghost stories, we learn so much from reading, listening to and sharing stories. LearnEnglishTeens. Whether it is the golf courses which rank among the best in the world, the proximity to the North Sea with waves ideal for surfing (as long as you don’t mind wearing two wetsuits!) 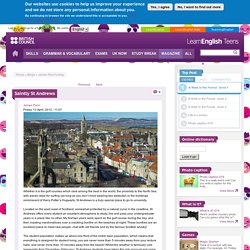 Or the buildings reminiscent of Harry Potter’s Hogwarts, St Andrews is a truly special place to go to university. Located on the east coast of Scotland, somewhat protected by a natural curve in the coastline, St Andrews offers every student an excellent atmosphere to study, live and pass your undergraduate years in a place like no other. My first two years were spent on the golf course during the day, and then roasting marshmallows over a crackling bonfire on the beaches at night. These bonfires are an excellent place to meet new people, chat with old friends and try the famous Scottish whisky!

There must be something in the St Andrews air as over one third of all students get married to each other, the highest rate of any university in the United Kingdom.