| North Hollywood Toyota has been serving Los Angeles and surrounding communities since 1967 and is one of the larger car dealers in Southern California.

The 2018 Toyota Tundra TRD Brings New Sport and Technology to the Road. Toyota 86 860 Special Edition. Posted Friday, Apr 07, 2017 by North Hollywood Toyota Toyota markets its 86 sports car with the tagline “It’s Not for Everyone.” 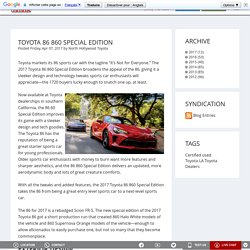 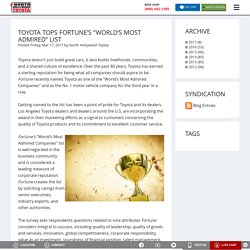 Over the past 80 years, Toyota has earned a sterling reputation for being what all companies should aspire to be. Toyota 4Runner & Highlander in Friendly Competition to be America’s Favorite SUV. Posted Friday, Mar 17, 2017 by North Hollywood Toyota. 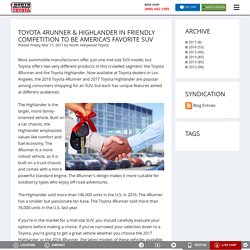 Toyota Goes for Sustainability Gold with Olympic Partnership. Toyota has signed on with the International Olympic Committee to become a member of The Olympic Partnership, but the deal isn’t just limited to Toyota providing financial support for the games. 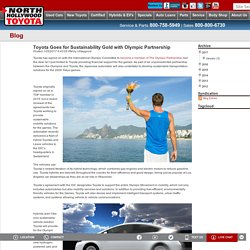 As part of an unprecedented partnership between the Olympics and Toyota, the Japanese automaker will also undertake to develop sustainable transportation solutions for the 2020 Tokyo games. Toyota originally signed on as a TOP member in 2015, but a recent renewal of the agreements has Toyota working to provide sustainable mobility solutions for the games. The automaker recently delivered a fleet of hybrid Toyotas and Lexus vehicles to the IOC’s headquarters in Switzerland. Toyota Earns Loyalty with Outstanding Vehicles. Toyota customers are often lifelong customers, as the quality and reliability of the brand convince them that no other automaker can offer the value provided by Toyota cars, trucks, and SUVs. 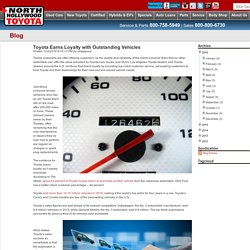 Los Angeles Toyota dealers and Toyota dealers around the U.S. reinforce that brand loyalty by providing top-notch customer service, persuading customers to trust Toyota and their dealerships for their new and pre-owned vehicle needs. Just about everyone knows someone who has an old Toyota that’s still on the road after 200,000 miles or more. These diehard owners swear by their Toyotas, often remarking that the only maintenance or repairs they’ve ever had to perform are regular oil changes or spark plug replacements. Seven Reasons Why the Toyota Corolla is the World's Most Popular Car.

The Toyota Corolla has dominated automobile sales for decades and holds the title of being the best-selling nameplate in the world, having sold more than 40 million vehicles since its introduction in 1966. 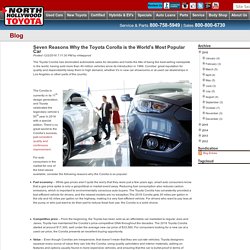 Corollas’ great reputation for quality and dependability keep them in high demand, whether it’s in new car showrooms or at used car dealerships in Los Angeles or other parts of the country. Toyota Vastly Expanding Its Hybrid Line-Up. Auto consumers will forever remember Toyota as the car manufacturer that made hybrids mainstream with its U.S. launch of the Prius in the early 2000s. 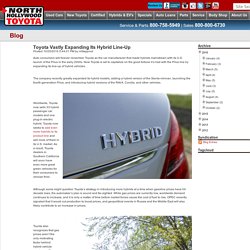 Now Toyota is set to capitalize on the good fortune it’s had with the Prius line by expanding its line-up of hybrid vehicles. The company recently greatly expanded its hybrid models, adding a hybrid version of the Sienta minivan, launching the fourth-generation Prius, and introducing hybrid versions of the RAV4, Corolla, and other vehicles. Worldwide, Toyota now sells 33 hybrid passenger car models and one plug-in electric hybrid. Toyota now seeks to add even more hybrids to its product line and sell more of them in its U.S. market. As a result, Toyota dealers in Southern California will soon have even more great green vehicles for their consumers to choose from. Although some might question Toyota’s strategy in introducing more hybrids at a time when gasoline prices have hit decade lows, the automaker’s plan is sound and far-sighted. 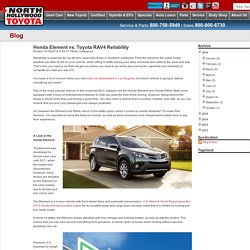 From the desert to the coast, brutal weather can take its toll on your vehicle, while sitting in traffic during your daily commute also adds to the wear and tear. That’s why you need a car that will get you where you need to go while also having the capability and reliability to complete any task you ask of it. You have a lot of choices when you visit used car dealerships in Los Angeles, but which vehicle is going to deliver everything you need? Two of the more popular choices in the crossover/SUV category are the Honda Element and Toyota RAV4. Both come equipped with a bevy of entertainment features to help you pass the time while driving. Top Five Secrets to Toyota Camry’s Success. Top Five Secrets to Toyota Camry’s Success The Toyota Camry has been America’s best-selling vehicle for 14 years in a row – a testament to the nation’s appreciation for the well-designed and built sedan. 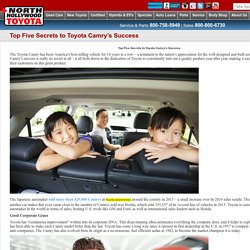 The secret to the Camry’s success is really no secret at all – it all boils down to the dedication of Toyota to consistently turn out a quality product year after year, making it easy for Toyota dealers to sell their customers on this great product. The Japanese automaker sold more than 429,000 Camrys at Toyota dealerships around the country in 2015 – a small increase over its 2014 sales results.

The only vehicle from another car maker that even came close to the number of Camrys sold was Honda, which sold 355,557 of its Accord line of vehicles in 2015. Toyota is currently the leading automaker in the world in terms of sales, beating U.S. rivals like GM and Ford, as well as international sales leaders such as Honda. Good Corporate Genes Why a 2017 Camry? Toyota Raising Stakes for 86 Redesign. Toyota Celebrates 50 Years with Special Edition Corolla.

We collect and use information about you from various sources. 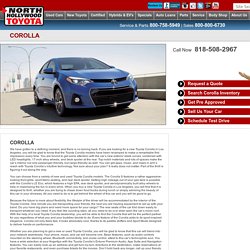 Information from our experience and our affiliated companies' experiences. Information about your transactions and account experience with us or our affiliated companies, such as parties to transactions, contract or lease balances, payment history, and communications and correspondence; 3. We may disclose any of the above five types of Consumer Information to credit bureaus and similar organizations, and otherwise when permitted by law. Thank you for reading this notice and learning about our privacy policy. New Toyota Sienna Offers a Family-Friendly Favorite. We collect and use information about you from various sources. The amount and nature of the information collected and used varies from transaction to transaction, but the information can include the information described in the following five types: 1. Information from you. Information you provide to us on applications, other forms, and by other means, such as your name, address, social security number, assets, income, and debt; 2.

Toyota 4Runner vs. the Competition. The Toyota 4Runner is time and again one of the top sport utility vehicles in its class. As drivers visit their local car dealerships in Los Angeles, they want an SUV that stands tough and delivers all of the features and performance they need. This is what the Toyota 4Runner was built to achieve. Before making any decision, including one as important as buying or leasing a new vehicle, it is important to do your research so you know exactly what you are getting for the price.

As we move into another model year, it is time to see how the 2016 4Runner matches up against other crossovers on the market. North Hollywood Toyota. Toyota Camry vs. the Competition We live in a Golden Age for owning cars in the United States. While many car aficionados long for the days of classic rides and muscle cars, it is safe to say that today’s drivers can get more out of any vehicle on the market. Toyota Prius vs. the Competitors. Replace Your Ride Program. Replace Your Ride Program When you or someone in your family is out on the road, you want them to be as safe and secure as possible.

At the same time, there is a growing need in California to reduce vehicle emissions in order to protect the environment and our natural resources. It can be difficult for a lot of families to upgrade their vehicles every few years to ensure they have the technology to achieve these goals. This is why the state of California has developed the Replace Your Ride program as a way for families to earn credit toward a new vehicle that is safer and more environmentally friendly. New Toyota Sienna Sleeker, More Refined. With a bold new exterior design and top-of-the-line amenities the new 2015 Toyota Sienna carries the "Swagger Wagon" nickname for a good reason.

For auto consumers searching Los Angeles car dealerships for a family hauler with personality, the 2015 Sienna offers comfort, practicality and style. What's New? The Future of Hydrogen Fuel Cell Vehicles. The Benefits of Hybrid Vehicles. Nowadays, consumers around the world are taking long overdue and much needed steps to reduce their individual impact on the environment. One of the biggest culprits when it comes to pollution is the automobile. A large part of each day is spent stuck in traffic, especially in Los Angeles, meaning that fuel emissions steadily work their way into the atmosphere and have a large and lasting impact on our lives.

Making the switch to a hybrid vehicle at your Los Angeles Toyota dealer not only reduces your environmental footprint, it can also save you money in the long run. Toyota: Welcome to the Family. Toyota Gives Drivers a Heads Up In 3D.