Watch 'Empire' Star Taraji P. Henson Twerk in a Teeny Bikini! 4inkjets coupon code 20% off cartridges. Johnny Depp Could Face 10 Years in Prison for Smuggling His Dogs Into Australia. Johnny Depp, international Yorkie bandit (Pacific Coast News) After more than two decades as a Hollywood bad boy, who'd have ever expected what could potentially land Johnny Depp in the slammer is taking his cute wootie patootie Yorkshire terriers to the groomer? 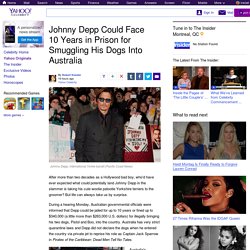 But life can always take us by surprise. During a hearing Monday, Australian governmental officials were informed that Depp could be jailed for up to 10 years or fined up to $340,000 (a little more than $263,000 U.S. dollars) for illegally bringing his two dogs, Pistol and Boo, into the country. Australia has very strict quarantine laws and Depp did not declare the dogs when he entered the country via private jet to reprise his role as Captain Jack Sparrow in Pirates of the Caribbean: Dead Men Tell No Tales. Taylor Swift, Beyoncé and the Most Powerful Women in Entertainment.

The women in entertainment on Forbes’ list of The World’s Most Powerful Women are the performers, tastemakers, executives and entrepreneurs who are making an impact. 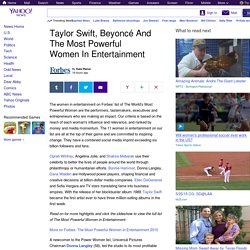 Our criteria is based on the reach of each woman's influence and relevance, and ranked by money and media momentum. The 11 women in entertainment on our list are all at the top of their game and are committed to inspiring change. They have a combined social media imprint exceeding six billion followers and fans. Oprah Winfrey, Angelina Jolie, and Shakira Mebarak use their celebrity to better the lives of people around the world through philanthropy or humanitarian efforts. Bonnie Hammer, Donna Langley, Dana Walden are Hollywood power players, shaping financial and creative decisions at billion-dollar media companies. Read on for more highlights and click the slideshow to view the full list of The Most Powerful Women in Entertainment: More on Forbes: The Most Powerful Women In Entertainment 2015. 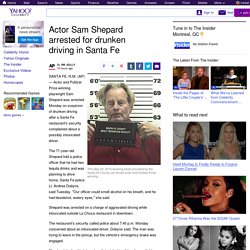 (AP) — Actor and Pulitzer Prize-winning playwright Sam Shepard was arrested Monday on suspicion of drunken driving after a Santa Fe restaurant's security complained about a possibly intoxicated driver. The 71-year-old Shepard told a police officer that he had two tequila drinks and was planning to drive home, Santa Fe police Lt. Andrea Dobyns said Tuesday. "Our officer could smell alcohol on his breath, and he had bloodshot, watery eyes," she said. Shepard was arrested on a charge of aggravated driving while intoxicated outside La Choza restaurant in downtown. The restaurant's security called police about 7:45 p.m. Shepherd declined to take a breath test, but he did perform a field sobriety test, which he failed, Dobyns said. View gallery FILE - In this Sept. 29, 2011 file photo, Sam Shepard poses for a portrait in New York. 4inkjets coupon code 20% off sales inkjets. Praised Be, Lord Scott Disick Is Now 32. Happy birthday Scott! 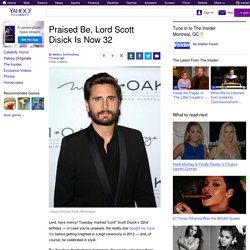 (WireImage) Lord, have mercy! Tuesday marked "Lord" Scott Disick's 32nd birthday — in case you're unaware, the reality star bought his royal title before getting knighted in a legit ceremony in 2012 — and, of course, he celebrated in style. Per Kourtney Kardashian's Instagram, the couple, who have three children together, spent the weekend partying in Las Vegas, as pretty much every member of the Kardashian clan does. 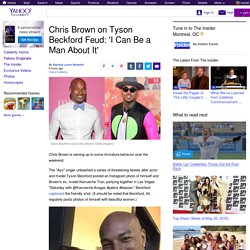 The "Ayo" singer unleashed a series of threatening tweets after actor and model Tyson Beckford posted an Instagram photo of himself and Brown's ex, model Karrueche Tran, partying together in Las Vegas. "Saturday with @Karrueche #vegas #palms #blasian," Beckford captioned the friendly shot. (It should be noted that Beckford, 44, regularly posts photos of himself with beautiful women.) (Instagram) Shia LaBeouf Is Emceeing an Art Show Now. Shia LaBeouf (Vimeo) He's run a #metamarathon, he's apologized, and he's let you listen to his heart beat. 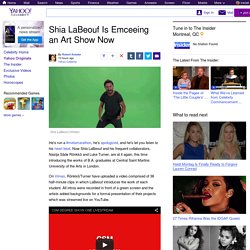 Now Shia LaBeouf and his frequent collaborators, Nastja Säde Rönkkö and Luke Turner, are at it again, this time introducing the works of B.A. graduates at Central Saint Martins University of the Arts in London. On Vimeo, Rönkkö/Turner have uploaded a video comprised of 36 half-minute clips in which LaBeouf introduces the work of each student. All intros were recorded in front of a green screen and the artists added backgrounds for a formal presentation of their projects which was streamed live on YouTube. Central Saint Martins is world-renowned for its art and design education programs. Arts & EntertainmentShia LaBeouf. 4inkjets coupon code 20% Save extra offers printers. Kylie Jenner Has Some Questions About Chemtrails. Kylie Jenner has some questions about chemtrails (Flickr/Instagram) If Kim Kardashian is Mother Gaia and Khloé Kardashian is your kooky aunt, then Kylie Jenner is your weird cousin who won't stop asking if jet fuel can melt steel beams on Facebook. 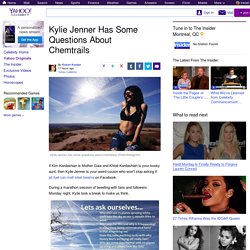 During a marathon session of tweeting with fans and followers Monday night, Kylie took a break to make us think. The (poorly spelled) image she posted asks questions common amongst those familiar with the chemtrails movement, a group of people who believe either the government or the Illuminati (depending who you ask) is spreading chemicals used to brainwash the population using the contrails formed by airplanes.

Whos is responcible, indeed. As far as conspiracy theories go, chemtrails is one of the least dangerous and most easily debunked. Jim Bob Duggar Once Said Incest Should Be a Capital Crime. The Duggar family (TLC) The Duggars are eating some of their words right about now. 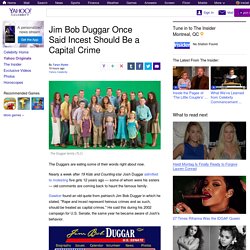 Nearly a week after 19 Kids and Counting star Josh Duggar admitted to molesting five girls 12 years ago — some of whom were his sisters — old comments are coming back to haunt the famous family. 4inkjets coupon code 20% sales on ink cartridges.