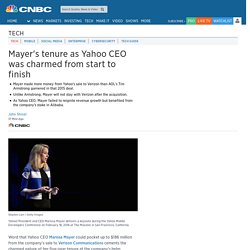 President and CEO Marissa Mayer delivers a keynote during the Yahoo Mobile Developers Conference on February 18, 2016 at The Masonic in San Francisco, California. Marissa Mayer to make $184m from Yahoo's sale to Verizon. Image copyright AFP Yahoo's chief executive, Marissa Meyer, will be paid $184m when the sale of her company to Verizon completes this year. 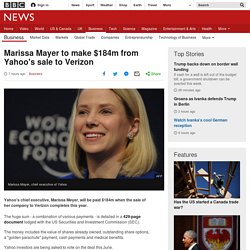 The huge sum - a combination of various payments - is detailed in a 429-page document lodged with the US Securities and Investment Commission (SEC). The money includes the value of shares already owned, outstanding share options, a "golden parachute" payment, cash payments and medical benefits. Yahoo investors are being asked to vote on the deal this June. The total payments to Ms Mayer are far higher than the company first acknowledged last month when it explained that she would be entitled to the "golden parachute" payment for losing her job. Ms Mayer will leave the company when the sale goes through. The deal with Verizon was first announced last year when the struggling company, agreed to sell its main internet business to Verizon, the huge US telecoms company, for $4.8bn. 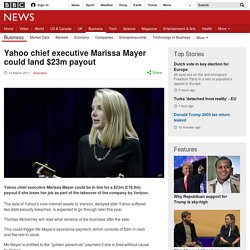 The sale of Yahoo's core internet assets to Verizon, delayed after Yahoo suffered two data security breaches, is expected to go through later this year. Thomas McInerney will lead what remains of the business after the sale. This could trigger Ms Mayer's severance payment, which consists of $3m in cash and the rest in stock. Ms Mayer is entitled to the "golden parachute" payment if she is fired without cause by Yahoo. When the takeover deal was announced last year, she said: "For me personally, I'm planning to stay.

"It's important for me to see Yahoo into its next chapter. " Mr McInerney will lead the financial holding company that remains, which has the provisional name of Altaba. The company still faces lawsuits relating to the breach. Yahoo punishes CEO in latest fallout from security breakdown. Yahoo is punishing CEO Marissa Mayer and parting ways with its top lawyer for the mishandling of two security breaches that exposed the personal information of more than 1 billion users and already have cost the company $350 million. 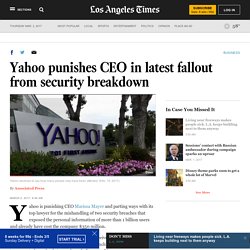 Mayer won't be paid her annual bonus nor receive a potentially lucrative stock award because a Yahoo investigation concluded her management team reacted too slowly to one breach discovered in 2014. Yahoo's general counsel, Ronald Bell, resigned without severance pay for his department's lackadaisical response to the security lapses. Alex Stamos, Yahoo's top security officer at the time of the 2014 breach, left the company in 2015. Although Yahoo's security team uncovered evidence that a hacker backed by an unnamed foreign government had pried into user accounts in 2014, executives "failed to act sufficiently" on that knowledge, according to the results of an internal investigation disclosed Wednesday. Nasty Gal, once a fashion world darling, is now bankrupt. It's Not Just Marissa: Yahoo Has a History of Troubled CEOs. The job of Yahoo CEO might as well be cursed. 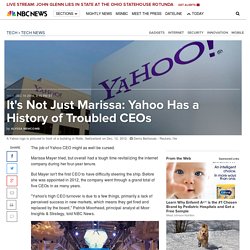 Marissa Mayer tried, but overall had a tough time revitalizing the internet company during her four-year tenure. But Mayer isn't the first CEO to have difficulty steering the ship. Before she was appointed in 2012, the company went through a grand total of five CEOs in as many years. "Yahoo's high CEO turnover is due to a few things, primarily a lack of perceived success in new markets, which means they get fired and replaced by the board," Patrick Moorhead, principal analyst at Moor Insights & Strategy, told NBC News. Mayer’s ‘Plan to Stay’ Means Finding Home for Rest of Yahoo. Marissa Mayer’s work at Yahoo! 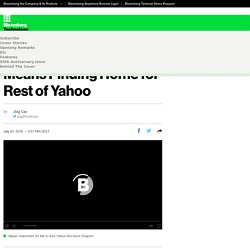 Inc. -- or what’s left of it -- is far from over. Moments after announcing plans to sell Yahoo’s core assets to Verizon for $4.83 billion, she sent a note telling employees she’s not going anywhere for the time being. “I plan to stay, I love Yahoo,’’ Mayer reiterated on a call with analysts and investors. “For the immediate future, I have two priorities: obviously, seeing the transaction through to closing and protecting the value in our equity stakes.’’ The end of Yahoo: Why Verizon spent big. Image copyright Getty Images Yahoo was the first website I ever visited. 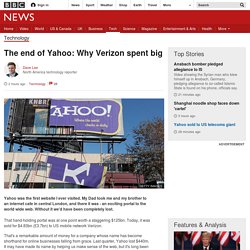 My Dad took me and my brother to an internet cafe in central London, and there it was - an exciting portal to the world wide web. Without it we'd have been completely lost. That hand-holding portal was at one point worth a staggering $125bn. Today, it was sold for $4.83bn (£3.7bn) to US mobile network Verizon. Verizon 'agrees $5bn Yahoo deal' What will stop Tumblr's tumble? Image copyright Noam Galai Three years have passed since Yahoo bought Tumblr, but the micro-blogging website has not proved to be the goldmine once hoped. 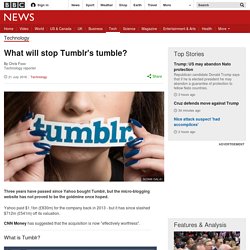 Yahoo paid $1.1bn (£830m) for the company back in 2013 - but it has since slashed $712m (£541m) off its valuation. CNN Money has suggested that the acquisition is now "effectively worthless". What is Tumblr? Image copyright Tumblr Tumblr is a social network where members can post almost anything - photos, audio clips, videos, animations, feature-length text posts and more. It was set up in 2007 and brings together a staggering breadth of content, including craft tutorials, clips of TV programmes, mental health support groups, political satire, naked selfies, funny cat pictures and hardcore pornography. Members follow people who post the type of content they enjoy, and can repost items they like on to their own page, providing fertile ground for in-jokes and memes to go viral.

Yahoo Edges Toward Its Sale With a Limp. Photo SAN FRANCISCO — As accepted the final bids for its core business on Monday, the internet company revealed just how badly that business was deteriorating. 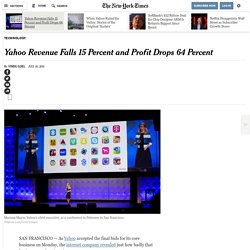 Yahoo said that its revenue in the second quarter fell 15 percent, after excluding accounting adjustments, and its operating profit fell 64 percent. Yahoo begins taking its last lap. When Yahoo (YHOO) issues its latest earnings report after Monday's market closes, it'll probably be its last one as an independent company. 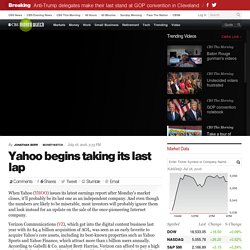 And even though the numbers are likely to be miserable, most investors will probably ignore them and look instead for an update on the sale of the once-pioneering Internet company. Yahoo (YHOO) investors cast 100 million votes against Marissa Mayer's board seat — Quartz. After living online for the past three decades, first as a pioneer in a rather wild empty quarter, and then later as a builder who constructed parts of this new continent, my confidence in inevitability is based on the depth of these technological changes. The daily glitter of high-tech novelty rides upon slow currents. The roots of the digital world are anchored in the physical needs and natural tendencies of bits, information, and networks. No matter what geography, no matter what companies, no matter what politics, these fundamental ingredients of bits and networks will hatch similar results again and again.

Their inevitability stems from their basic physics. I endeavor to expose these roots of digital technology because from them will issue the enduring trends in the next three decades. Our first impulse when we confront extreme technology surging forward in this digital sphere may be to push back. Change is inevitable. Yahoo’s Core Exposes Hollow Value Case.