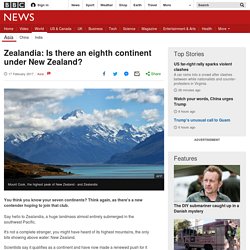 Think again, as there's a new contender hoping to join that club. Say hello to Zealandia, a huge landmass almost entirely submerged in the southwest Pacific. It's not a complete stranger, you might have heard of its highest mountains, the only bits showing above water: New Zealand. Scientists say it qualifies as a continent and have now made a renewed push for it to be recognised as such. In a paper published in the Geological Society of America's Journal, researchers explain that Zealandia measures five million sq km (1.9m sq miles) which is about two thirds of neighbouring Australia. Image copyright GNS Some 94% of that area is underwater with only a few islands and three major landmasses sticking out above the surface: New Zealand's North and South Islands and New Caledonia. elevation above the surrounding area distinctive geology a well-defined areaa crust thicker than the regular ocean floor Image copyright ESA/NASA. 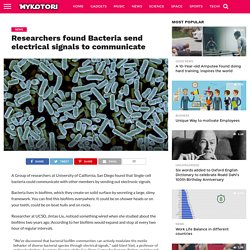 Bacteria lives in biofilms, which they create on solid surface by secreting a large, slimy framework. You can find this biofilms everywhere. Researcher at UCSD, Jintao Liu, noticed something wired when she studied about the biofilms two years ago. This study is totally different from the one that many scientists known for years. Furthermore, scientists discovered that they possess small pores i.e. ion channels in their membranes. What’s Up With That: Building Bigger Roads Actually Makes Traffic Worse. I grew up in Los Angeles, the city by the freeway by the sea. 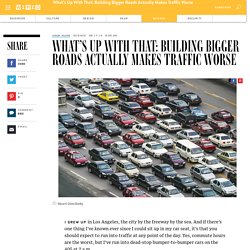 And if there’s one thing I’ve known ever since I could sit up in my car seat, it’s that you should expect to run into traffic at any point of the day. Yes, commute hours are the worst, but I’ve run into dead-stop bumper-to-bumper cars on the 405 at 2 a.m. As a kid, I used to ask my parents why they couldn’t just build more lanes on the freeway. Maybe transform them all into double-decker highways with cars zooming on the upper and lower levels. Except, as it turns out, that wouldn’t work. What's Up With That Each week, we'll explain the science behind a strange phenomenon that you may be wondering about, or may be hearing about for the first time right here. The concept is called induced demand, which is economist-speak for when increasing the supply of something (like roads) makes people want that thing even more. But before we get to the solutions, we have to take a closer look at the problem. Click to Open Overlay Gallery. 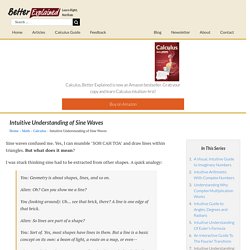 Yes, I can mumble "SOH CAH TOA" and draw lines within triangles. But what does it mean? I was stuck thinking sine had to be extracted from other shapes. A quick analogy: You: Geometry is about shapes, lines, and so on. Most math classes are exactly this. Argh! Let's build our intuition by seeing sine as its own shape, and then understand how it fits into circles and the like. Sine vs Lines Remember to separate an idea from an example: squares are examples of lines. Let's observe sine in a simulator (Email readers, you may need to open the article directly): Hubert will give the tour: Click start. Let's explore the differences with video: Linear motion is constant: we go a set speed and turn around instantly. A sin wave is basically drawing a circle. Calculating the surface area of a sphere. Huge Blocks!