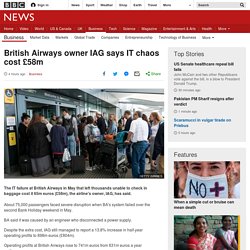 About 75,000 passengers faced severe disruption when BA's system failed over the second Bank Holiday weekend in May. BA said it was caused by an engineer who disconnected a power supply. Despite the extra cost, IAG still managed to report a 13.8% increase in half-year operating profits to 898m euros (£804m). Operating profits at British Airways rose to 741m euros from 631m euros a year earlier. IAG, which also owns Aer Lingus, Iberia and Vueling, said it expected operating profit for the whole of 2017 to show a double-digit percentage improvement. Revenue per passenger was up 1.5%, the first rise since 2014. 'Isolated event' British Airways says IT chaos was caused by human error. Image copyright Getty Images. 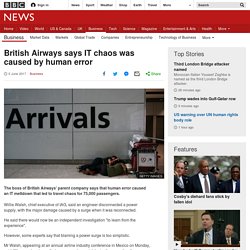 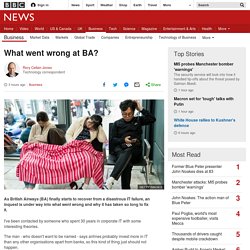 British Airways: Chaos continues at Heathrow. Media playback is unsupported on your device More than a third of British Airways flights from Heathrow were cancelled as thousands of passengers faced a second day of disruption. 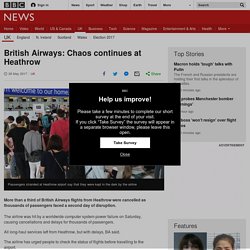 The airline was hit by a worldwide computer system power failure on Saturday, causing cancellations and delays for thousands of passengers. All long-haul services left from Heathrow, but with delays, BA said. The airline has urged people to check the status of flights before travelling to the airport. British Airways flight chaos lessens after weekend of disruption. Image copyright Getty Images British Airways is working to restore its computer systems after a power failure caused major disruption for thousands of passengers worldwide. 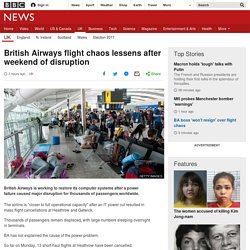 The airline is "closer to full operational capacity" after an IT power cut resulted in mass flight cancellations at Heathrow and Gatwick. Thousands of passengers remain displaced, with large numbers sleeping overnight in terminals. BA has not explained the cause of the power problem. So far on Monday, 13 short-haul flights at Heathrow have been cancelled.

Comma comeuppance: When rogue punctuation proves costly. Image copyright Getty Images A US dairy faces an overtime bill of about $10m (£8m), after a group of truck drivers won a pay dispute that hinged on some punctuation. 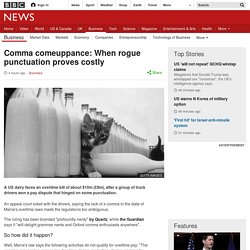 An appeal court sided with the drivers, saying the lack of a comma in the state of Maine's overtime laws made the regulations too ambiguous. The ruling has been branded "profoundly nerdy" by Quartz, while the Guardian says it "will delight grammar nerds and Oxford comma enthusiasts anywhere". So how did it happen? Well, Maine's law says the following activities do not qualify for overtime pay: "The canning, processing, preserving, freezing, drying, marketing, storing, packing for shipment or distribution of: (1) Agricultural produce; (2) Meat and fish products; and (3) Perishable foods. " Oscars Envelopegate: This is why both PwC accountants have been banned. Image copyright Getty Images Quite a few people are wondering why both of the accountants responsible for "envelopegate" at the Oscars have been sacked, when only one appeared to be responsible. 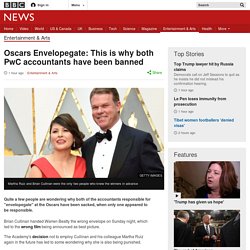 Brian Cullinan handed Warren Beatty the wrong envelope on Sunday night, which led to the wrong film being announced as best picture. The Academy's decision not to employ Cullinan and his colleague Martha Ruiz again in the future has led to some wondering why she is also being punished. Oscars 2017: Full coverage Now, one of the stage managers has explained. Gary Natoli told The Wrap that Ruiz was equally responsible for halting proceedings when the wrong winner was announced, but she failed to step in. Amazon typo knocked websites offline. Image copyright AFP Amazon has said that a simple typo was the cause of several high-profile websites and services being knocked offline earlier in the week. 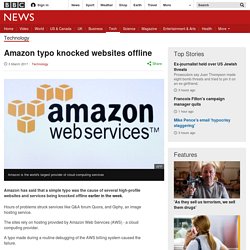 Hours of problems struck services like Q&A forum Quora, and Giphy, an image hosting service. The sites rely on hosting provided by Amazon Web Services (AWS) - a cloud computing provider. A typo made during a routine debugging of the AWS billing system caused the failure. "Unfortunately, one of the inputs to the command was entered incorrectly and a larger set of servers was removed than intended," Amazon said in an online statement. The error required a full restart that "took longer than expected". Around 150,000 websites and services rely on AWS. Among those affected by the failure was - somewhat ironically - Down Detector, a service that tracks downtime at major websites. Amazon, which is the world's largest provider of cloud services, says it is now making changes to help prevent a similar incident occurring in the future.

Massive Amazon cloud service outage disrupts sites. SAN FRANCISCO — Amazon didn't, quite, break the Internet Tuesday but a more than four-hour problem at one of the main storage systems for its AWS cloud computing company did cause headaches for hundreds of thousands of websites across the United States. 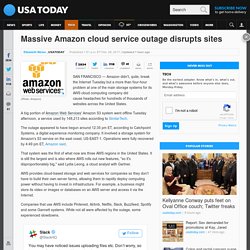 A big portion of ' Amazon S3 system went offline Tuesday afternoon, a service used by 148,213 sites according to SimilarTech. The outage appeared to have begun around 12:35 pm ET, according to Catchpoint Systems, a digital experience monitoring company. It involved a storage system for Amazon's S3 service on the east coast, US-EAST-1. Operations were fully recovered by 4:49 pm ET, Amazon said.

That system was the first of what now are three AWS regions in the United States. AWS provides cloud-based storage and web services for companies so they don’t have to build their own server farms, allowing them to rapidly deploy computing power without having to invest in infrastructure. Is used by businesses both large and small. Power outage at Delta causes flight cancellations, delays. BT fault hits broadband users and banks. Image copyright Getty Images Many of BT's customers have experienced problems with its broadband services. 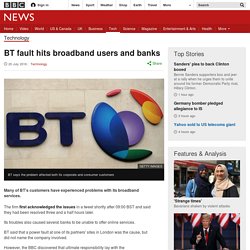 The firm first acknowledged the issues in a tweet shortly after 09:00 BST and said they had been resolved three and a half hours later. Its troubles also caused several banks to be unable to offer online services. BT said that a power fault at one of its partners' sites in London was the cause, but did not name the company involved. However, the BBC discovered that ultimate responsibility lay with the California-based data centre operator Equinix.

Fire drill knocks ING bank's data centre offline. Image copyright Thinkstock A fire extinguisher test in a bank's data centre has gone wrong in an "unprecedented" manner, causing its cash machines, online banking operations and website to go offline. For much of Saturday, ING's Romanian customers could not access their money. The bank said the discharge of its gas-based fire suppression system had caused "unexpected" damage to its computer servers.