What Does Cold Sound Like? See If Your Ear Can Tell Temperature. Can you hear the difference between hot and cold? 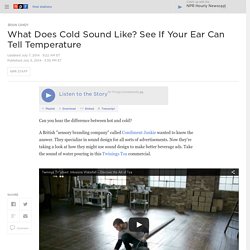 A British "sensory branding company" called Condiment Junkie wanted to know the answer. They specialize in sound design for all sorts of advertisements. Now they're taking a look at how they might use sound design to make better beverage ads. Take the sound of water pouring in this Twinings Tea commercial. This Twinings commercial is supposed to make you want a hot cup of tea. YouTube The marketers wanted to know: Would it be possible to make that noise itself more appealing? So they did an experiment. So, can you hear the difference? Glass 1 Glass 1: Hot Or Cold? Military rebreather test. Machine turns sweat into drinking water for Unicef. 18 July 2013Last updated at 11:53 ET The sweat-extraction machine was developed to promote a campaign by Unicef in Sweden A machine that takes sweat-laden clothes and turns the moisture into drinking water is in use in Sweden. 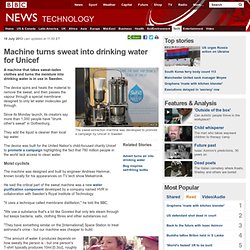 The device spins and heats the material to remove the sweat, and then passes the vapour through a special membrane designed to only let water molecules get through. Since its Monday launch, its creators say more than 1,000 people have "drunk other's sweat" in Gothenburg. They add the liquid is cleaner than local tap water. The device was built for the United Nation's child-focused charity Unicef to promote a campaign highlighting the fact that 780 million people in the world lack access to clean water. 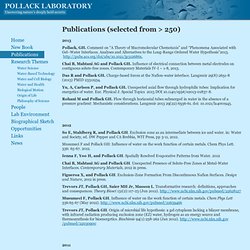 Comment on “A Theory of Macromolecular Chemotaxis” and “Phenomena Associated with Gel–Water Interfaces. Analyses and Alternatives to the Long-Range Ordered Water Hypothesis”2013. Chai B, Mahtani AG and Pollack GH. Influence of electrical connection between metal electrodes on contiguous solute-free zones. Contemporary Materials IV-I – 1-8, 2013. Das R and Pollack GH. Filter turns filthy water drinkable Michael Pritchard. Dip your hand in molten lead without being burned! One Photon Can Be Converted Into Multiple Electrons. Clean Power Published on February 25th, 2013 | by James Ayre A new discovery by researchers at the ICFO has revealed that graphene is even more efficient at converting light into electricity than previously known. 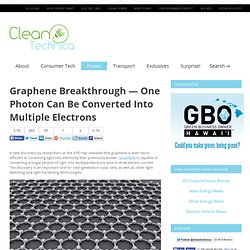 Graphene is capable of converting a single photon of light into multiple electrons able to drive electric current. The discovery is an important one for next-generation solar cells, as well as other light-detecting and light-harvesting technologies. A paradigm shift in the materials industry is likely within the near-future as a variety of unique materials replaces those that we commonly use today, such as plastics. “In most materials, one absorbed photon generates one electron, but in the case of graphene, we have seen that one absorbed photon is able to produce many excited electrons, and therefore generate larger electrical signals,” says Frank Koppens, group leader at ICFO.

The new research was just published in the journal Nature Physics. About the Author. Cutting through the fog. Preventing glass from fogging or frosting up is a longstanding challenge with myriad applications: eyeglasses, cameras, microscopes, mirrors and refrigerated displays, to name but a few. 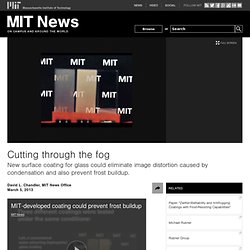 While there have been many advances in meeting this challenge, so far there has been no systematic way of testing different coatings and materials to see how effectively they work under real-world conditions. Now, a team of MIT researchers has developed such a testing method, and used it to find a coating that outperforms others not only in preventing foggy buildups, but also in maintaining good optical properties without distortion. The new approach is detailed in a paper in the journal ACS Nano, written by Michael Rubner, the TDK Professor of Polymer Materials Science and Engineering; Robert Cohen, the Raymond A. and Helen E. St. Laurent Professor of Chemical Engineering; doctoral student Hyomin Lee; and recent MIT graduate Maria Alcaraz. 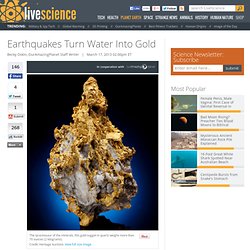 Water in faults vaporizes during an earthquake, depositing gold, according to a model published in the March 17 issue of the journal Nature Geoscience. The model provides a quantitative mechanism for the link between gold and quartz seen in many of the world's gold deposits, said Dion Weatherley, a geophysicist at the University of Queensland in Australia and lead author of the study. When an earthquake strikes, it moves along a rupture in the ground — a fracture called a fault. Big faults can have many small fractures along their length, connected by jogs that appear as rectangular voids. Water often lubricates faults, filling in fractures and jogs. About 6 miles (10 kilometers) below the surface, under incredible temperatures and pressures, the water carries high concentrations of carbon dioxide, silica and economically attractive elements like gold.

Shake, rattle and gold. Geckskin adhesive can hold a 700-pound object to a wall. Geckskin Does Some Heavy Lifting! Mystery of Prince Rupert's Drop at 130,000 fps - Smarter Every Day 86. Filtering water out of coca cola. When Water Flows Uphill.