Things that make you smile

Doctor Saves Baby's Life. 30 Years Later, the Favor Is Returned. This story is being featured as part of our “Yahoo Best Stories of 2015” series. 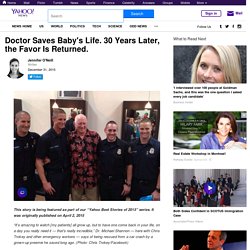 It was originally published on April 2, 2015 “It’s amazing to watch [my patients] all grow up, but to have one come back in your life, on a day you really need it — that’s really incredible,” Dr. Michael Shannon — here with Chris Trokey and other emergency workers — says of being rescued from a car crash by a grown-up preemie he saved long ago. (Photo: Chris Trokey/Facebook) Thirty-plus years ago, San Clemente, Calif. doctor Michael Shannon worked tirelessly to keep a premature 3.2-pound baby alive after the boy was given a 50 percent chance of survival. The duo’s latest reunion – four years to the day of their dramatic encounter – at a fundraiser for the childhood cancer research charity St.

“I do believe that things are supposed to happen when they do,” Shannon tells Yahoo Parenting about the miraculous coincidence that it was Trokey who saved his life. Shannon’s vehicle was destroyed in the 2011 wreck. Loneliness in Waitrose. My wife called me and asked me to pop into Waitrose to get some organic food. 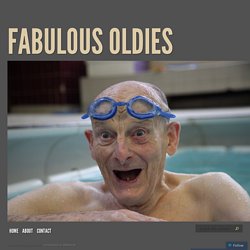 As I was leaving, I walked into the wonderful new cafe area. I noticed someone dressed very smart. He was a fabulous gentleman dressed immaculately with a tie and a checkered blazer. He had a small white moustache and nicely combed hair. He looked like a very famous British TV personality from the 60’s, 70’s and 80’s – Alan Whicker. I thought, how nice to see a gentleman looking so dapper, and continued walking out to my car. Friends. Mutual Pillow. Christian the lion. We all have powers. Ittle girl playing in the rain. When Kids Meet Their Football Idols. Little Boy Stops Game to Say I Love You to Coach. Don't worry about it. We will win next time. MY FAV BEST SOLDIERS COMING HOME MOMENTS. Dads. HUSBAND SHOCKS WIFE WITH PREGNANCY ANNOUNCEMENT! FELIZ DIA DEL PADRE - HAPPY FATHER'S DAY ..... HOMENAJE AL PADRE ....EL MEJOR... Things that make you Smile. 'Dancing Man' Sean O'Brien parties in Los Angeles. A British man who attracted global support after "fat-shaming" images of him were posted online has attended a party in his honour in Los Angeles. 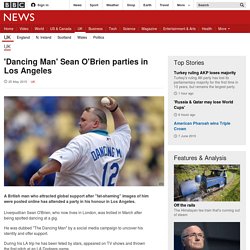 Liverpudlian Sean O'Brien, who now lives in London, was trolled in March after being spotted dancing at a gig. He was dubbed "The Dancing Man" by a social media campaign to uncover his identity and offer support. During his LA trip he has been feted by stars, appeared on TV shows and thrown the first pitch at an LA Dodgers game. Campaigner Monica Lewinsky, musicians Andrew WK and Moby attended his party, while Pharrell Williams recorded a special video message of support that was played at the party. Mr O'Brien's story has become popular in the US after the social media campaign brought his story to the public's attention. Pictures of him dancing and then looking upset after he was mocked were posted online, first on message board 4chan and then to the website Reddit.

This is one way to eat nutella. Curious friends. Let's walk together. New Robinsons TV Advert - Thanks Dad. My brothers and I giving my dad a Fathers Day gift. 6-year-old orphan receives a gift from Red Cross in 1946. There are good people in the world. Little girl and baby lama. Happiness in simple things. The rainbow shop. Majestic photo. Enjoying the simple things in life. The ATM of happiness. YouTube Coca-Cola set up an ATM in Spain that dispatched 100 euros ($131), asking only that the recipients spend the money on someone else. 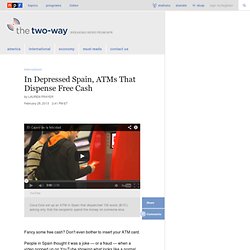 Fancy some free cash? Don't even bother to insert your ATM card. People in Spain thought it was a joke — or a fraud — when a video popped up on YouTube showing what looks like a normal ATM, offering 100 euros ($131) for free — without a bank card. It seemed too good to be true. There was one catch: Recipients had to promise to share the money. It turns out the ATM video was a stunt by Coca-Cola, part of the company's "Open Happiness" campaign, which also debuted a hidden camera-themed ad in the U.S. during the Super Bowl.

Dubbed the "ATM of Happiness," the machine aims to spread a little goodwill, and much-needed cash, in crisis-stricken Spain. Spain is suffering a third consecutive year of recession. The "ATM of Happiness" may be a corporate ad campaign, but it does have Spaniards smiling and reaching out to help their neighbors.