Axe Deodorant Targets Losers. Marketers go to incredible lengths to learn everything about the consumer, especially with millions of dollars on the line. 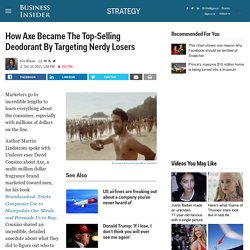 Ten Charts That Will Have You Rethinking Tesla's Model 3. It was the night of the unveiling. 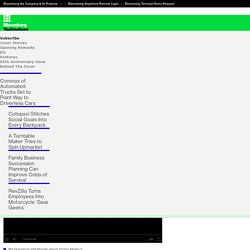 Nineteen minutes into his big talk, Elon Musk finally revealed what everyone had come to see. Three of Tesla Motor Inc.’s Model 3 prototypes rolled onto stage. But it was the next revelation that brought the house down: Tesla had already taken in more than 115,000 reservations that day, each with a $1,000 deposit—sight unseen. Tesla Motors' $30 Billion Question: Can Model 3 Outdo Big Car Brands? Tesla Motors (TSLA) will unveil its mass-market Model 3, the grail-quest of its electric car lineup on Thursday night. 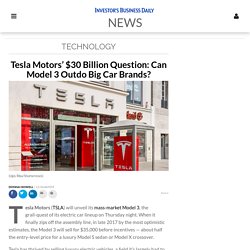 When it finally zips off the assembly line, in late 2017 by the most optimistic estimates, the Model 3 will sell for $35,000 before incentives — about half the entry-level price for a luxury Model S sedan or Model X crossover. Tesla has thrived by selling luxury electric vehicles, a field it’s largely had to itself. But can Tesla expand from a niche player to produce great cars at scale cheaply enough, while a slew of mass-market rivals can afford to sell EVs at a loss? Investor bullishness about the Model 3 has helped push up Tesla’s market capitalization above $30 billion, almost six times the California startup’s annual revenue. 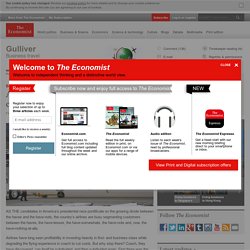 Airlines have long seen profitability in investing heavily in first- and business-class while degrading the flying experience in coach to cut costs. But why stop there? McDonald's Next. How Volkswagen Got Away With Diesel Deception. Meg Whitman Seeks Reinvention for HP as It Prepares for Split. Photo PALO ALTO, Calif. — When , ’s chief executive, was preparing to cleave her company in two, she feared reliving a shoe disaster from early in her career. 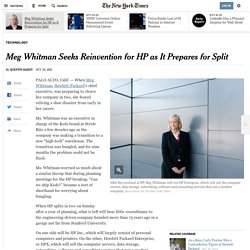 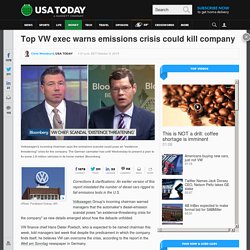 The German carmaker has until Wednesday to present a plan to fix some 2.8 million vehicles in its home market. Bloomberg Corrections & clarifications: An earlier version of this report misstated the number of diesel cars rigged to fail emissions tests in the U.S. Volkswagen Group's incoming chairman warned managers that the automaker's diesel-emission scandal poses "an existence-threatening crisis for the company" as new details emerged about how the debacle unfolded. VW finance chief Hans Dieter Poetsch, who is expected to be named chairman this week, told managers last week that despite the predicament in which the company finds itself, he believes VW can overcome the crisis, according to the report in the Welt am Sonntag newspaper in Germany.

The crisis, which has wiped out $34 billion in the company's value as shares have fallen, stems from the disclosure by the U.S. Jack Dorsey Returns to a Frayed Twitter. Photo At 7:45 a.m. on Oct. 15, 2008, Jack Dorsey was called to a meeting at The Clift Hotel in San Francisco. 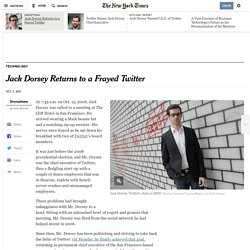 Alaska Airline Loses Its Own CEO Brad Tilden's Luggage. Not even airline executives are safe from having a bad flight. 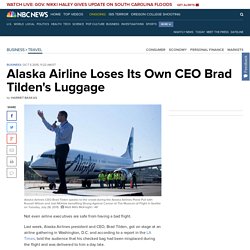 Last week, Alaska Airlines president and CEO, Brad Tilden, got on stage at an airline gathering in Washington, D.C. and according to a report in the LA Times, told the audience that his checked bag had been misplaced during the flight and was delivered to him a day late. It's happened before, too. The airline exec said the last time his airline misplaced his bag was 25 years ago. Alaska Airlines is one of the airlines that prides itself on its modern day baggage delivery rate. How Coca-Cola and Pepsi achieved global domination.

For years, we've known that soda is a major contributor to the obesity epidemic. 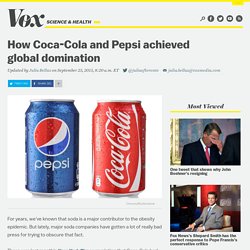 But lately, major soda companies have gotten a lot of really bad press for trying to obscure that fact. There was last month's New York Times revelation that Coca-Cola had been quietly funding researchers and organizations that diverted the conversation about obesity away from too many calories and toward the notion that people simply aren't exercising enough. This week, the company published on its website a list of all the external organizations it has funded over the past five years, to the tune of nearly $120 million.

Efficiency up, turnover down: Sweden experiments with six-hour working day. A Swedish retirement home may seem an unlikely setting for an experiment about the future of work, but a small group of elderly-care nurses in Sweden have made radical changes to their daily lives in an effort to improve quality and efficiency. 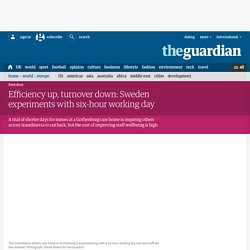 In February the nurses switched from an eight-hour to a six-hour working day for the same wage – the first controlled trial of shorter hours since a rightward political shift in Sweden a decade ago snuffed out earlier efforts to explore alternatives to the traditional working week. “I used to be exhausted all the time, I would come home from work and pass out on the sofa,” says Lise-Lotte Pettersson, 41, an assistant nurse at Svartedalens care home in Gothenburg. “But not now. I am much more alert: I have much more energy for my work, and also for family life.” At Svartedalens, the trial is viewed as a success, even if, with an extra 14 members of staff hired to cope with the shorter hours and new shift patterns, it is costing the council money.

Travelling to work 'is work', European court rules - BBC News. Time spent travelling to and from first and last appointments by workers without a fixed office should be regarded as working time, the European Court of Justice has ruled. This time has not previously been considered work by many employers. It means firms including those employing care workers, gas fitters and sales reps may be in breach of EU working time regulations.

BBC legal correspondent Clive Coleman said it could have a "huge effect". Inside Amazon: Wrestling Big Ideas in a Bruising Workplace. Amazon may be singular but perhaps not quite as peculiar as it claims. It has just been quicker in responding to changes that the rest of the work world is now experiencing: data that allows individual performance to be measured continuously, come-and-go relationships between employers and employees, and global competition in which empires rise and fall overnight. Amazon is in the vanguard of where technology wants to take the modern office: more nimble and more productive, but harsher and less forgiving. 2015 US Committe report on Airline Fees. Tesla Motors Inc (TSLA) CEO Teaser Tweets Doing Wonders For The Company.

Not many individuals have the capability to influence stock price by just a Tweet, but Tesla Motors Inc (NASDAQ:TSLA) CEO Elon Musk has proved many a times that he can do just that. On Monday, Mr. Musk once again used his Twitter platform to announce a suspense release of a new product line by the end of April, which would not be a car. Many auto analysts believe, including the ones at Global Equities Research and Bank of America/ Merrill Lynch, that the new product line will be a stationary residential battery pack, which the company announced in February last month at Tesla's fourth quarter earnings call.

The Tweets jolted Wall Street investors, sending Tesla stock up 3% following the announcement in just 24 hours, boosting the market cap by nearly $1 billion, according to Market Watch. This teaser Tweet was re-Tweeted more than 6,500 times, and favorited more than 5,000 times among 1.87 million Elon Musk's followers. Software: How Tesla stands apart in car world. A sign is posted at a Tesla showroom on in Palo Alto, California. (Photo by Justin Sullivan/Getty Images) Once again, Tesla Motors came away from one of its press announcement extravaganzas looking like the leader of the pack when it comes to putting its emphasis on software, not just hardware, to innovate in the automotive space. Facebook rolls out feature for users when they die. 12 February 2015Last updated at 10:49 ET Grieving relatives can find comfort from visiting loved ones' Facebook pages Facebook has added a new setting that gives users the option of having their account permanently deleted when they die.

Or, if they wish, they can choose to appoint a friend or family member to take control of some aspects of the account after their death. Girl fired on Twitter. Has the imagination disappeared from Lego? Inside Elon Musk's $1.4 billion score. The crazy, real-life story of how the CEO of electric-car maker Tesla dazzled, seduced, squeezed, bluffed, manipulated, and prodded his way to epic state incentives to build a massive battery plant in the Nevada desert. It’s hard to overstate the mystique surrounding Elon Musk these days. Facebook building 'workplace network' eBay to split off PayPal online payment business. 30 September 2014Last updated at 11:11 ET. Valve: How going boss-free empowered the games-maker. Ebay to buy Shutl as it aims for one-hour delivery in UK. 23 October 2013Last updated at 07:41 ET.

Michelin to Shut 2 Tire Plants. Gapminder: Unveiling the beauty of statistics for a fact based world view. Now You Can Buy 3D Printers From Staples. Mexico Congress passes sweeping telecoms bill. How the CIA Helped Disney Conquer Florida. Why 3 MIT Grads Want to Send You an Empty Box. Online news is becoming easier to sell, suggests study. I hired someone with Asperger's. The Decline And Fall Of Flowtab, A Startup Story.