Making the world a better place

Scientific American Innocentive. The Dow Chemical Company is the leading producer of polyalkylene glycols (PAGs) used in synthetic fluids and lubricants where petroleum, animal and vegetable oil-based products do not provide the desired performance. 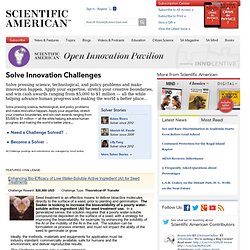 Recently Dow introduced a new generation of PAGs that are OIL-SOLUBLE. Unlike conventional water soluble and insoluble PAGs, “Oil-Sol PAGs” are miscible in hydrocarbon oils and provide other unique performance properties. Oil-Sol PAGs are demonstrating superior performance in industrial lubricants and increased energy efficiency in automotive applications. However, there is a vast array of other markets to explore, such as household cleaning, fabric conditioning, sunscreen, skin care, hair care, cosmetics, deodorant, pharmaceuticals, agriculture, marine, space, defense and more.

Solvers are challenged to present uses, formulations and chemical processing ideas that will accelerate commercialization of Oil-Sol PAGs in existing or new markets. Futuristic water-recycling shower cuts bills by over $1,000. Swedish designer Mehrdad Mahdjoubi has developed a shower that recycles waterOrbSys Shower saves more than 90% water and 80% energy while you washIt could save users over $1000 a year and help people living in areas with a shortage of water (CNN) -- In space, astronauts go for years without a fresh supply of water. 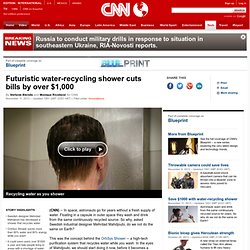 Floating in a capsule in outer space they wash and drink from the same continuously recycled source. So why, asked Swedish industrial designer Mehrdad Mahdjoubi, do we not do the same on Earth? This was the concept behind the OrbSys Shower -- a high-tech purification system that recycles water while you wash. Zeer Pot Fridge! Billboard converts desert air into drinking water. An advertising agency has created what it's calling the world's first billboard that converts air into drinking water. 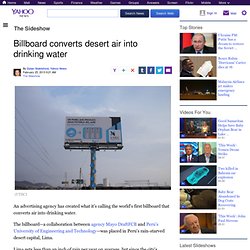 The billboard—a collaboration between agency Mayo DraftFCB and Peru's University of Engineering and Technology—was placed in Peru's rain-starved desert capital, Lima. Lima gets less than an inch of rain per year on average, but since the city's humidity hovers around 98 percent, generators attached to the structure are able to capture atmospheric moisture, filter it and produce potable water. The harvested water is then stored in 20-liter tanks and can be retrieved from taps at the base of the billboard. "Agua aqui," a neon display near the base reads. According to the university, the billboard produced 9,450 liters of drinking water in three months—enough to sustain hundreds of Peruvian families per month. Watch a short video explaining the project below: 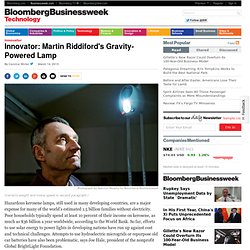 Poor households typically spend at least 10 percent of their income on kerosene, as much as $36 billion a year worldwide, according to the World Bank. ﻿ So far, efforts to use solar energy to power lights in developing nations have run up against cost and technical challenges. Attempts to use hydroelectric microgrids or repurpose old car batteries have also been problematic, says Joe Hale, president of the nonprofit Global BrightLight Foundation. Gravity could help. British industrial designer Martin Riddiford has created a pineapple-size lamp powered by a 25-pound weight that falls about six feet in a half-hour.

Riddiford, 57, a co-founder of London-based product design firm Therefore, got the idea four years ago after leaving a meeting with a charity interested in solar tech. GravityLight lighting for the developing countries. A $5 Lamp Powered Solely by Gravity. GravityLight harnesses the power of gravity to provide a realistic alternative to kerosene lamps. 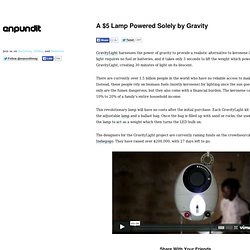 The $5 light requires no fuel or batteries, and it takes only 3 seconds to lift the weight which powers GravityLight, creating 30 minutes of light on its descent. There are currently over 1.5 billion people in the world who have no reliable access to mains electricity. Instead, these people rely on biomass fuels (mostly kerosene) for lighting once the sun goes down. Not only are the fumes dangerous, but they also come with a financial burden. The kerosene can eat away at 10% to 20% of a family’s entire household income. This revolutionary lamp will have no costs after the initial purchase. The designers for the GravityLight project are currently raising funds on the crowdsourcing platform Indiegogo.

Share With Your Friends. Alfredo Moser: Bottle light inventor proud to be poor. Alfredo Moser's invention is lighting up the world. 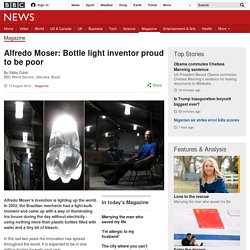 In 2002, the Brazilian mechanic had a light-bulb moment and came up with a way of illuminating his house during the day without electricity - using nothing more than plastic bottles filled with water and a tiny bit of bleach. In the last two years his innovation has spread throughout the world. It is expected to be in one million homes by early next year. So how does it work?

Simple refraction of sunlight, explains Moser, as he fills an empty two-litre plastic bottle. "Add two capfuls of bleach to protect the water so it doesn't turn green [with algae].