The Great Mysteries of Math - New HD Documentary. Why are so many smart people such idiots about philosophy? Why so many are alarmed by the ongoing controversy at Mount St. Mary’s. In rural Maryland, a battle is taking place over the future of religious colleges in the U.S. 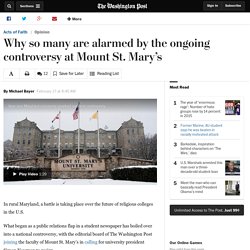 What began as a public relations flap in a student newspaper has boiled over into a national controversy, with the editorial board of The Washington Post joining the faculty of Mount St. Mary’s in calling for university president Simon Newman to resign. To recap: the student newspaper of Mount St. Mary’s, a Catholic liberal arts college in Emmitsburg, Md., published an article investigating efforts by university leaders to improve the school’s retention rate, a key metric used in rankings systems such as U.S.

News and World Report’s influential annual list. Why American Students Are Flocking to Germany — and Staying. BONN, Germany — How do you say "sign me up" in German? 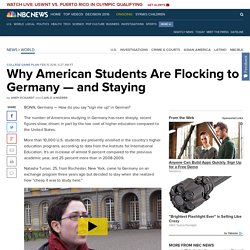 The number of Americans studying in Germany has risen sharply, recent figures show, driven in part by the low cost of higher education compared to the United States. More than 10,000 U.S. students are presently enrolled in the country's higher education programs, according to data from the Institute for International Education. It's an increase of almost 9 percent compared to the previous academic year, and 25 percent more than in 2008-2009. Natasha Turner, 25, from Rochester, New York, came to Germany on an exchange program three years ago but decided to stay when she realized how "cheap it was to study here. " She is now working on her master's degree in American Studies at the University of Bonn. MIT Dean Takes Leave to Start New University Without Lectures or Classrooms.

Christine Ortiz is the dean for graduate education and a professor of materials science and engineering at the Massachusetts Institute of Technology. 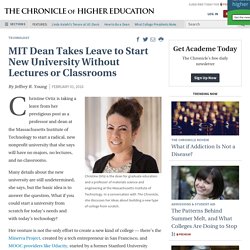 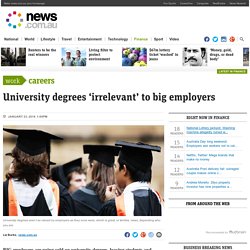 BIG employers are going cold on university degrees, leaving students and jobseekers to wonder if their qualifications are worth the investment and extra study. This week, international publishing house Penguin Random House decided to drop degrees as a requirement for job applicants, following in the footsteps of major consulting firms Ernst and Young and PricewaterhouseCoopers. The move comes as smaller employers are shifting away from hiring graduates or university students, believing kids are coming out of university with “no real skills” or simply being taught the wrong things. Teach Yourself Logic 2016: A Study Guide. Philosophy: Locke on Personal Identity Part 1. MIT's free online classes can carry credit. A Visual, Intuitive Guide to Imaginary Numbers. Imaginary numbers always confused me. 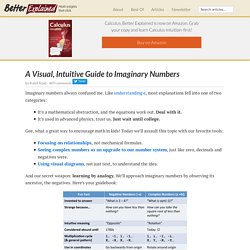 Like understanding e, most explanations fell into one of two categories: It’s a mathematical abstraction, and the equations work out. Debt by Degrees — ProPublica's College Scorecard. Hillary Clinton to unveil $350-billion plan to make college more affordable. Hillary Rodham Clinton outlined a plan Monday to slash student loan interest rates while aiming to guarantee students could attend college without needing to take out loans in the first place, tapping into an issue that has risen in prominence among Democrats. 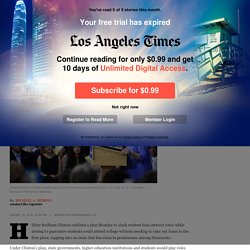 Under Clinton’s plan, state governments, higher education institutions and students would play roles alongside the federal government in addressing the affordability of higher education and the debt that can come from it. Privately educated graduates 'earn more' than state school colleagues - BBC News. Privately educated UK graduates in high status jobs earn more than their state school counterparts, says a study. 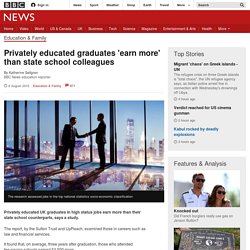 The report, by the Sutton Trust and UpReach, examined those in careers such as law and financial services. Teacher grade forecasts are 'too optimistic' - BBC News. Teachers are often too optimistic when predicting pupils' grades, suggests a new analysis of exam board data. 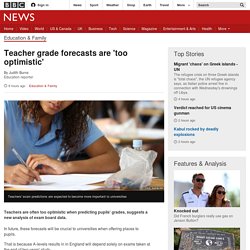 In future, these forecasts will be crucial to universities when offering places to pupils. That is because A-levels results in in England will depend solely on exams taken at the end of two years' study. The forecasts "will be the only thing universities will have to go on", said Cherry Ridgway of the Association of Teachers and Lecturers (ASCL). But the accuracy of teachers' forecasts is falling, the study suggests. The researchers compared GCSE and A-level results from the OCR board with predictions sent in by teachers just before the exams. Students doubt fees value for money - BBC News. Many students are unconvinced they have received value for money from their university courses, according to an annual survey. 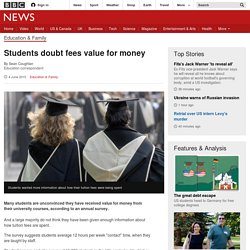 And a large majority do not think they have been given enough information about how tuition fees are spent. The survey suggests students average 12 hours per week "contact" time, when they are taught by staff. The findings are part of a survey of 15,000 students in the UK, carried out by higher education think tanks. The Student Academic Experience Survey, carried out by the Higher Education Policy Institute and the Higher Education Academy, examines levels of consumer satisfaction among undergraduate students. Information gap. How US students get a university degree for free in Germany - BBC News.

While the cost of college education in the US has reached record highs, Germany has abandoned tuition fees altogether for German and international students alike. 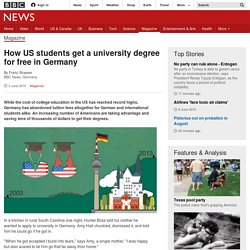 History of Philosophy without any gaps. Guide to a Ph.D. - the Edge of Knowledge. Open Textbooks. Cours en ligne / MOOC.