Defy Gravity with an Analog Motion Graphics Experiment. GIFs and screencaps by the author, via Ordinary objects elegantly and effortlessly defy gravity on the blank stage that is designer Clemens Wirth’s analog experiment, Gravity. 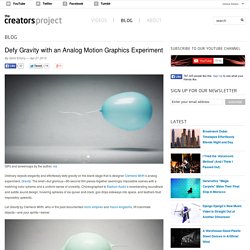 Imagine a school where playing video games is encouraged during classes and may even replace exams. 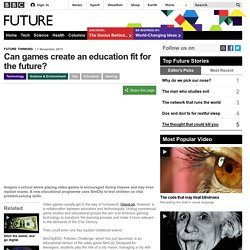 A new educational programme uses SimCity to test children on vital problem-solving skills. Video games usually get in the way of homework. GlassLab, however, is a collaboration between educators and technologists. Uniting commercial game studios and educational groups the aim is to embrace gaming technology to transform the learning process and make it more relevant to the demands of the 21st Century. They could even one day replace traditional exams. SimCityEDU: Pollution Challenge, which has just launched, is an educational version of the video game SimCity. BBC Future spoke to Jessica Lindl, general manager of GlassLab, at the Silicon Valley-based gaming company, EA (Electronic Arts) about how games could prepare children for jobs. eCAADe 2015 - 33rd Annual Conference 16th-18th September 2015. Gamasutra - The Art & Business of Making Games.

Virtuix Omni. Space Engineers on Steam. First off, I'd like to start out by saying that after I originally wasted nearly 26 bucks on minecraft (DO NOT BUY THAT GAME), I bought this game for just under 20 (should have bought when half off) and I got to say that "awesome" is the grandest of all understatement on a way to describe this game. 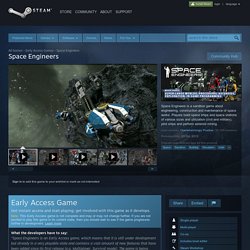 This game doesn't come without its early game problems though, which i have serveral ideas. 1. 2. Server lag.I feel that the multiplayer servers and the way everything is handled when sharing maps could be done more efficiently, so much lag and is very network intensive, i work with networking and computers and the way everything network in this game is being handled, is not doing so very efficiently, i'd have people join my maps, complain about the extreme lag, and leave, like clockwork. 3. 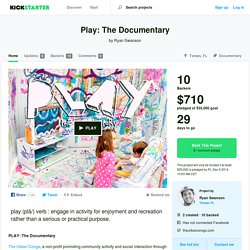 Flanagan, who has created original entertainment for networks such as Nickelodeon, Fox Sports, NASCAR, Coca Cola, and ESPN, to create a documentary about the importance of PLAY. "You can discover more about a person in an hour of play than in a year of conversation. " -Plato PLAY is such a simple concept, but people define it in many different ways. According to the National Institute for Play, some of the categories of play include: 1. 2. 3. 4. 5. 6. 7. Why us? The concept of play and film making runs strong in our crew. The Urban Conga A collective group of creators that provide underutilized spaces with interactive installations to provoke creativity, activity, and play.

A breakdown of film making costs: 2) Documentary Film Crew: in local cities we film in we will work with film crews to help cover our events... Kerbal Space Program. Serious Games International. Welcome to The Serious Games Institute. Neutral Digital. Work. Extraordinary Experiences. The best virtual reality videos and games that the VR community is making today. A virtual reality community for creatives and engineers that make VR content for virtually reality headsets.