The Pussification of the Internet - Marc Ensign. Facebook Login Is Everywhere These Days. Facebook Login is an easy way for developers to integrate an immediately recognizable login feature into their apps or Web site. 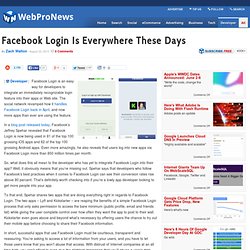 In an age of public conversations, ethical decision making and accurate communications are top of mind for the PR professional. 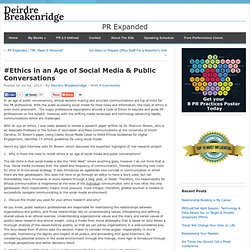 Make the most of Facebook Graph Search as a marketing tool. Jim Carrey: I Never Wanted to Take Your Guns Away. I disagree wholeheartedly with those who say that there are just too many guns out there to control and that more gun laws won't make a difference. 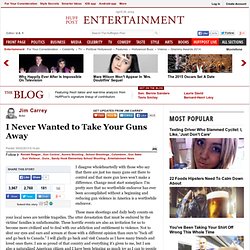 Change must start someplace. I'm pretty sure that no worthwhile endeavor has ever been accomplished without a beginning and reducing gun violence in America is a worthwhile endeavor. These mass shootings and daily body counts on your local news are terrible tragedies. What’s The Web Worth? It’s likely that the web has had an impact on your financial life (if not, well, enjoy the view from that cave). 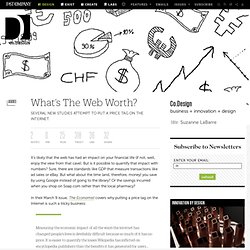 But is it possible to quantify that impact with numbers? Sure, there are standards like GDP that measure transactions like ad sales or eBay. But what about the time (and, therefore, money) you save by using Google instead of going to the library? Or the savings incurred when you shop on Soap.com rather than the local pharmacy? In their March 9 issue, The Economist covers why putting a price tag on the Internet is such a tricky business: Congresswoman Introduces Aaron’s Law. January 18, 2013. 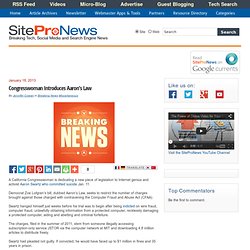 The New SEO. Although the use of keywords on website pages and in the anchor text of inbound links remains important for SEO, search engines are increasingly using a site’s branding, visitor behavior and social data. 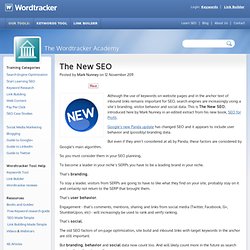 This is The New SEO, introduced here by Mark Nunney in an edited extract from his new book, SEO for Profit. Google's new Panda update has changed SEO and it appears to include user behavior and (possibly) branding data. But even if they aren’t considered at all by Panda, these factors are considered by Google's main algorithm. How I found the Facebook topic that was 371% more effective. I was a fat kid. 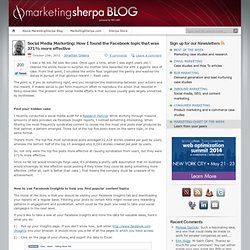 Fat kids like cake. Once upon a time, when I was eight years old, I cleaned the entire house to surprise my mother. Clueless officials hamper cybersecurity law-making. Governments need to determine the purpose of any proposed cybersecurity law and what problems it is supposed to address before approving the legislation. 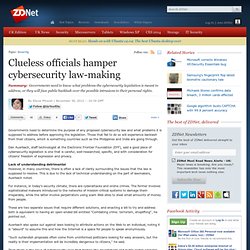 Meta Tag Generator. Colorful Street Art from My Recent Travels. Social Media For Business: Walk Before You Can Run. The Social Evolution of New Media. Stephen King’s 20 Tips for Becoming a Frighteningly Good Writer. Have you ever wished you could peer inside the mind of one of the greatest writers in the world and find out exactly what makes them tick? 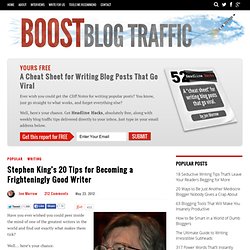 Well… here’s your chance. Stephen King has published 49 novels, all of them bestsellers. Facebook Launches a Standalone Camera App - Mike Isaac - Social. 40+ jQuery Plugins to Spice Up your Website. 3 Ways to Increase Website Traffic for a New Site. By Don Nicholas • 12/03/2012 Three or four times a year I get to help launch a new website. 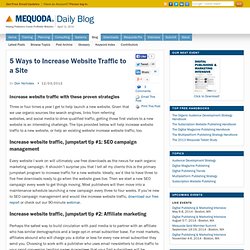 Given that we use organic sources like search engines, links from referring websites, and social media to drive qualified traffic, getting those first visitors to a new website is an interesting challenge. The tips provided below will help increase website traffic to a new website, or help an existing website increase website traffic, too. Increase website traffic, jumpstart tip #1: SEO campaign management Every website I work on will ultimately use free downloads as the nexus for each organic marketing campaign. Increase website traffic, jumpstart tip #2: Affiliate marketing. New iPad owners pay big dividends for Apple. FRAMINGHAM, Mass. - The iPad is giving Apple Inc. entree to millions of customers who have never purchased one of company's products before, a research firm said today. One-in-four buyers of the iPad tablet is new to Apple, said Ben Arnold , director of industry analysis at the NPD Group .

Interview: Avner Levin on international threats. RADIO ITWC Avner Levin, of the Ted Rogers School of Business, joins the podcast this week to talk about the problems surrounding enforcing security internationally This week, Avner Levin joins the podcast. Levin is the director of the privacy and cyber crime institute at the Ted Rogers School of Management, Ryerson University. He is speaking at SC Congress next week on the troubles of cross-border security threats.

Indentifying virus and attacks is hard in the same country they originate, and even harder when they cross the border. Next week, part two of our SC Congress podcasts airs with Winn Schwartau, another speaker at the event. Related Download. BlackBerry World opens with worries on RIM’s future. The annual conference will feature speeches and teasers on the upcoming BB10 operating system. Step-by-Step Guide to New Facebook Business Page Timelines. RIM’s Fusion will manage iOS, Android too - Page 1 - Communications Infrastructure. The struggling mobile device maker refocuses on the enterprise with a complement to BES that manages Apple and other mobile devices. How Fusion will add Balance, and why one CIO is cautiously optimistic Research in Motion Ltd. has announced an upcoming management platform allowing enterprises secure management of employees’ mobile devices on Apple Inc.’s iOS and Google Inc.’s Android platforms along with its own BlackBerry operating system.

BlackBerry Mobile Fusion will go into beta in January and be in general availability in March, Alan Panezic, vice-president of enterprise product management and marketing for Waterloo, Ont. New method proposed to strengthen PKI security. IASI, ROMANIA -- The Electronic Frontier Foundation (EFF) is proposing an extension to the current SSL chain of trust that aims to improve the security of HTTPS and other secure communication protocols. EFF's "Sovereign Keys" (SK) specification is designed to give domain owners control over the link between their domain names and their certificates after recent Certificate Authority (CA) compromises raised serious questions about the security of the entire Internet Public Key Infrastructure (PKI). One of the main problems with the current PKI model is the lack of control over CAs and their subsidiaries.