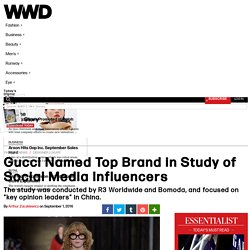 The 400 KOLs researched in the report included fashion influencers and celebrity bloggers on WeChat and Weibo. Global analytics firm Bomoda said the researchers selected the 25 luxury brands to be studied. Social media analytics for Gucci - Talkwalker. Tom Ford's Plan to Change Shopping for Good Starts Tonight. As the first luxury name to show a complete see-now, buy-now collection for Fall 2016, Ford is betting big that stylish people just want good clothes—without having to wait around for them. 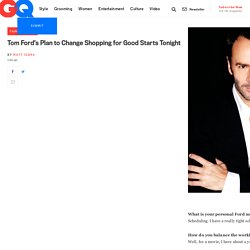 Tom Ford has never half-assed anything. If we're going by the designer's impeccable track record—where he creates some of the world's finest menswear season after season without fail—we're definitely led to believe he's not the type who ever phones it in. Oscar de la Renta's New Creative Directors Announced. A homecoming is underway at Oscar de la Renta. 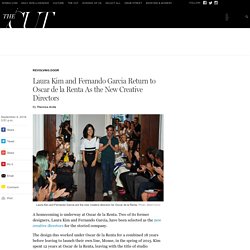 Two of its former designers, Laura Kim and Fernando Garcia, have been selected as the new creative directors for the storied company. The design duo worked under Oscar de la Renta for a combined 18 years before leaving to launch their own line, Monse, in the spring of 2015. Kim spent 12 years at Oscar de la Renta, leaving with the title of studio director, and Garcia spent six years there, leaving as senior designer. Their return follows the unexpected departure in July of Peter Copping, who was appointed to lead the company following de la Renta’s death in 2014. The return of the two designers was heralded by the company’s CEO as a family affair. Balmain CEO Confirms Acquisition by Qatar’s Mayhoola – WWD. PARIS — Backed by a powerful and seasoned owner, Balmain is poised to push into the handbag business, and speed expansion of its global store network. 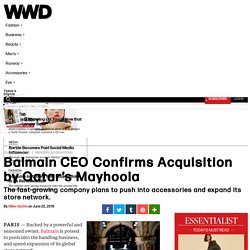 “There’s really a huge potential,” Balmain chief executive officer Emmanuel Diemoz told WWD in an exclusive interview Wednesday after Mayhoola for Investments, the Qatar-based parent of Valentino and Pal Zileri, said it had acquired a majority stake in the fast-growing Paris fashion house. The executive credited Olivier Rousteing’s “optimistic” and va-va-voom designs and rabid social media following among factors that sped the transaction. Diemoz has also steered the company through an explosive growth phase, while maintaining high profitability. Financial terms were not disclosed, and Diemoz declined to say if management participated in the transaction and sold their stakes. The deal is expected to close later this summer. Anthony Vaccarello Puts His Own Brand On Hold to Focus on Saint Laurent. Anthony Vaccarello, the brand, is taking a break. 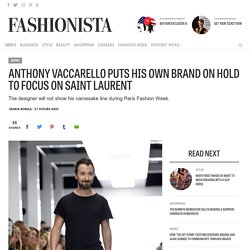 The designer announced on Tuesday morning that he has put his sexy womenswear line on hold to focus on his creative director role at Saint Laurent. His namesake label, which launched in 2008, has no plans to show during Paris Fashion Week. Dior appoints first-ever female creative director Maria Grazia Chiuri. 224-Year-Old Goyard Seduces Luxury Giants. PARIS, France — Only the really wealthy know Goyard. 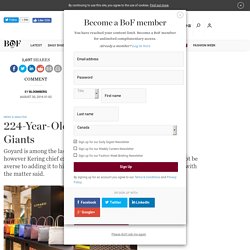 Unlike Gucci or Louis Vuitton, the more than 200-year-old Parisian maker of luxury luggage and bags — with one of its 19th-century-style trunks going for €52,380 ($59,315) — maintains a studied silence. It does not advertise in glossy magazines, and is among the last of its kind not swallowed up by a larger peer. So far, that is. Kering chief executive officer Francois-Henri Pinault would not be averse to adding it to his company’s stable of brands, a person familiar with the matter said. While neither Kering nor its larger rival LVMH Moët Hennessy Louis Vuitton will officially comment on whether they are interested in Goyard, industry observers say it is unlikely they would pass up a chance to consider buying it. Burberry and Tom Ford Announce See-Now-Buy-Immediately Collections for September. What a day of drama! 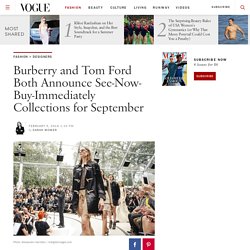 February 5, 2016 might go down in history as the day it sank in that the whole fashion system is about to reconfigure. Hot on the heels of Burberry’s announcement that it will be launching a see-now-buy-immediately women’s and men’s show in September, Tom Ford has declared the same thing. Ford has called off press previews of his Fall 2016 collection, which were scheduled in New York for next week, and will show and sell the offering, all in one go, in September. “In a world that has become increasingly immediate, the current way of showing a collection four months before it is available to customers is an antiquated idea and one that no longer makes sense,” Ford said in a release. “Our customers today want a collection that is immediately available . . . Prada predicts return to growth in 2017 after first half profits slump. PARIS Italian luxury goods maker Prada (1913.HK) predicted a return to sales and profit growth next year, partly helped by improved sales trends in China, after posting a 25 percent drop in first-half underlying earnings and net profit. 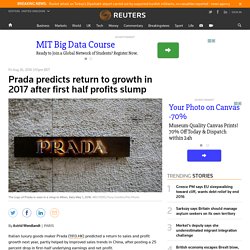 The group, which has been hard hit by the global luxury spending slump, said in a statement it saw 2016 as "a turning point from where the group will return to growth. " "We expect growth to come back after this year," Prada Chairman Carlo Mazzi told Reuters in an interview. Later in a call with analysts, Mazzi said the group expected both sales and profit growth to return in 2017. Last time Prada's sales rose on a like-for-like basis, excluding currency effects and a boost from new stores, was in 2014. 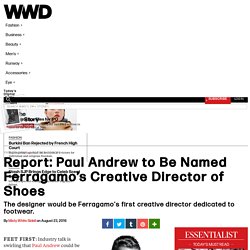 If hired, this role would add to Andrew’s already-steep roster of daily tasks. He, of course, designs a namesake men’s and women’s brand sold at luxury retailers including Bergdorf Goodman, while also consulting on shoe designs for firms including Via Spiga and Theory. Andrew honed his talent at Donna Karan, where he worked for nearly a decade — rising to the role of vice president, design, shoes and accessories. Givenchy Set to Launch ‘Essentials’ Collection at Isetan – WWD. Riccardo Tisci is launching a new line of basics for Givenchy, and the collection will first be available exclusively at the iconic Isetan department store in Tokyo’s Shinjuku district. 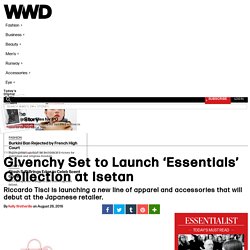 From Sept. 7 through 13, Givenchy Essentials will be sold at both the main Isetan store and the neighboring men’s building. In the main building, the red-tiled event space will form the background for the women’s Essentials collection, the key colors of which will be black, white and pastel pink. The pop-up will carry various sizes and colors of Givenchy’s new Horizon series of bags and wallets (62,640 to 248,400 yen, or about $557 to $2,208) for a total of over 30 variations, including a pink series that won’t be available anywhere else in the world. Luxury Daily. Philanthropy and charitable contributions have emerged as essential elements of a fashion brand’s image, according to a new report from Fashionbi. While galas, auctions and sponsored fashion shows have never been abnormal, a growing number of big-name brands, including Versace, Burberry, Bulgari, Cartier and Gucci, have established or teamed with charity foundations dedicated to specific causes in recent years.

Consumers naturally aspire to luxury brands, thus transforming brands into role models that must demonstrate genuine concern for social causes in order to maintain that interest from consumers. "Taking philanthropic actions every now and then works in the favor of the brands, and if implemented rightfully, can generate an accelerated emotional liking toward the brand and turn their potential customers into loyal brand advocates,” said Ambika Zutshi, CEO of Fashionbi, Milan. Gucci Among World’s Hottest Fashion Brands, While Prada Cools. LONDON, United Kingdom — Gucci has been named one of the “hottest” luxury brands, while Prada and Giorgio Armani are “cooling” fast, according to a new report by Exane BNP Paribas. The financial services firm assessed the “brand temperature” of luxury companies, based on the ratio between the editorial coverage they receive in print magazines, and their print advertising spend.

Brands are ranked as “hot” if magazines give them more editorial space than their advertising spend should warrant, meaning they have more editorial coverage than print magazine advertisements — reflecting a “hot” level of appeal and desirability — whereas brands that fall below this ratio are “cold.” Gucci’s editorial value was up more than 15 percent for the first six months of the year, compared to the same period last year. Louis Vuitton and Chanel both also ranked as “hot,” but their editorial value grew at a lower rate of between 0 and 15 percent, despite a high print advertising spend. Burberry's Christopher Bailey makes way for new CEO. Burberry’s chief executive, Christopher Bailey, is to cede control of the company’s day-to-day management as part of a boardroom overhaul amid criticism from investors.

The luxury goods veteran Marco Gobbetti will take over as chief executive in 2017, leaving his position at the helm of French luxury brand Céline. Bailey will hand over the daily running of the business to become president. He will also retain his role as chief creative officer, a position he previously held alongside the CEO job, to the dissatisfaction of some investors.

Investors and retail experts welcomed the handover, which they said would help Burberry cope with falling profits due to flagging demand for luxury goods in markets such as China and Russia. Emanuel Chirico on the Unifying Virtues of Raf Simons at Calvin Klein – WWD. Just three weeks in, PVH Corp. chairman and chief executive officer Emanuel Chirico is starting to tout the Raf Simons era at Calvin Klein. And Simons — the former artistic director for women’s at Christian Dior, who joined the brand chief creative officer after months of well-traveled rumors — already has something of a running start. Calvin Klein revenues gained 12 percent in the second quarter, helping push PVH’s revenues up 3.7 percent to $1.93 billion. On a call with Wall Street, where Chirico did something of a victory lap to tout the quarter, when adjusted profits also gained, analysts were keen to know what the new creative lead would mean for the brand.

Unpacking Calvin Klein's Wildly Successful #MyCalvins Campaign. An unpaid, authentic post by a friend endorsing a brand is more powerful to young people than obviously paid-for influencer posts, a print ad, or a celebrity endorsement, though the #MyCalvins campaign has relied on all of these at one point in time. Below, we break down how Calvin Klein expertly culled from the past and leveraged influencers and celebrities of the present to impressively explode the organic endorsement of #MyCalvins. Nostalgia The hashtag language references a memorable 1981 television ad for Calvin Klein Jeans featuring a teenage Brooke Shields whispering, "You wanna know what comes between me and my Calvin's?

Report: Fashion and Automotive Brands Dominate Social Media. Fashion Label Shuffle: Designer Changes To Know Ahead of Fashion Week. Burberry Is Going on a Product Diet. Fashion asks for criticism, but it really only wants praise. The Selfie-Stick Fashion Generation.