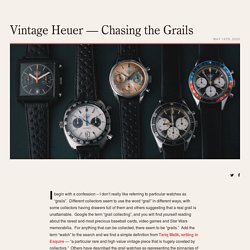 Different collectors seem to use the word “grail” in different ways, with some collectors having drawers full of them and others suggesting that a real grail is unattainable. Google the term “grail collecting”, and you will find yourself reading about the rarest and most precious baseball cards, video games and Star Wars memorabilia. For anything that can be collected, there seem to be “grails.” Add the term “watch” to the search and we find a simple definition from Tariq Malik, writing in Esquire — “a particular rare and high value vintage piece that is hugely coveted by collectors.” Windsor 5 Piece Watch Box. The Home of Vintage Heuer Collectors. The Heuer Carrera is perhaps the most famous wristwatch made by Heuer- a chronograph that sums up the Heuer brand and stands as the link between the past, present and future of TAG Heuer. 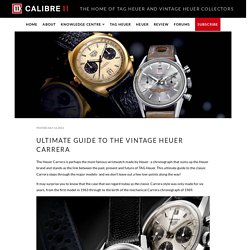 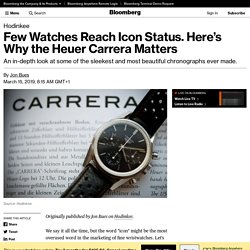 We say it all the time, but the word "icon" might be the most overused word in the marketing of fine wristwatches. Let's be honest: Not everything is an icon. In fact, very few watches are. One that can, without a doubt, hold this vaunted title is the Heuer Carrera. The clean, no-nonsense watch debuted over half a century ago and helped set a course for decades of watch design that goes far beyond the confines of racing watches or chronographs. 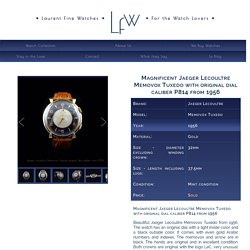 The watch has an original dial with a light inside color and a black outside color. It comes with even gold Arabic numbers and indexes. The memovox and arrow are in black. The hands are original and in excellent condition. Both crowns are original with the logo LeC, very unusual. The story of Lecoultre started in 1833 with Charles Antoine LeCoultre. Caliber P814 with number 1109085 and engrave Jaeger Lecoultre - Fab Suisse Swiss.

Diameter excluding winding crown: 32mm Length including lugs: 37.5mm. 5008-1130-71S. Speedy Tuesday - Hands-On With The Omega Speedmaster CK2998 Pulsometer. Some expected a new Speedmaster Speedy Tuesday in BaselWorld, but instead Omega surprised us with a number of other Speedmaster novelties. 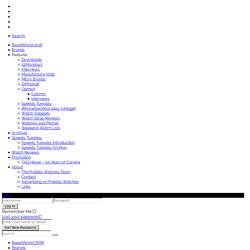 The Apollo 8, a Speedmaster Moonphase Master Chronometer in blue ceramic with Aventurine dial and three variations of those in full platinum. More about those later, because first I want to shed the light on the new Speedmaster CK2998 Pulsometer that they released for this year. This watch is based on the original CK2998 reference that was introduced in 1959 and is the 2nd generation Speedmaster. It was in production up to 1962 and succeeded by the 105.002 and 105.003.

Flawed genius: A Seiko Lord Matic 5606-8010. Navigating one’s way around the vintage Seiko model hierarchy is in one sense straightforward but in another extremely perplexing. 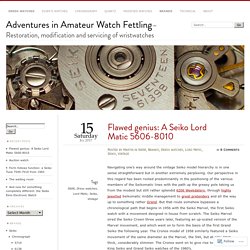 Our perspective in this regard has been rooted predominantly in the positioning of the various members of the Seikomatic lines with the path up the greasy pole taking us from the modest but still rather splendid 6206 Weekdaters, through highly jewelled Seikomatic middle management to great pretenders and all the way up to something rather Grand. But that route somehow bypasses a chronological path that begins in 1956 with the Seiko Marvel, the first Seiko watch with a movement designed in house from scratch.

The Seiko Marvel sired the Seiko Crown three years later, featuring an up-scaled version of the Marvel movement, and which went on to form the basis of the first Grand Seiko the following year. The Cronos model of 1958 similarly featured a Seiko movement of the same diameter as the Marvel, the 54A, but at only 4mm thick, considerably slimmer. Like this: Specializing in Vintage Watches, Antique Watches and Swiss Chronograph Watch Repair by Farfo. Buying a Vintage Watch Just Got a Whole Lot Simpler. Hong Kong & Macau - Preowned. Just an update , also incorporating members suggestions (thanx): HONG KONGKen’s Watches www.kenwatches.com - 3 locations (see website), pretty good selection, fair pricing. 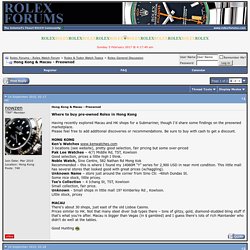 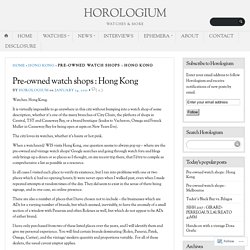 Hong Kong. It is virtually impossible to go anywhere in this city without bumping into a watch shop of some description, whether it’s one of the many branches of City Chain, the plethora of shops in Central, TST and Causeway Bay, or a brand boutique (kudos to Vacheron, Omega and Franck Muller in Causeway Bay for being open at 11pm on New Years Eve). The city loves its watches, whether it’s haute or hot pink. When a watchnerd/ WIS visits Hong Kong, one question seems to always pop up – where are the pre-owned and vintage watch shops? Google searches and going through watch fora and blogs only brings up a dozen or so places so I thought, on my recent trip there, that I’d try to compile as comprehensive a list as possible as a resource. In all cases I visited each place to verify its existence, but I ran into problems with one or two places which a) had no opening hours; b) were never open when I walked past, even when I made repeated attempts at random times of the day. 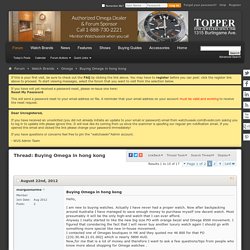 Actually I have never had a proper watch. Now after backpacking around Australia I have managed to save enough money to purchase myself one decent watch. Hong Kong Watch Shopping Wonderland. “Watch overload.” 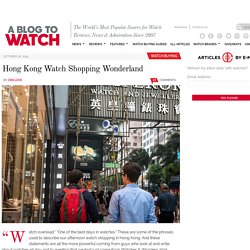 “One of the best days in watches.” These are some of the phrases used to describe our afternoon watch shopping in Hong Kong. And these statements are all the more powerful coming from guys who look at and write about watches all day, not to mention that we had just come from Watches & Wonders 2015, where we got to play with and photograph all the Richemont Group brands’ haute novelties. What, then, got us so excited about these dingy little watch stores with hand-written price tags? Come along as aBlogtoWatch explores the cluttered streets and hidden watch stores of Hong Kong... You may have heard that Hong Kong is a watch shopping paradise, but you may have also heard that the deep discounts the city was once known for are now a thing of the past. DeskDivers.com - Hong Kong Watch Shopping Guide. Modern watch purchases... Well you cant usually go wrong with buying new in Hong Kong as there is almost always some discount to be had even on the already tax free prices.

Whilst this discount seems to be slowly eroding over time, typically Rolex and Tudor is 5% (was 8% in 2008 and 10% in 2007), Omega 10%, Breitling 25% (30% in 2009) etc etc. The Boutique shops wont discount at all (like any Boutique in any city in the world) so look for a normal AD. Limited and hard to find watches are usually not discounted at all, so don’t expect to get a discount on something like a stainless steel Daytona, in fact we would be very surprised if you even found one at an AD. One thing we have noticed is that locals and those with strong haggling skills can improve on the standard discounts, but many (most!) The RGM 801 Corps Of Engineers Watch With Enamel Dial.